Hillary Clinton was put on defense at Thursday’s Democratic debate when it came to the controversial 1994 crime bill that her husband passed as president.

The Violent Crime Control and Law Enforcement Act that President Bill Clinton signed built more prisons and increased the number of federal and death-penalty crimes. Hillary Clinton lobbied for it in Congress, but it has since come under criticism for fueling the rise of mass incarceration, with a racially disparate impact.

When asked if she thought the bill was “a net positive” or a mistake, Clinton struggled to respond. “I think that it had some positive aspects to it,” she said, citing the violence against women act. “So if we were to have the balance sheet on one side there are some positive actions and changes. On the other side there were decisions that were made that now we must revisit and we have to correct,” saying that nonviolent sentences have become too long.

Clinton also deflected responsibility for the bill, saying, “My husband has apologized. He was the president who signed it. Senator Sanders voted for it. I’m sorry for the consequences that were unintended and that had a very unfortunate impact on people’s lives.”

(On the trail stumping for his wife, Bill Clinton has tangled with Black Lives Matter activists on both the 1994 crime bill and the 1996 welfare reform legislation.)

Sanders, who voted for the crime bill while he was in the Senate, swiped at Clinton in a slightly different direction: on her infamous 1996 remarks when she referred to kids with “no conscience, no empathy” who committed crimes as “superpredators.” 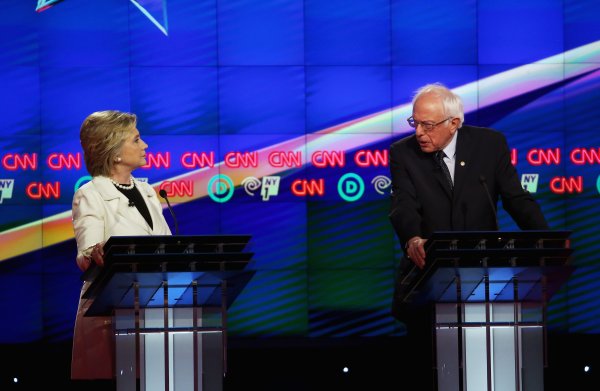