Courtesy Bridges Over Politics for New Jersey
By Philip Elliott

New Jersey Governor Chris Christie’s endorsement of Donald Trump is being mocked by a new nonprofit that was set to launch Friday.

Bridges Over Politics for New Jersey plans to post billboards and online ads calling on Christie to denounce the rhetoric that has propelled Trump to the top of his Republican Party — and has turned off vast blocs of female, Hispanic, black and young voters. The first ads started to appear in Trenton, N.J., on Thursday.

In one such billboard, Christie is pictured standing behind Trump with a thought bubble leaving the governor thinking to himself: “Help.” The group then urges Christie to “speak out against racism, sexism and bigotry, don’t stand behind it.” Another billboard simply captions the same image as “sad.”

A Christie spokesman brushed off the billboards. “What’s sad is that anyone would give this a second look,” Brian Murray said.

Bridges Over Politics is organized under the tax code as a “social welfare” nonprofit, which means politics cannot be its main focus. Unlike super PACs, these nonprofit groups do not have to disclose their donors. But it’s worth noting that Bridges Over Politics is being run by Aaron Keyak, a Washington, D.C.–based Democratic operative and a former top aide to ex- Representative Steve Rothman of New Jersey.

“It’s sad that Governor Christie refuses to strongly speak out against racism, sexism and bigotry — including the hateful rhetoric of Donald Trump,” Keyak said, pledging to continue these ads through the end of Christie’s term in early 2018. “Governor Christie’s legacy will be held hostage unless he speaks out and history will remember him as a sad governor.”

The “hostage” jab is a particularly pointed one, given the images of that emerged after one painful Trump news conference when Christie stood over his shoulder with facial expressions that suggested he was uncomfortable. Christie endorsed Trump after his own presidential bid failed to gain traction.

Many Republican leaders fret that the party will lose the election in November with Trump as a nominee who alienates so many voters. The #NeverTrump efforts are trying to deny him the required 1,237 delegates needed to secure the nomination when Republicans have their convention in Cleveland, although it’s not clear that it is possible. 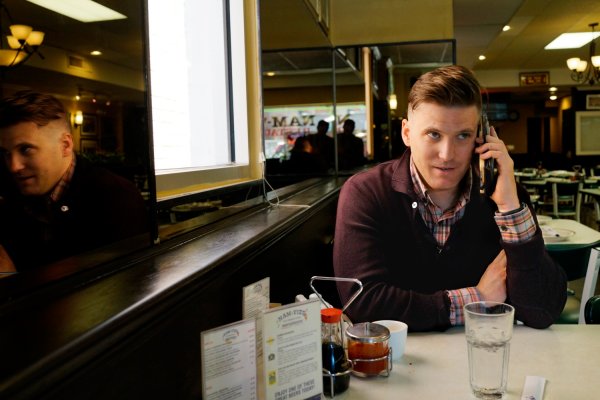 The Billionaire and the Bigots
Next Up: Editor's Pick