How Activists Are Restricting Use of a Major Pesticide

A tassel of corn grows in a field on Pioneer Hi-Bred International land in Waialua, Hawaii, on April 16, 2014.
Audrey McAvoy—AP
By Justin Worland

Glyphosate, the world’s most widely-used herbicide, has become a major target for environmentalists. But despite growing evidence of the chemical’s potentially dangerous health effects—the pesticide was deemed a “probable human carcinogen” by the World Health Organization last year—efforts to ban the chemical in the U.S. have repeatedly failed. Supporters of glyphosate, which is often used together with genetically modified crops, respond that no study has proven that the chemical definitively causes cancer in humans, and note that the pesticide effectively protects crops that feed millions around the world.

But on the Hawaiian island of Maui, nearly 5,000 miles from the offices of federal regulators in Washington D.C., a small group of activists have figured out how to use a little-known provision of a federal law to stop some uses of glyphosate in their community. The law is known as FIFRA, short for the Federal Insecticide, Fungicide, and Rodenticide Act, and it requires pesticide sprayers to do something you might imagine they’d be doing anyway: follow the safety instructions on the product’s label down to the letter. But because those safety instructions can be difficult to meet, activists have been able to use the label to force sprayers to change their ways.

Read More: How to Make Better Pesticides Without Chemicals

“Most people are unaware that that’s a requirement of the label. They just spray it and think it’s safe,” says Brad Edwards, a social worker turned anti-pesticide campaigner in Hawaii. “This now means that government, individuals, condo associations—they need to take measures to keep people and pets off sprayed areas until they dry.”

For products containing glyphosate, following the label means keeping people away from the area where the product has been used for four hours after applications for agriculture, or until the product dries when sprayed for non-agricultural purposes—a time period that varies. That can be difficult in places like long stretches of roads and highways where extended monitoring to keep people away from recently sprayed areas is virtually impossible. But for a long time in Maui, as in many communities across the country, pesticide sprayers simply sprayed and moved on—and no one bothered to hold them to the safety directions of their own product.

Enter Hawaii’s activists. The effort on Maui to curb glyphosate gained momentum last year as parents began to circulate photographs of government employees spraying Round Up, the primary commercial product containing glyphosate, according to Elle Cochran, a Maui County council member. Footage showed authorities spraying on highways, roads and near schools without any visible effort to keep people away.

Edwards first grew concerned early last year when he saw a truck spray along a road near his home, shortly before children were due to walk through the area for an event. He began a long process of complaints, taking the issue to various state agencies, but received little response. Finally, he and other activists reached Stephen Rodgers, who oversees pesticide application on Maui’s state highways. The uncertainty raised by activists over the labeling issue was enough to convince Rodgers to make the eventual switch to organic pesticides. His department no longer purchases Roundup and will stop using the product entirely once the existing supply has been exhausted.

“We don’t have sentries, we post signs, and the signs just say ‘herbicide spray.’ There’s an issue and we haven’t fully solved it yet,” says Rodgers. “We had this ever increasing public scrutiny, and we’re here to maintain highways and not here to get into this.”

The change has motivated activists who say that the labeling issue will force change across the state. And, while efforts thus far have focused on voluntary action, activists have heard rumors of litigation and investigations into how glyphosate is used in Hawaii. “It has become common knowledge amongst Maui County residents that ‘the label is the law’ and just how vital it is to follow the label requirements in order to ensure public health and safety,” says Cochran. An Environmental Protection Agency (EPA) official declined to comment on the record on glyphosate use in Hawaii.

The Hawaii activists are not the first to realize the potential for using the labeling law to challenge practices on glyphosate, says Michael Hansen, senior scientist at Consumers Union, a consumer advocacy group. “If a law is not being enforced, people and companies will just ignore it until they’re told not to,” he says. But “to just say this is too burdensome, that’s not a defense.”

Edwards and his fellow activists hope to take the campaign national, encourage concerned parents in thousands of communities across the country to use labeling law to restrict glyphosate use. But supporters of glyphosate suggest that the Hawaii campaign has little basis, arguing the pesticide has 40-year history of safe use. Monsanto, which markets glyphosate as part of the pesticide Roundup, says that the science behind glyphosate shows that it is safe. A company spokesperson said that Roundup labels “comply with applicable regulations” and the spray takes “very short time to dry.”

“The safety of our products is our top priority,” a Monsanto spokesperson says. “In regard to glyphosate, let’s be clear: glyphosate is not a carcinogen and no pesticide regulator in the world considers it to be one.” The EPA is currently reviewing whether glyphosate qualifies as a human carcinogen and has said a ruling should be expected by the end of the year.

Farmers have employed glyphosate for decades. But use of the pesticide exploded in the early 2000s with the introduction of genetically-modified crops that are design to resist the pesticide. And as use of the chemical increased—from 11 million pounds annually in 1987 to nearly 300 million in 2013—so did the number of studies suggesting health concerns. Most significantly, significant exposure to glyphosate in farm workers has been linked to increased risk of non-Hodgkin lymphoma, a type of cancer. Other research has shown a link between glyphosate and cancer in mice. The International Agency for Research on Cancer (IARC), a branch of the World Health Organization (WHO), ruled last year that the pesticide is a “probable human carcinogen.”

At the same time, a number of prominent studies have found that glyphosate used on crops does not pose a health risk to humans. The Food and Agriculture Organization (FAO), a separate branch of the WHO, said this week that that pesticide is “unlikely to pose a carcinogenic risk to humans.” The European Food Safety Authority has also said that glyphosate was “unlikely” to contribute significantly to cancer in humans. The EPA is behind schedule in a review of the chemical but has continued to approve products containing the pesticide.

“For a long time glyphosate was viewed as an innocuous herbicide,” says Dr. Philip Landrigan, dean for global health at Mt. Sinai Hospital in New York. “A lot of things have changed.” 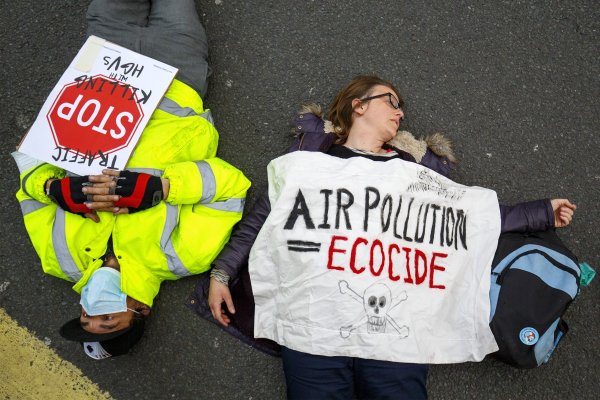 Global Air Pollution Is on the Rise
Next Up: Editor's Pick