How Bernie Sanders Became a Superdelegate

Bernie Sanders and his supporters hate the Democratic Party’s insiders known as superdelegates so much that they’re posting those elites’ names online in the hopes of bullying them into backing the Vermonter. They often omit this fact: Sanders himself is a newly minted one.

Sanders last year joined the ranks of former Presidents, House Speakers and Senate Leaders who can vote for White House nominees independent of how their home states cast ballots. All Democratic Senators are given that rank, and the Democratic National Committee gave Sanders that standing when after he chose to run in the Democratic primary. Sanders still considers himself a democratic socialist and his Senate office calls him an independent.

“When the Senator declared, he became eligible,” a Democratic official said. In doing so, he availed himself of the privilege of being among the party’s elite. He is listed between between fellow Vermont Senator Patrick Leahy and former Vermont Governor and ex-DNC Chairman Howard Dean on page eight of the party’s roster. (Former President Bill Clinton is also there, on page six.)

More than 700 superdelegates—15% of all voting members at the Philadelphia convention—will back either Sanders or Clinton in July. A vast majority of them (nearly 500) already have thrown their support behind Clinton, and many Sanders supporters have called foul, calling their clout undemocratic.

Sanders for months was dismissive of their role, but in recent weeks has shifted his tone. He now says can swing superdelegates over to his campaign, but doesn’t mention he is one himself. “When a lot of these so-called superdelegates begin to see which candidate is the strongest candidate” in a general election against Sen. Ted Cruz and Donald Trump, Sanders said on the Nightly Show with Larry Wilmore on Wednesday, “I think some of these guys are going to be coming our way.”

Liberal groups and activists have begun petitions to have the superdelegate process overhauled, protesting that it leaves Sanders at a disadvantage. “The race for the Democratic Party nomination should be decided by who gets the most votes, and not who has the most support from party insiders,” said MoveOn.Org in one such petition. (Democrats responded to protests like these after the 2008 campaign. The share of superdelegates dropped from 20% of convention participants to 15%.)

At least one of Sanders top advisors has also said he opposes the superdelegate system. As former president of the Communications Workers of America Larry Cohen told Reuters: “I’m a superdelegate to fight to end superdelegates.”

Those party insiders, however, might be Sanders’ only route to the nomination. Despite a recent string of wins, he is still 2.5 million votes behind Clinton and roughly 250 pledged delegates behind her. He is almost certain to arrive at the convention without enough delegates to win the nod, and Clinton’s pile of superdelegates makes it even more difficult.

Sanders’ enthusiastic supporters have cobbled together a list of all superdelegates, including their contact information. It’s original name? The Superdelegate Hit List. Its organizer, Spencer Thayer, is upfront about the purpose: “Who wants to start a new website aimed at harassing Democratic Superdelegates?” 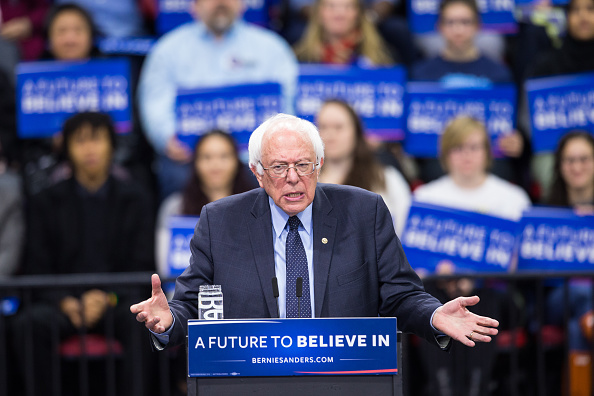 Why Bernie Sanders Is Talking About Poverty
Next Up: Editor's Pick