Judge Kenesaw Mountain Landis, commissioner of baseball from 1920-1944, sitting in profile in the stands at a baseball game in an outdoor stadium in Chicago, 1929.
Chicago History Museum / Getty Images
By David Kaiser

Like most of his works, Ken Burns’s four-hour documentary on Jackie Robinson, which screened this week on PBS, made wonderful use of archival footage and interviews to recreate the past. Though there are few men alive who actually played with or against Robinson, far more people survive to discuss his at least equally interesting life after baseball. The unchallenged star of the show was Robinson’s widow Rachel, a sensitive, highly intelligent and caring woman who seemed to embody the best of her and her husband’s generation. In one respect, however, the documentary fell short: it broadcast a relatively recent myth about a great American, the first commissioner of baseball, Judge Kenesaw Mountain Landis.

The documentary, written by David McMahon and Sarah Burns, identifies Landis as “an implacable foe of integration,” and strongly suggests that Dodgers manager Branch Rickey only dared to sign Robinson in 1945 because Landis, “who had done more than any other to perpetuate baseball’s color line, had died.” As it happens, there is no evidence to support the first contention, and ample evidence to show that the second one is utterly without foundation.

The myth that Judge Landis—a man of great integrity who banned 22 players for gambling offenses after the revelation of the Black Sox Scandal and administered organized baseball with an iron hand from 1921 until his death in 1945—was a key foe of integrating organized baseball seems to come from Jules Tygiel’s otherwise excellent book, Baseball’s Great Experiment (1983), but it now seems that Tygiel did not see critical contemporary primary sources. It is true that the 16 major league owners consistently refused to sign Negro players (as they were called then) during his tenure, but Landis’s biographer David Pietrusza found no evidence that Landis either favored this policy or harbored any especially racist beliefs himself.

It would have been ironic if he had: his own father was wounded fighting the Confederacy at the Battle of Kennesaw Mountain, an event after which he decided to name his son. And on at least one occasion, Landis took firm action against racism. In July 1938, a New York Yankees outfielder, Jake Powell, gave a radio interview before a game in Chicago and talked about his off-season job as a policeman in Dayton, Ohio. He referred specifically to using his night stick on Negroes—but he used a different word. Within 24 hours, Landis had suspended him for a full ten days. This was a typically vigorous exercise of his authority, and his leadership style had won the respect of white and black Americans alike. On Feb. 22, 1941, the black newspaper the Chicago Defender printed a letter suggesting that the Negro Leagues could use a powerful commissioner like Landis, as well.

The Second World War and the draft that accompanied it, which brought men of all races into the service of their country, increased pressure from the civil rights movement on many fronts, including organized baseball. For the first time, discrimination in employment became a legal issue, thanks to an executive order from President Roosevelt banning job discrimination in defense industries. In June 1942, the outspoken manager of the Dodgers, Leo Durocher—who later managed Jackie Robinson—was quoted in the Communist Daily Worker, of all places, saying that there were several Negro players he would like to have on his team, “if there were no rules against it.” Commissioner Landis, as he often did, asked Durocher to come see him on the Dodgers’ next visit to Chicago, and asked him what he was talking about. Then Landis issued the following statement:

The owners, not Landis, had effectively banned black Americans from organized baseball, and it was up to them to do something about it.

A year and a half later, in December of 1943, a delegation of Negro publishers and politicians made a presentation to the 16 owners at the major league meetings in New York asking for integration. The black reporter Wendell Smith of the Pittsburgh Courier—who figures prominently in the new documentary—reported on the proceedings. “‘I want it clearly understood,’ thundered gray-thatched Kenesaw Mountain Landis to 44 owners and officials of major league teams at the Roosevelt hotel here in New York last Friday morning, ‘that there is no rule, nor to my knowledge, has there ever been, formal or informal, or any understanding, written or unwritten, against the hiring of Negroes in the Major Leagues!'” Smith’s story began.

Photos: LIFE With Jackie Robinson: Rare and Classic Photos of an American Icon

The next day Smith interviewed Landis personally. “I told Landis that he had made millions of Negro and white friends throughout the country by his uncompromising stand on Negro ball players,” he wrote. “‘I am glad to know that,’ [Landis] said. ‘Perhaps something will develop. I don’t know.'”

As it turned out, no owner took any active steps to sign a Negro player during 1944, and Landis died in November of that year. When his successor, Kentucky Senator Albert “Happy” Chandler, indicated that he had no objection to Negroes playing major league baseball, he was following in Landis’s footsteps—not breaking new ground. Only Landis’s death deprived him of the opportunity to welcome Jackie Robinson and other Negro recruits into organized baseball.

Throughout his life, as his magnificent autobiography, I Never Had it Made shows, Jackie Robinson carefully judged everyone he met—black and white—based on their own words, actions and character. The new documentary, sadly, betrays that legacy by repeating allegations against Judge Landis—a great commissioner who did many great things for baseball—that turn out to have no basis in fact. 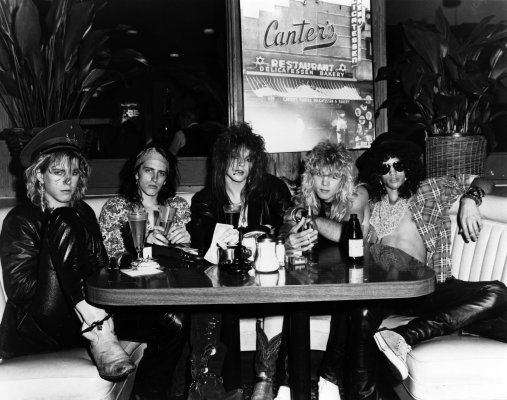 See Early Photos of Guns N' Roses in Action
Next Up: Editor's Pick