A former al-Qaeda fighter who later became a spy for the British secret service says ISIS views the Britain’s European Union referendum in June with “great interest” , and is likely planning an attack in the U.K. which would persuade voters to leave the E.U.

Aimen Dean—who once swore allegiance to Osama bin Laden in person—tells TIME in an interview in London that Islamist extremists in al-Qaeda and ISIS would see the U.K.’s departure from the E.U. as a first step in the destruction of the union, which they see as a successor to the Roman Empire.

Much of the ideology of ISIS and al-Qaeda is rooted in theories of a clash of civilisation between Muslims and the non-Muslim world, which were formulated in the 7th century when Muslims fought for supremacy with the Byzantine (Roman) Empire and the Persian Empire.

Dean says that recent attacks in Brussels and Paris are also part of a strategy to destroy non-Islamic institutions and states and provoke conflict between Muslim and non-Muslims in the Middle East. This final battle, they believe, has been foreseen in religious writing and will herald the end of the world.

Whatever they [ISIS] can do to break up that empire is justifiable to them, says the former jihadist who became disillusioned with al-Qaeda in 1998 and acted as double agent until 2006, when his name was revealed in a book.

If the referendum result leads to the U.K. leaving the E.U., ISIS will take credit for having struck the first significant blow against the E.U., which it sees as representing the nations that carried out crusades against Muslim states for control of the Holy Lands between 1089 and 1390.

Dean,38, was brought up in Saudi Arabia but embarked on his first jihad in 1994 to fight with Bosnian Muslims against Serb nationalists in the former Yugoslavia. From there he went to Afghanistan where his Islamic education impressed aides of bin Laden.

Dean’s transformation came after the 1998 al-Qaeda attacks on the U.S. embassies in Kenya and Tanzania, which left 224 dead—all but 12 were local civilians. He disagreed with al-Qaeda’s justification for killing civilians and went from al-Qaeda activist to betrayer, with the help of the secret services of Qatar and then the U.K.

Dean, who advises both public and private sectors on terrorism from his base in Dubai, also claims that a civil war within Islam is driving the west towards further Middle East conflict.

He says Muslim communities worldwide are in conflict, similar to the wars of the Reformation in Europe in the 16th and 17th centuries. Militant Sunnis are against aginst Militant Shias, he explains, and Sunnis are engaged in internal conflict, such as ISIS versus al-Qaeda, ISIS and states such as Jordan and Egypt versus the Muslim Brotherhood. “The West is the side casualty,” says Dean.

Foreign Fighters from the U.K., U.S., France, Belgium and other countries suffer from a “deep identify crisis,” says Dean. He says such Muslims who find themselves looking to ISIS don’t relate to their countries of birth, and cling to Islam as an “identity rather than a religion,” which provides them a set of rules and regulations which they chose to obey zealously.

Dean says it is naive to believe that Islamic extremism has been caused by hawkish western foreign policy in the Middle East although the U.S.-led invasion of Iraq played in to the jihadists’ hands. The US-led coalition “didn’t plan enough” for what would happen after the Iraqi invasion. “They went in blind and left even more blind,” he says.

When al-Qaeda attacked the U.S. on 9/11, “they were hoping that there would be an Iraqi and Afghanistan invasion,” he says. By having more “ungoverned spaces they could gain a greater foothold.” ISIS is continuing the tactics of al-Qaeda in trying to provoke the West to deeper involvement in the Middle East in order to create chaos which will help them thrive, he says.

Dean says bin Laden’s influence is not as potent or as relevant as observers would once have predicted. “When you look at the jihadi literature, you don’t see him as revered,” says Dean. He is “one of many” jihadist leaders that lived and will ultimately be killed, “like Musab al-Zarqawi (the founder of ISIS) was killed and Abu Bakr al-Baghdadi—the current leader of ISIS—will also be killed.”

One of Dean’s major messages to the West is that leaders can be killed all the time, but it is the grass roots that provide the momentum for an organization and its next leaders. 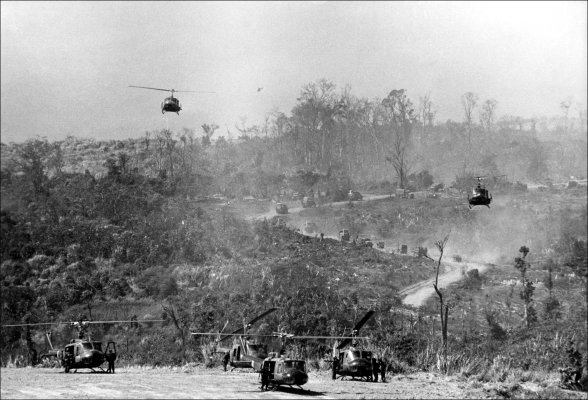 How Fighting ISIS Is Like Vietnam
Next Up: Editor's Pick