It was a year ago that Ram Giri’s home imploded. The earthquakes that killed nearly 9,000 people in Nepal in April and May 2015 twisted the brick walls of the two-room structure, spilling the exterior into what had been the family’s living space. To keep what’s left stable, Giri spent his savings on wooden trusses to hold up the walls. “It can collapse at any moment,” he says, gazing over his village in the country’s Sindhupalchok district, still strewn with debris from the 7.8- and 7.3-magnitude quakes. All around him, desperate villagers remain stuck in shaky tarpaulin tents and small tin sheds that seem barely strong enough to withstand the monsoon rainstorms due this summer, let alone another temblor in this earthquake-prone nation.

It wasn’t meant to be this way. With the damage from the quakes estimated at about $7 billion, international donors stepped up to aid Nepal, pledging $4.1 billion in assistance for the desperately poor country. But the money for rebuilding homes has yet to reach victims like Giri. Instead of focusing on reconstruction, Nepal became consumed with a protracted political battle over a new constitution that had been in the works since the monarchy was abolished in 2008. “This was a moment to focus on rebuilding the country, but the priorities were all wrong,” says C.K. Lal, a prominent Kathmandu-based political commentator.

The departure of Nepal’s royal rulers had been preceded, two years earlier, by the end of a decadelong insurgency by Maoist rebels that claimed more than 10,000 lives. In the years since, two separate efforts to write a new constitution became mired in political squabbles over the structure of the infant Federal Republic of Nepal. With the earthquakes, the country’s major political parties decided to fast-track the constitutional process to clear the way for reconstruction. But the opposite happened, as ethnic groups living along Nepal’s border with India protested that their interests had been sidelined in a new constitution that was hurriedly approved in September. More than 50 people were killed as anger about the new document spread in southern Nepal.

Known as Madhesis, with close language and cultural ties to neighboring India, these communities have long felt marginalized by the Nepalese state. As they protested, the border was blocked for up to 135 days, leaving trucks carrying badly needed fuel and food stranded in India, which surrounds Nepal on three sides. Amid the political bickering–Nepal blamed India for fanning the unrest; New Delhi denied the charge–reconstruction was derailed. “It’s politics, not rebuilding, that has dominated over the past year,” says Prashant Jha, author of Battles of the New Republic: A Contemporary History of Nepal.

The fallout is clear to see in the troubled record of Nepal’s National Reconstruction Authority (NRA), the state agency responsible for the rebuilding effort. First proposed in June, it wasn’t until December that the NRA was finally given legal backing. It took until mid-March for the first rebuilding funds to be distributed to quake victims in a section of the country’s hard-hit Dolakha district. Nepal’s Prime Minister K.P. Oli acknowledged the problems on March 29, when he said that “the reconstruction work is not going to end even in decades at this pace,” according to the Kathmandu Post.

Meanwhile, there are fears of renewed violence. The borders reopened after politicians in Kathmandu amended the constitution this year to placate the protesters. But as analysts warned this month, the changes don’t fully address the Madhesi demands, leaving the door open to further turmoil.

It’s a prospect that fills Giri with dread. Before the earthquake, he earned close to $200 a month as a driver for a local businessman. His wife worked part time at a farm. But the quake devastated farming, and Giri lost his job when protests blocked the supply of diesel to Nepal. Though supplies have resumed, fuel remains scarce. Giri says he is lucky if he drives more than one or two days a week. He spends the rest of the month working as a laborer. “At the end of the month, we now have $30, maybe $40, for a family of four,” he says. “Our home has been destroyed. Who knows when the government will rebuild it? They say they will give us money to rebuild it. When? Next year?”

–With reporting by KAI SCHULTZ/KATHMANDU 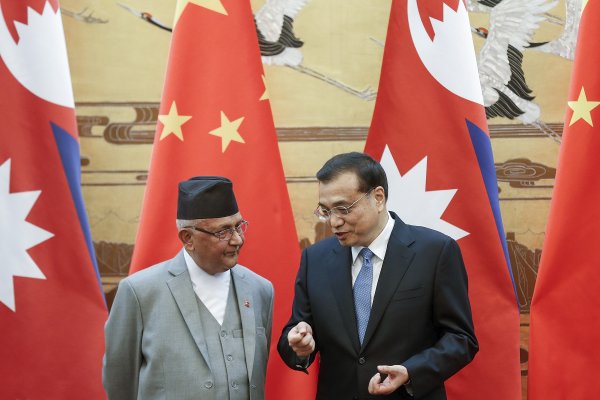 Nepal's Balancing Act Between India and China
Next Up: Editor's Pick