As the pews filled at New Shiloh Baptist Church on Easter Sunday, the theme of the Rev. Harold Carter Jr.’s sermon–Is Jesus Here Now?–seemed fitting. Here in West Baltimore, where abandoned homes outnumber businesses and murders are often the only thing that makes news, the past 12 months have felt more like the devil’s work than that of a higher power. “If He is not here,” said Carter from the pulpit, “it certainly would explain a lot of things.”

New Shiloh sits at the spiritual nexus of a city awaiting resurrection. It was less than a mile away, on April 12, 2015, that Freddie Gray was thrown into a police van before dying of a spinal injury under still-murky circumstances. It was here, in the sanctuary, that Gray’s death was mourned as the latest evidence that black lives don’t matter. And it was four blocks away, at the Mondawmin Mall, that a confrontation between teenagers and police sparked more than a week of peaceful protests and sometimes violent riots.

The year since has been especially trying. Baltimore had 344 murders in 2015, the most per capita in its history, and is on pace for more than 200 this year. The criminal trials of the six police officers charged in Gray’s death have stalled. The police commissioner was fired and the once popular mayor chose not to run for re-election after the unrest, setting off a crowded succession derby that will come to a head in the Democratic primary on April 26–which, in this overwhelmingly Democratic city, might as well be the general election.

Thirteen Democrats are running to replace Mayor Stephanie Rawlings-Blake, all selling their own form of deliverance for this city. Polls show state senator Catherine Pugh, who is campaigning on improving schools and creating jobs, at the front of the pack with Sheila Dixon, a popular former mayor who resigned in 2010 as part of a plea deal on embezzlement charges. To Dixon’s supporters, however, that taint counts for less than the relatively low crime rate during her tenure.

Nationally, the most prominent name in the race is Black Lives Matter activist and social-media star DeRay Mckesson, 30. In the city, however, he’s polling under 1%. “Baltimore is extremely parochial,” says Matthew Crenson, a Johns Hopkins University political science professor.

Which means the election will turn on local concerns, not national debates. And few things here matter more than jobs and crime. Responsibility for the latter falls to Kevin Davis, who was named police commissioner in July. He took over at a time when violent crime was soaring and arrests had plummeted–a combination that Johns Hopkins researchers who studied the relationship dubbed the “Gray effect.”

NYC Protesters Defy Curfew and Remain on the Streets

In his office with views of the east and west sides, Davis says the department has PTSD from the unrest and subsequent indictments of cops, something he believes led to the arrest slowdown. “The city was traumatized by what happened,” he says.

After Davis took command, arrests increased by 20%. He’s emphasized a targeted approach to crime, including an effort with five federal agencies to focus on 600 of the city’s most dangerous criminals. And Davis says he’s tried to improve the department’s ties with the communities it serves. “I think that our relationships, particularly in West Baltimore, are stronger than they were last year,” he says. “But it’s not what it needs to be.” A change, however, isn’t apparent to everyone. “The people who didn’t trust the police before feel the same way now,” says Bamba Kane, 43, a West Baltimore resident.

Before the city erupted, Baltimore seemed poised for a comeback. The city had halted a decades-long population decline. Murders were creeping downward. And downtown’s Inner Harbor was starting to evolve from a tourist showpiece into a real neighborhood. New projects like Port Covington, a multibillion dollar effort led by Under Armour CEO Kevin Plank that would serve as the company’s headquarters while housing a distillery, manufacturing space and a publicly accessible waterfront area, aim to revive that faded momentum.

The question is whether any of the benefits will reach neighborhoods like those near New Shiloh, which few paid any attention to until the city started burning. Toward the end of the Easter service, Carter offered an answer to his opening remark: “You don’t always have to see Jesus to know He’s here.” The same could be said of any of the tensions hanging over Baltimore these days, from the pending trials in Gray’s death to the fragile peace. They’re all here, even if you don’t always see them. 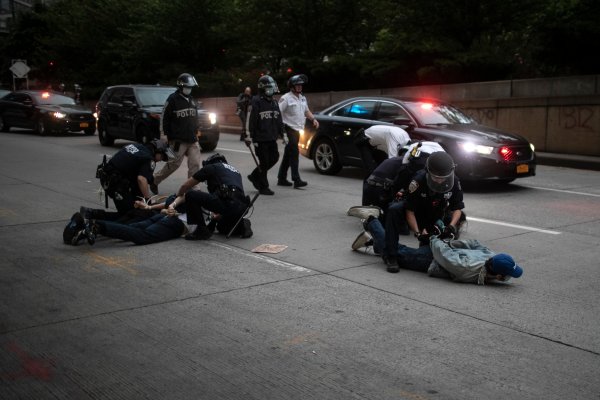