Buddhist prayer flags flutter at a pass overlooking Yamdrok Lake, which is considered one of Tibet's holy lakes. The lake sits at an altitude of more than 13,000 ft.
MCT/Getty Images
By Hannah Beech / Shanghai

The sacred waters of Yamdrok Lake in Tibet shine a brilliant blue green that attracts pilgrims and tourists alike. But earlier this week the focus shifted from the turquoise waters to a semi-naked woman who was photographed by the lakeshore. Images of the scantily clad model were posted — and reposted — on Chinese social media earlier this week, catalyzing debate about whether the nude photo shoot constituted a cultural sin, akin to, say, images of undress in the heart of the Vatican. The lake is believed by locals to be a kind of female Buddhist guardian, and its waters are used to sanctify souls.

By April 14, the People’s Daily, the mouthpiece of the Chinese Communist Party, tweeted in English that the photographer “got 10 days’ detention for taking photos of unclad female tourist at sacred Tibetan lake.” The website of Xinhua, China’s official news service, carried a similar report, with an article noting that the model was being accused of “conduct that did not respect Tibetan culture.”

But details about the model and the detention are murky: a journalist from the Legal Evening News, based in Beijing, reported that a local Public Security Bureau official denied on Thursday morning that any such punishment had been meted out to the photographer or anyone else involved. According to his social-media accounts, the photographer is a professional cameraman nicknamed Yu Feixiong who lives in Lhasa, the Tibetan capital. On his WeChat social-media account, he said that he took the photos because the model wanted “to have some memory of this sacred land” while she was at an age that she considered her optimum (“The girl told me it’s her best age when she travels to Tibet … [Her] youth is leaving.”)

Calls to his cell-phone number trigger a recording that says “unable to connect.” Can Can, a professional model and Yu’s high school classmate, tells TIME: “I can’t contact him, either. He is always a kind and normal person. Before he moved to Tibet, he was based in Hangzhou. He’s atheist. It’s hard to say whether he’s right or wrong this time. I seldom see him taking other naked photos.”

On Thursday afternoon, an official at the local public security bureau from Nagarze county, where Yamdrok Lake is located, told TIME: “We do not know anything.”

One of the first people to repost the images of the unknown model was Jiang Qiang, a tour-guide operator from the southwestern Chinese city of Chengdu who leads trips to Tibet. Jiang, who is from China’s ethnic Han majority, says he has led tours to Yamdrok Lake many times before. “I was shocked when I saw the pictures,” he tells TIME. “Before every trip, I tell my clients to respect Tibetan culture. No spitting, no littering.” He adds that he never bothered to remind tourists to keep their clothes on “because it’s common knowledge.” Jiang thinks the photographer deserves some kind of reprimand. “Without punishment, some people don’t know right from wrong,” he says. “I am Han, but I think everybody should respect Tibetan culture.”

Late on April 11, Jiang’s post was reposted by a woman whose social-media account name is Youchum Dolkar, a Tibetan name. (Many of her previous posts are in Tibetan.) It was from her post that the controversial photos went viral in China. “Such an awesome photographer and an awesome model — it shows there is no bottom line for culture and morality,” she wrote in a critical note accompanying her repost of the offending images. In a brief online chat with TIME, she wrote: “I just want to protect culture. I just wish more people could respect Tibetan culture.”

Even if foreigners are periodically prohibited from visiting Tibet, local tourists have flocked to the high plateau. Last year, around 20 million tourists traveled to Tibet to breathe in the fresh air and explore Tibetan Buddhism, according to the local tourism-development committee. The vast majority of these travelers are ethnic Han. Yet some Tibetans complain that these visitors know little about the cultural and political tensions that have riven the roof of the world.

Since 2009, more than 135 Tibetans have burned themselves in fiery protests against the Chinese Communist Party, whose soldiers marched into Tibet in 1950. Many of the self-immolators used their dying words to call for the return of the Dalai Lama, the exiled Tibetan spiritual leader whom Beijing considers a dangerous “splittist.” (The Dalai Lama has repeatedly asserted publicly that he is calling for meaningful autonomy, not independence, for Tibet.)

Tibetan monks are routinely forced to attend communist indoctrination classes and denounce the Dalai Lama. Ever since deadly race riots in 2008, Lhasa has cowered under a heavy security presence. While Han tourists can freely tour some of Tibetan Buddhism’s holiest sites, local pilgrims are often subjected to stringent security checks.

The impact of local tourism on China’s most remote reaches has provoked controversy before. After hordes of Chinese tourists clambered up — and damaged — glaciers in the northwestern region of Xinjiang, provincial officials banned glacier tourism earlier this year. A previous plan to deploy tour boats on Yamdrok Lake was scuppered after local protests. Meanwhile, perceived bad behavior by Chinese tourists overseas has prompted the occasional ban. One temple in Thailand, for instance, barred mainland Chinese tour groups outright, even though these tourists are a boon to the national economy. There’s little chance Yamdrok would be subject to such a prohibition. Official tourism revenue for Lhasa, some 200 km from Yamdrok, has tripled over the past five years, to $2.42 billion last year. 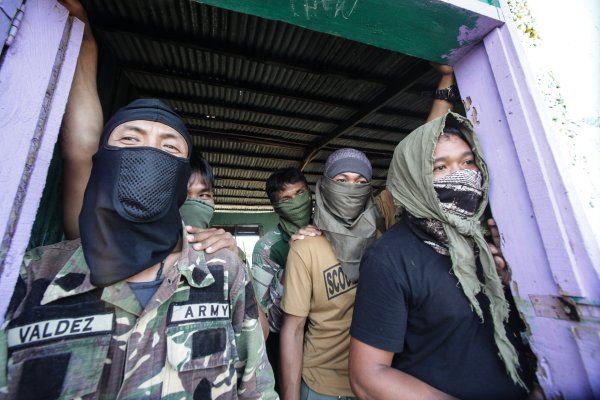 ISIS Is Making Inroads in the Southern Philippines
Next Up: Editor's Pick