Russell Crowe in a scene from "Noah."
Niko Tavernise—Paramount Pictures/AP
By Richard Corliss

God gave Paramount the rainbow sign. In less biblical terms, moviegoers flocked to Noah, propelling Darren Aronofsky’s controversial retelling of the Flood story to a $44 million first weekend at North American theaters, according to preliminary estimates. The word was not so good for another ancient figure of almost biblical stature: Arnold Schwarzenegger’s new movie tanked.

Starring Russell Crowe as the Patron of the First Ark, Noah had affronted some Christian literalists with its giant rock men, its weird visions and the occasionally dark motives of its protagonist. But the film corralled enough religious leaders, including Pope Francis (with whom Crowe snagged an audience), to salve canonical objections. More important, the noise, whether in praise or condemnation, gave the risky venture reams of free publicity that paid off here and abroad, where Noah has earned another $51.1 million. Costing a hefty $130 million to produce, the movie has a prayer of achieving Hollywood’s version of a papal blessing: the black ink of profit on its ledger.

Attracting an audience that was split evenly between men and women, but skewed older — 74% were over the age of 25 — Noah got pasted with a toxic C rating in the CinemaScore survey of first-nighters. Of recent big-budget entries, only The Wolf of Wall Street posted a score that low. But two things: 63% of those polled rated Noah A or B, 23% C and 14% D or F, indicating that the rating is closer to a B or B-minus. And if it equals the nearly $400 million worldwide gross of Martin Scorsese’s coke-broker drama, Aronofsky and Paramount will say hallelujah.

(MORE: Seven Other Movies Based on the Bible)

Fundamentalist Christians proved their clout by sustaining God’s Not Dead. The no-budget movie that debates the existence of the Almighty (and guess who wins) opened last weekend to $9.2 million on 790 screens; this time it added 400 screens and held steady at $9.1 million. It should easily match the mid-$30 million grosses of the 2008 Fireproof and the 2011 Courageous, proving that Bible Belters can be the most enthusiastic members of the indie-film community. When they see the movie light, they go.

(MORE: The Man Who Helps Hollywood Get Religion)

Elsewhere in the top 10, Divergent, the Twilight/Hunger Games wannabe, fell 51% from its winning total last weekend to secure second place. In 10 days the YA adventure has earned $95.3 million, or a bit more than the $94.9 million that the animated feature Mr. Peabody & Sherman, another recent winner, has amassed in 24 days. Muppets Most Wanted, in third place, fell just 33% from its opening weekend, to $11.4 million; but the Jim Henson brand can’t guarantee a substantial theatrical hit. Per theater, the weekend’s biggest tally behind Noah was Wes Anderson’s The Grand Budapest Hotel, which earned $8.8 million in about a thousand venues.

With these films appealing to kids, young women, Christians and art-house denizens, the male audience — once the most cherished and reliable of all Hollywood demographics — should have made a red-meat item like Schwarzenegger’s Sabotage a smash. But the R-rated killer thriller, with Ahnold as the boss of a rogue DEA team, could summon only $5.3 million. By almost any standard, that is the puniest of the muscle man’s career, dating back to the original Conan the Barbarian in 1982.

By comparison, the $6.3 million opening for last year’s The Last Stand, Schwarzenegger’s return to starring roles after two terms as California’s governor, seems almost lofty. That film eventually earned $12.1 million domestic and $36.3 million in foreign markets, where customers still have some nostalgic love for the awesome Austrian, now 66. With help from abroad, maybe Sabotage, budgeted at a thrifty $35 million, will claw its way to break-even. But in North America, when Arnold says, “I’ll be back,” moviegoers say, “Don’t bother.” 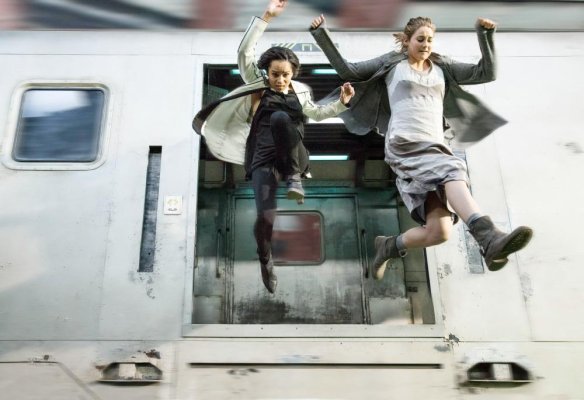 Divergent Dominates Muppets at Box Office
Next Up: Editor's Pick