Sanders’ remarks came after Wilmore asked him whether he believed the Democratic primary system is “rigged.”

“Well, you know,” Sanders said, “people say, ‘Why does Iowa go first, why does New Hampshire go first,’ but I think that having so many Southern states go first kind of distorts reality as well.”

Hillary Clinton has overwhelmingly defeated Sanders in Southern primary contests. In South Carolina, the fourth state in the primary, Sanders’ margin of defeat was a landslide 48 points. A few days after that contest, Sanders lost by large margins in Arkansas, Alabama, Texas, Georgia, Virginia on March 1. Sanders also lost Florida and Mississippi, which vote slightly later that month.

Black voters make up a disproportionate share of the Democratic electorate in those Southern states, and constitute a voting bloc in which Sanders has consistently underperformed. The Vermont senator has been more successful in smaller, whiter and more liberal states like Maine, Washington and Minnesota. Sanders has also been able to win a slightly larger portion of black voters in northern states like Michigan and Illinois, exit polls showed.

Despite his Southern struggles, Sanders insisted to Wilmore that he can win the Democratic nomination, despite lagging by more than 200 pledged delegates. “Our path is with the math,” the Vermont senator said. “We started off this campaign having to run in the Deep South—”

“Trust me, I know about running in the Deep South,” Wilmore interjected.

Sanders laughed and continued. “Since we got out of the South we’re doing pretty well,” he said.

The senator added that he has a stronger chance to win in more progressive states and convert superdelegates—who are not tied to the popular vote in primary states—to support his candidacy.

“When a lot of these so-called superdelegates begin to see which candidate is the strongest candidate” in a general election against Sen. Ted Cruz and Donald Trump, Sanders said, “I think some of these guys are going to be coming our way.”

Sanders concluded the taping with a soliloquy on “New York values,” pushing back against Sen. Ted Cruz’s claims about New Yorkers having a focus “on media and money”

“That’s right. It’s me, Bernie Brooklyn-born Sanders, and guess what, Ted cruz, I have New York values,” Sanders said. “I value a living wage for all Americans… I value a government that works for all of us not just Wall Street and special interests. Those are New York values.”

“When you say having New York values is bad thing, you insult my city, my state and my heritage,” Sanders said “I am the son of an immigrant and I am proud of it.” At the end of the skit, Sanders dropped the microphone.

Sanders is in New York campaigning ahead of the April 19 primary, where he is lagging in polls against former secretary of state Hillary Clinton. He has a rally planned in Washington Square Park shortly after the taping.

The episode of the Nightly Show will air on Comedy Central on Wednesday night at 11:30pm. 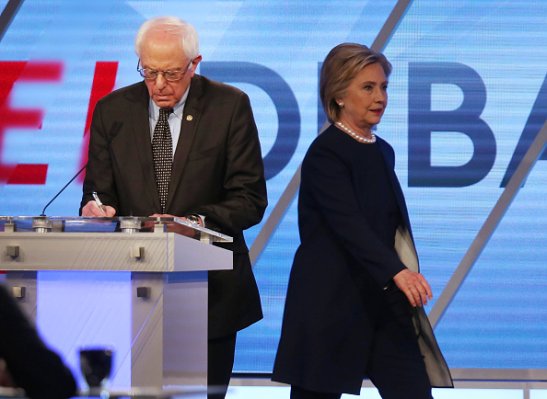 Bernie Sanders Faces a Trap at the Debate
Next Up: Editor's Pick