Why Bernie Sanders Faces a Trap at the Democratic Debate

In recent weeks, Bernie Sanders has taken a harsher tone with Hillary Clinton, calling her “unqualified” to be president, saying she’s too “ambitious” and going after her position on fracking, the Iraq war and Wall Street cronyism. An outside Sanders group even began posting the home addresses and contact information for superdelegates supporting Clinton in an attempt to swing them towards Sanders.

As Sanders’ path to the nomination has narrowed, his tone has become increasingly sharp. But as President Obama can testify, seeming disparaging towards a female opponent in a debate can be deadly. Remember “You’re likable enough, Hillary”?

Which means Thursday night’s debate could be a make-or-break moment for Sanders if his tone remains what it has been in recent weeks. “Assuming that Sanders actually believes that he has a chance to win the nomination, he certainly needs to draw contrasts,” says Stu Rothenberg, editor of the Rothenberg Political Report. “But those contrasts should be specific and detailed. Obviously, he should not look dismissive of her or mean-spirited.”

First, let’s take the unqualified remark. This was prompted by a report that folks in Clinton’s orbit were saying that Sanders wasn’t qualified to be president and Sanders shot back that Clinton was the unqualified one. The next day Sanders hastily retreated, saying of course he thinks Clinton is qualified, but he questions some of her choices such as raising money from Wall Street and voting to for the Iraq war.

Unfortunately for Sanders, there is a huge difference between “disqualifying” actions and being unqualified on the whole. The former is a criticism Republicans often use against Clinton as it avoids wholesale discounting her long and distinguished career. “Women’s qualifications have been questioned and undermined since Victoria Woodhull ran for President two centuries ago,” says Barbara Lee, head of the Barbara Lee Family Foundation, which helps women run for executive offices. “When it comes to women running for office, we have seen an evolution, but the reality remains that women are still held to a higher standard—especially when it comes to qualifications.”

Research from Lee’s foundation shows that women in particular face a “double bind” when running for office to prove “competence and likability.” Indeed, until 1945, Gallup asked whether respondents would vote for a woman “if she were qualified in every other respect”—implying that being female was disqualifying. Even today, an often-heard refrain on the campaign trail amongst voters is they’ll vote for a woman “if she’s qualified.”

“When women began running for Congress in the 1970s and 1980s studies showed they were more likely to face questions about their viability,” says Michele Swers, a Georgetown professor who has written two books on women in politics. “While Hillary Clinton has changed her campaign strategy from 2008 to 2016 downplaying her gender in 2008 and highlighting her status as a woman and potentially the first female president in 2016, one thing that has not changed is she is still running as the candidate of experience with a long resume displaying her qualifications.”

In other words, Sanders should be well aware by now of the history of the word “unqualified” if he chooses to use that attack.

The too “ambitious” hit also is fraught with implications for feminists. As New York magazine’s Rebecca Traister argues, it reduces Clinton to a Tracy Flick caricature of a female politician. And since when has too much ambition actually hurt the candidacy of any man running for president?

To be sure, Sanders and his team may be making this criticism unwittingly, but in running against a female candidate for the better part of a year they should know the fault lines by now. Especially since this year there is finally a critical mass of female journalists writing about the election to call them out on it. More than two dozen of the journalists covering Clinton’s campaign are women. And outlets like Vox and Monkey Cage have made a point to provide scholars on women in politics a platform to voice their opinions. There’s even a President Gender Watch co-founded by Lee and Rutgers University’s Center for American Women and Politics.

“I do think we are seeing some progress in the ways in which media—and even some candidates—are attentive to gender dynamics at play in this campaign,” says Rutgers’ Kelly Dittmar.

Echoes Jennifer Lawless, head of American University’s Center for Women and Politics: “It definitely represents progress that we’re now far more careful about the distinction between ‘disqualifying’ and ‘unqualified’ to describe Hillary Clinton’s background and experiences to be president. Given that she was a U.S. Senator and Secretary of State, her objective credentials are meatier than every man’s in the race. So describing her as ‘unqualified’ would certainly be unfair, especially relative to her competitors. It would also send the signal that it’s impossible for a woman ever to be ‘qualified.’ If she’s not, then who possibly is?”

With Clinton ahead in the pledged delegate count by 251, and overall by 689 delegates—not to mention the popular vote by more than 2.3 million votes—Sanders’ path is clearly narrowing. As he gets more negative, particularly in Thursday night’s debate, perhaps his last best shot at a knock out punch on a national stage, he must also be careful not to turn off female voters, who also happen to have swung every election since Ronald Reagan.

For all the boxes and traps being a woman has meant for Clinton, the challenge of going negative on a female candidate is also a tough one for male candidates looking to take on female rivals. 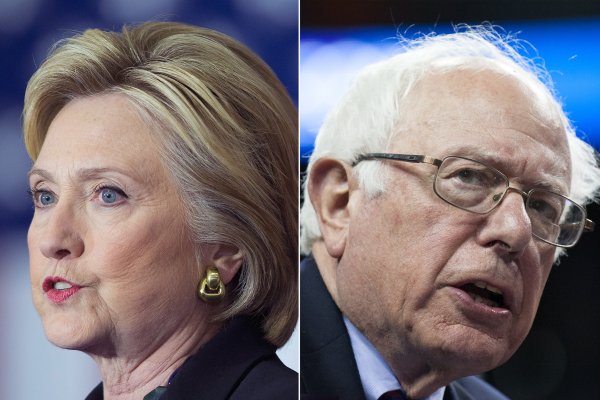 Tempers Flare Over Democratic Debate
Next Up: Editor's Pick