Why Republicans Are Looking Farther Down the Ballot

Corry Bliss knows a thing or two about tough races. National Republicans’ favorite political fixer was dispatched to Kansas to turn around that Senate race when it looked iffy in 2014, and this year he is running what could be the most expensive Senate race in the country: the re-election bid for Ohio’s Rob Portman.

From Portman’s campaign headquarters, Bliss oversees satellite operations in all 88 of Ohio’s counties, volunteer leaders on every college campus and a network of donors who are loyal to the White House veteran. Portman’s supporters have knocked on 1.3 million doors already, and the energy inside Portman’s offices in a suburban Columbus neighborhood feels like the election is eight days, not eight mothers, away.

It’s a by-the-books operation that might have to share space on the Ohio ballot with a billionaire businessman who has shown zero interest in those kinds of best practices: Donald J. Trump.

“Every race is a set of unique circumstances,” Bliss tells TIME, leaning across his desk, doing his best to diplomatic. Asked to contemplate a scene where his boss and Trump stand arm-in-arm at a campaign rally, Bliss deflects. “Our strategy won’t change. We’ve worked hard for over a year. We knew that if it’s a presidential year in Ohio, any race is going to be tough,” Bliss said. “We’re running our race. … Hoping to be dragged across the finish line is not a strategy.”

Regardless, Portman’s fate is unlikely to be tied to cash. He has the most donations banked of any Republican Senator, with almost million $13 million stashed away from donors who think down-ballot investments are smarter than throwing cash at a presidential nominee who gives donors little influence. (Only New York Democratic Sen. Chuck Schumer beats Portman in the campaign ATM race.)

Portman is hardly the only down-ballot candidate looking to stay independent of a messy, nationalized White House race. Party leaders are watching the Donald Trump-Ted Cruz fight drag the GOP into a mud-wrestling contest that could sully every race in the country. It’s why, almost a year ago, party leaders told candidate that it was fine—even encouraged—to keep the White House race at arm’s length. “You’re running for the U.S. Senate so focus on that,” party leaders wrote in a September memo to their incumbents. “Don’t get drawn into every Trump statement and every Trump dust-up. Keep the focus on your campaign and the voters back home.”

Yet that’s often easier said than done, especially when running against someone who understands how to capture the news cycle as well as Trump.

It’s also why, when you ask Republicans in Congress these days if they prefer Donald Trump or Ted Cruz, and there is a good chance they will answer with a third name: Haley Barbour. What does the former Republican National Committee chairman and power lobbyist who took a turn as Mississippi Governor have to do with the 2016 presidential election? Embattled Senators and Congressmen are holding him up as Example A of how they’d like to see the 2016 election go.

As RNC chief in 1996, Barbour bucked Bob Dole—ostensibly the head of the party as its White House nominee—and pulled funding from the presidential contest to funnel it to down-ballot races. Dole lost to Bill Clinton, but Republicans ended up gaining two seats in the Senate and maintaining a majority in the House.

More than a few senior Republicans, who see both Trump and Cruz as kryptonite in purple states with tough elections this year, would be delighted to settle for such an outcome again. “It’s more than O.K.,” said Tony Fratto, a top Treasury and White House aide to President George W. Bush. “No one is happy that Hillary Clinton is going to be President, but there are worse things.”

The current Republican Party chair Reince Priebus has told both Trump and Cruz that he will maintain personal control of the $126 million that donors have given him to spend as he sees fit. Conservative patrons and the outside groups they fund, meanwhile, are signaling that they have thrown in the towel on the presidential race and are looking at other races.

The network of groups backed by billionaires Charles and David Koch, for example, plans to spend about $889 million before Election Day, and roughly two-thirds of it will try to drive how voters cast their ballots. But neither Trump nor Cruz will see much of that cash. “We will not get involved in a presidential election that descends into mudslinging and personal attacks while ignoring the critical issues facing our nation,” says James Davis, a spokesman for the Koch brothers’ umbrella group. Instead, that cash is going to help Republicans like Portman; Freedom Partners Action Fund recently spent $2 million on a TV ad for him.

Portman is following national Republicans’ advice carefully, running a hyperlocal campaign without betting on the nominee’s coattails. Similarly, New Hampshire Republican Sen. Kelly Ayotte has been relentless in defending her state’s military bases and contractors; she says she won’t endorse in this GOP primary cycle and is likely to skip the convention in Cleveland altogether. Wisconsin Senator Ron Johnson would not even tell voters whom he supported before his state’s primary. Some members of Congress have even been scrambling to avoid getting named as convention delegates, while North Carolina Sen. Richard Burr plans to join Ayotte in skipping Cleveland to tend to his race back home.

Even Republican House Speaker Paul Ryan, long a white knight some hoped to emerge from a contested convention, has decided to focus on keeping his own House in order. “Let me be clear: I do not want, nor will I accept the nomination for our party,” Ryan told reporters on April 12, ahead of a trip to New York City to meet with some of the party’s most generous donors.

That leaves the GOP down on its luck. Polls show that Trump remains underwater with key constituencies in the general election, with 73% of female voters telling pollsters for CNN that they have a negative view of him. The same goes for Latinos (85%), African Americans (80%) and young voters (80%). These groups regard Cruz slightly better, although he still loses to Hillary Clinton in most head-to-head surveys.

As one Republican fundraiser described the dilemma for down-ballot Republicans: “Trump is the safer bet because they can run against him. ‘He’s not one of us, he’s not a Republican.’ You can’t distance yourself with Ted Cruz. He’s one of us.”

This dynamic has Democrats looking down ballot as well, with seven Senate Republican seats rated as either toss-ups or leaning Democratic, and at least 14 House GOP seats—about half the number Democrats would need to take the majority—are up for grabs.

“If the wave is huge and brings in all of the surfboards, we have the margins,” says a House Democratic strategist. “But it’s hard to predict the size of the November wave when we’re in April.” 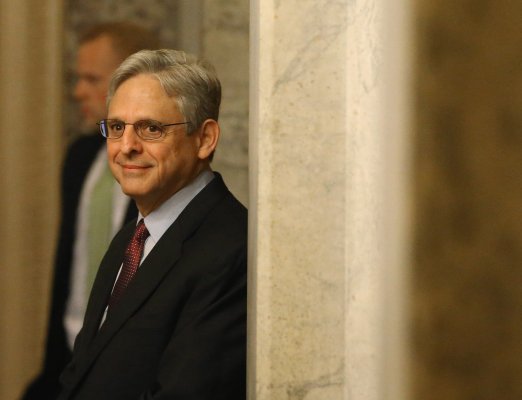 Senator Grassley and Supreme Court Nominee Merrick Garland Had a 'Pleasant' Breakfast
Next Up: Editor's Pick