“We came in saying, ‘Can we start with the 20?'” Greenberg, a History professor at Trinity College, recalled in a recent conversation with TIME.

It’s a question that’s been raised since before the announcement in June, thanks in large part to the conversation Barbara Ortiz Howard’s group, Women on 20s, started in its viral campaign aimed at banished the oft-maligned President Andrew Jackson from the bill. And it’s the same question that many are asking again in response to a recent TIME story about the new note.

The answer, quite frankly, is security. Though the Treasury Secretary ultimately signs off on the currency design, the Advanced Counterfeit Deterrence Steering Committee, or ACD, comprised of leaders from Treasury, the Secret Service and the Federal Reserve recommends notes for redesign. That decision is made with thwarting counterfeiting as the primary goal.

When the ACD recommended a change to the $10 bill, it was the denomination in which the rate per million— the number of counterfeit notes in circulation as reported by the Secret Service—was getting to a level that called for new technology. And because the $10 bill came first, the Treasury Department also saw the bill as its first opportunity to get a woman featured on U.S. currency, something Secretary Jack Lew has said is long overdue. Over the summer, the Secretary asked for public input on the selection process.

What TIME’s reporting and a slew of statements by the Treasury Secretary call into question, though, is whether or not the woman featured on the $10 bill will appear as the portrait. Treasury Department officials told TIME that the Secretary’s thinking has changed since the announcement in 2015, but did not specifically say how.

The $20 dollar bill will eventually be up for redesign and the Treasury Department could very well decide to feature a woman as the face of that bill. The Treasury Secretary has said over the past several months that they are looking beyond the $10 bill for changes. According to TIME reporting, the $20 note along with the $5 note, will be redesigned as a part of this new “family” of bills.

To maintain a consistent look and feel across the U.S. currency, when the government decides to redesign one note, it redesigns an entire series, also known as a family. The timeline for that roll out—which bill comes first, the $5 bill or the $20—will depend on security threats. And the federal government would typically attempt to release separate notes within 18-24 months of each other. On a basic level, that means a change is coming to the $20 bill, but it will not come before the $10 bill.

“We all pointed out that, really, the first person who should go is [President Andrew] Jackson,” Greenberg recalls. “But [Lew] gave lots of compelling reasons about why they had to start with the ten, including that was the first up for redesign.” 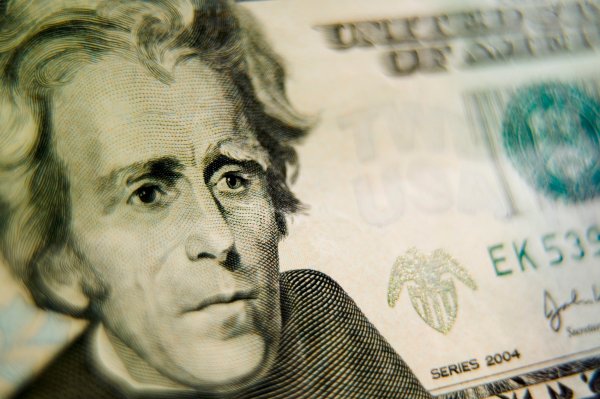