North Carolina Governor Pat McCrory probably never imagined that he’d be spending April managing the political fallout over Bruce Springsteen concerts. Yet that’s precisely what McCrory and other governors have been doing after several state legislatures passed bills criticized for eliminating protections for LGBT residents or potentially legalizing discrimination against them.

After blowback in North Carolina, where Springsteen canceled concerts to protest the new law and PayPal terminated a major expansion in the state, McCory issued an executive order meant to soften the blow on Tuesday. The following day, Louisiana Gov. John Bel Edwards signed an executive order extending protections for LGBT state employees and contractors. Advocates, who widely panned McCrory’s order as insufficient, continued to demand the law’s full repeal and put out estimates of the potential economic damage: more than half a billion dollars, according to the Center for American Progress.

Corporations were certainly involved in the fight for marriage equality, but their clout has come into sharp relief in the recent state-level battles over bills that affect LGBT people, particularly so-called “bathroom bills” and religious freedom laws. In the post-Obergefell era, arguments over economic impact have taken center stage. The list of things that businesses and cultural institutions have said might be put in jeopardy—or have outright taken away from states—over policies that affect the LGBT community is longer than ever. In recent months it has included major sports events like the Super Bowl, as well as film productions, lucrative conferences and hundreds of jobs.

“People who are going to swell the ranks of the tomorrow’s workforce and are entering the workforce now and also the people that are going to have buying power moving forward are largely embracing LGBT equality,” says Deena Fidas, who heads the workplace equality program at the Human Rights Campaign (HRC), a prominent LGBT rights group. And the more businesses and cultural institutions that speak out, the more pressure and permission there is for others to do the same.

This alliance between LGBT rights advocates and the business community is partly the result of work by groups like the HRC, which puts out an annual index ranking businesses on how inclusive their policies are. Fidas says that when the HRC started the index about 15 years ago, they were the ones reaching out to corporations. They made arguments that equality and diversity should be supported for their own sake. And they made business cases too. Being seen as tolerant, Fidas says, helps companies recruit and retain the best talent from the largest pools. There is also buying power at stake: LGBT consumers alone wield an estimated $884 billion. Now, Fidas says businesses are reaching out to the HRC and asking for advice on how to “catch up” and be seen as even more tolerant than the competition.

Employees have also demanded change from the inside. “We’re a company of 20,000 employees. We obviously have thousands of LGBTQ employees as well,” Salesforce CEO Marc Benioff recently told TIME. “And they expect us to take a position and advocate on their behalf.” Today more than half of Fortune 500 companies have internal policies protecting workers on the basis of sexual orientation and gender identity. And that means that when a state like North Carolina or Mississippi passes a bill that could be seen to undermine those protections, that can put corporations in a awkward position not just politically but logistically. If transgender people are banned from using the bathroom that aligns with their gender identity under state law but a company’s internal policy affirms that employee’s right do so, what do companies operating in that state enforce?

Momentum has also come from a change in consumer attitudes—particularly among millennials and Gen Zers. These days, businesses must make good products and have proven social-responsibility chops, which has become another way from them to compete. “Standing for something as a brand is much more important today,” says Georgetown marketing lecturer Rohit Bhargava. LGBT rights “was something that was sort of on fringes and it became totally mainstream,” he adds.

There is still risk for businesses or sports leagues to alienate people by coming out on the side of LGBT rights. But the likelihood is diminishing: a historic high of 60% of Americans now support same-sex marriage, according to Gallup. An even greater percentage support non-discrimination protections that cover sexual orientation and gender identity, just like federal law already protects sex and race. (No such law currently exists on the federal level or in most states, despite wide belief to the contrary.)

Critical as business groups have been in the fight over LGBT rights, activists say other factors remain important. The personal connection can be key to changing minds. In South Dakota, Gov. Dennis Daugaard met with transgender people from his state before vetoing a bill that would have controlled their bathroom use. “More and more people are coming to understand that we’re parts of communities, we’re parts of cities,” says Kris Hayashi, executive director of the Transgender Law Center and a transgender man.

And the prospect of losing federal funding can be a greater economic threat than private sector jobs. Some federal rulings have found that certain treatments of transgender people—such as banning them from the restroom that aligns with their gender identity, as the North Carolina law does—is a form of sex discrimination. And violating Title IX, which prohibits sex discrimination, comes with the risk of losing federal funds. The Obama Administration has said it is weighing whether the law might make North Carolina ineligible the $4.5 billion the state currently receives for K-12 schools, as well as other federal funds for things like highways and housing.

As the fights continue, some LGBT advocates say they’re no longer just awarding points for supportive words. “The statements that are coming out are parsed into two piles,” says Eliza Byard of GLSEN, which supports LGBT rights in schools. “There’s one for nice statements and another for actions taken.” 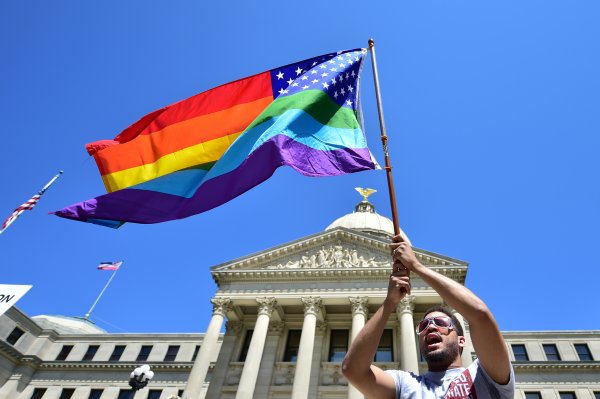 Transgender Advocates Fight Back With New Political Group
Next Up: Editor's Pick