Fragoso started his bid to become the world record holder with two other binge-watching professionals, according to Variety. However, only he had the perseverance to successfully watch all 94 hours, breaking the previous record set in March of this year by a group of Australians who watched 92 hours of television. Fragoso credited his “Mediterranean diet” and frequent stretching for his stamina in the TV marathon.

Fragoso watched a variety of shows over the course of his record-setting binge watch, including Game of Thrones, Curb Your Enthusiasm, Twilight Zone, Bob’s Burgers, Adventure Time, and, in a decision sure to entertain any Portlandia fans, Battlestar Galactica.

Fragoso’s attempt to set the world record was sponsored by CyberLink, in promotion for its PowerDVD 16 player. Because they couldn’t risk Fragoso injuring himself in his bid (don’t try this at home, kids!), according to Variety, they had a physician on-site to monitor the binge-watchers for any deleterious effects of prolonged TV watching and sleep deprivation. A judge for Guinness was also on hand to verify the record. The TV marathon started on Friday, April 8, passing the 94-hour mark on Tuesday just after 5 a.m. 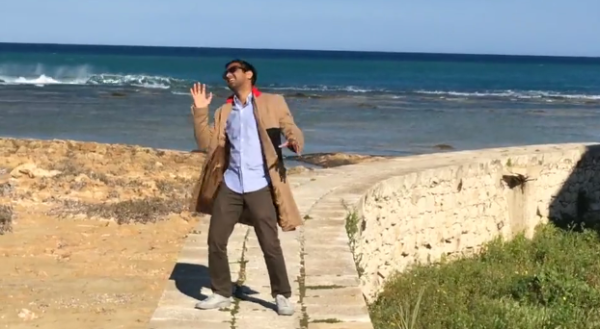 Aziz Ansari Made a Ridiculous Music Video for Kanye West's 'Famous'
Next Up: Editor's Pick