Here's Why the New Spider-Man Movie Is Called Homecoming

Next year’s Spider-Man reboot has an official title. Onstage at CinemaCon in Las Vegas, star Tom Holland announced that the sixth Spider-Man film will be called Spider-Man: Homecoming. It’s a reference to the high school event, but it also winks at how Spidey is returning to the Marvel Cinematic Universe as of next month’s Captain America: Civil War.

The notion of “Homecoming” also has some thematic resonance for the new, younger-than-ever Peter Parker. “Peter is trying to find his true identity and where he really belongs in this world,” Holland said.

Sony Pictures Chairman Tom Rothman joked, “I hope it takes him three movies!” (Except it’s probably not a joke, so let’s just go ahead and announce a new Spider-Man trilogy, also.)

Spider-Man: Homecoming arrives July 7, 2017. After announcing the title, Sony played a short teaser clip showing Robert Downey Jr.’s Tony Stark visiting Peter and his Aunt May in his Queens apartment. “It’s so hard for me to believe that she’s someone’s aunt,” Tony said about May – a reference to the fact that the Homecoming version of Aunt May, Marisa Tomei, is a couple of decades younger than Rosemary Harris was in the first Spider-Man film.

Sony also lightly teased the 2018 animated Spider-Man movie, declaring that it will “break new ground, not only for animated movies, but also for the superhero genre.” No official title for that movie yet, which is coming from Phil Lord and Chris Miller. In keeping with the high school theme, maybe Spider-Man: Regionals? Or Spider-Man: Algebra Class? 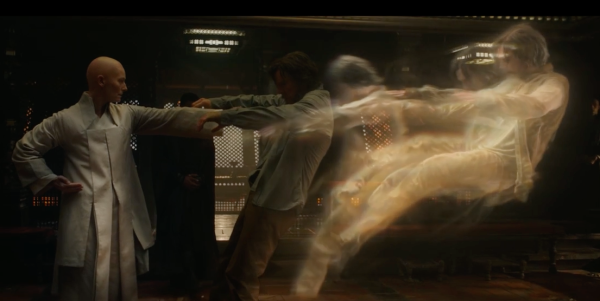 See The First Trailer For Doctor Strange
Next Up: Editor's Pick