Donald Trump is escalating his attacks against the Republican National Committee and its chairman, Reince Priebus, accusing the party of “rigging” the system against him. While Trump is correct that most in the party establishment are rooting for his rivals, his remarkable success thus far demonstrates how the GOP insiders’ efforts to prevent outsiders from taking over the process has failed. Rules changes designed to benefit well-funded and well-connected candidates—like the shift in Florida from a proportional to a winner-take-all race—have only benefited Trump. And the party’s rules have been set since well before Trump’s candidacy was taken seriously. Instead, Trump’s lack of follow-through on delegates has allowed his rivals to exploit the very scenario the RNC sought to avoid—using the tactics of outsider candidates like Ron Paul— with its post-2012 rules changes: a protracted delegate-by-delegate battle.

Speaker of the House Paul Ryan delivered a Shermanesque statement Tuesday that he would not seek the GOP nomination. The future Republican convention chairman, Ryan’s odds of becoming the nominee are the same today as they were yesterday—exceptionally unlikely. Should the convention deadlock on multiple ballots, Ryan could be called on to save the day no matter how much he denies he’s interested. But that’s almost certain not to happen, as Ryan has called on the party to seek a white knight, should one be needed, from among the 17 candidates that ran this cycle. Feel the Gilmore-mentum.

Bernie Sanders has decried the influence of big money in politics, using rival Hillary Clinton‘s fundraisers and ties to Wall Street as a frequent cudgel. But Sanders, in the unlikely event that he wins the nomination, would benefit from those same donations, as Clinton has been raising money for the party, which itself has reversed an Obama-era ban on lobbyist funding and corporate donations to its convention in Philadelphia. Sanders’ campaign didn’t reply to repeated inquiries from TIME over whether the candidate would call on those funds to be returned—or even their solicitation halted.

Clinton blames the New York City Mayor for a racially-charged joke. Trump faces fire over 9/11 recovery funding. And a dive into the Clinton library’s Trump files.

In Kasich’s Call for Governing Experience, Some Hear Another Gasp of Old GOP
Ohio governor struggles to sell experience and know-how in the season of the outsider [Washington Post]

“I do not want, nor will I accept the Republican nomination.” — Speaker of the House Paul Ryan ruling out a presidential run Tuesday

“I know the rules very well, but I know that it’s stacked against me by the Establishment. I fully understand it. We had people out there, and they weren’t heard.” — Donald Trump in a CNN town hall Tuesday night 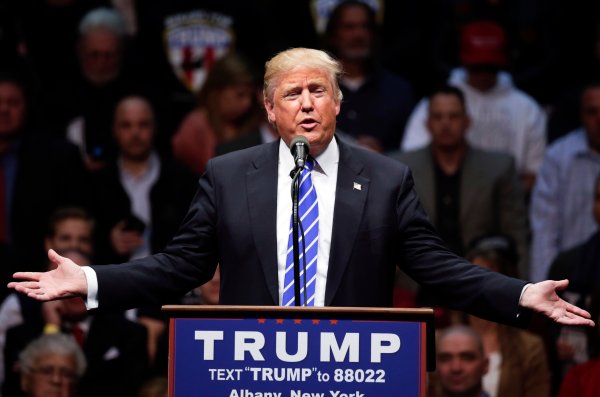