Four Australians working for the country’s version of the’ 60 Minutes news program could face up to 20 years in prison if found guilty of taking part in an alleged kidnapping. The charges have arisen in connection with an Australian mother’s botched attempt to take back her children from her Lebanese ex-husband.

Lebanon’s National News Agency said Tuesday a judge had charged both Australians and Lebanese after the two children were snatched from their paternal grandmother last week. “Suspects were also charged over interfering and participating in the crime, and referred to the Primary Investigating Judge,” the report said.

The BBC said reporter Tara Brown, her producer, camera man and sound recordist are among the accused. Also charged are the children’s mother, Sally Faulkner, two Lebanese men and two British employees of a company specializing in the recovery of children in cases of disputed custody.

The crew for Channel Nine’s 60 Minutes had been following Faulkner’s custody dispute with ex-husband Ali al-Amin, whom she accuses of taking the children to Lebanon without her permission.

Lebanese authorities have returned the two children to al-Amin.

It has been claimed that grandmother Lahela al-Amin was assaulted during the alleged abduction, which would mean more serious charges. The Guardian reported that the charges included “armed abduction, purveying threats and physical harm,” which carry sentences of between seven and 20 years. 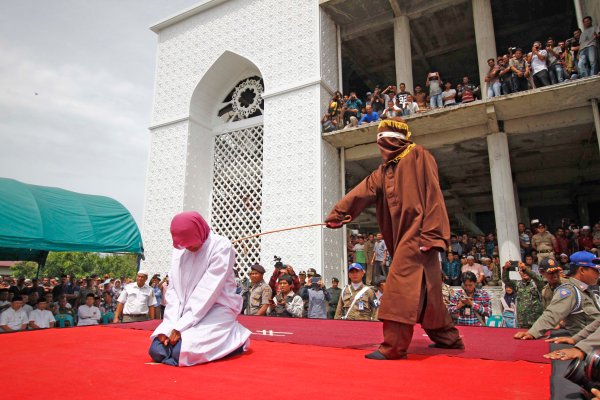 Indonesia: Non-Muslim Punished With Shari‘a Law in Legal First
Next Up: Editor's Pick