It’s been two years since Boko Haram kidnapped 276 Nigerian schoolgirls from their school in Chibok, and 219 of those girls are still missing. Many are thought to have been sold into sexual servitude or forced marriage, while others may be used as human shields for the Boko Haram extremists hiding out in the Sambisa forest. Few hold out hope that the girls will be returned to their families.

But the world hasn’t forgotten about them, and two former TIME 100 honorees have joined forces to remind the world that the girls are still missing. Pardis Sabeti and Oby Ezekwesili have collaborated on a song, called “Around the World,” to raise awareness about the tragedy.
soundFile=https://time.com/wp-content/uploads/2016/04/01_around-the-world.mp3|
startPosition=0|
endPosition=203000|
content=Click Here to Listen to Around the World

Sabeti, the Harvard researcher who identified the point of infection that started the 2014 Ebola outbreak, had known about the plight of the Chibok girls before she attended the Time 100 gala last year. But when she heard a speech at the event by fellow honoree and #BringBackOurGirls founder Ezekwesili, she decided she had to do something to help.

“How can we celebrate when these girls are missing?” Sabeti remembers thinking. “We’re pretending that they never existed, but they do exist.” Ezekwesili’s speech went viral, eventually fading from the news, but it stuck with Sabeti. “A little piece of us is eroded when this can happen on this earth,” she said.

Sabeti knew that the Chibok tragedy was something she couldn’t fix with science or research. But she felt like it was something she could address through music. Sabeti is in band called Thousand Days, and music is an important part of her daily life. She and her lab colleagues often sing together to help relieve stress and remind themselves of the human component of their work, and she’s been working on an album with some of her Nigerian co-workers. One of them had given her an instrumental piece, but there weren’t words attached. When she read it, she said, “I knew what this song was written for, it was written for this speech.”

For Ezekwesili, it was gratifying to see the #BringBackOurGirls message continue to resonate. She says the song will spread the message to girls around the world that “if they go to school, the world will be on the lookout for them. If anything should happen to them, we will have their back.”

Sabeti says “Around the World” is a new way for her to change the world. “My scientific work is much more practically minded— to change something, to effect something,” she said. “And the music I do is much more soft power, about changing minds.”

She says it’s important to rescue the Chibok girls, because to allow this tragedy to continue would be “a spoiler for the entire global campaign to get girls to learn.” The push towards girls education has been championed by First Lady Michelle Obama, the United Nations, and almost every human rights group.

“We can’t afford to move on, when the girls have not been brought back,” Ezekwesili says. “We need to see how we can have many more Malalas in the world.” 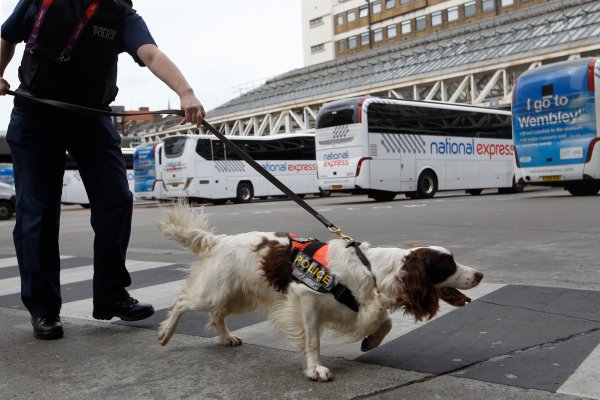 Airport Drug Sniffing Dogs Find Lots of Sausage But No Drugs
Next Up: Editor's Pick