On Equal Pay Day, one year after she announced she was running for president and one week before the crucial New York primary, Hillary Clinton called for stricter transparency laws to ensure women and men are paid equally for the same jobs. She recalled a young girl in Las Vegas who asked her, “if you’re elected the girl president, will you be paid the same as the boy president?”

At an event Tuesday in New York City hosted by Glassdoor, a jobs and recruiting site, Clinton called the stubborn wage gap an issue that affects the “broader economy,” noting that “last time I checked, there’s no discount for being a woman. Groceries don’t cost us less.”

Clinton also reiterated that while women broadly make around 76 cents for every dollar that a man makes, women of color are often disproportionately affected by the wage gap: black women make only around 60 cents, and Latina women get only 55 cents for every dollar made by a white man. And women are over-represented in service industries, she noted, which often make less than minimum wage because of the tipped-wage model.

“You can be paid far less than the minimum wage if you’re a waitress, a bartender, you work in a hair salon — you can be paid as little as $2 an hour,” she said. “That puts so many women in a powerless position, they can’t stand up for themselves, they can’t speak out, because they’re dependent on the goodwill of their customers and managers.” Two-thirds of tipped-wage workers are women.

Glassdoor just released a new analysis of that data that confirmed the dire statistics we all know about women and pay: on average, women make about 76 cents for every dollar a man makes. But the Glassdoor report didn’t just put men and women’s salary averages side by side, like many other reports do — they actually compared data from employees working in the same company, at the same job, from their database of hundreds of thousands of users who report data about their employers, occupations, and salaries on the site.

After comparing more than 500,000 full-time salaries of U.S. employees, Glassdoor found that men made about 24% more than women on average. But when controlling for age, education, and experience, that gap shrinks to around 19%. When comparing workers in the exact same job, company, and location, that gap shrinks to just over 5%. But that last 5% can’t be explained by differences in age, occupation, or experience, the report says– which means it’s likely the result of implicit bias.

Clinton also addressed the fact that the pay gap becomes more pronounced with age, as men are increasingly promoted and given raises while women are often left behind (the Glassdoor report found that workers under 24 faced only a 2% adjusted wage gap, while workers over 55 saw more than a 10% gap, when adjusted for occupation.) She said this might be surprising to young women, who enter the workforce on roughly equal footing with men. “You have more pay parity in today’s world when you start to work, which is why so many young women don’t see this as a problem, because they’re getting equal pay,” she said. “But then when you get up in years, you find out it’s not true anymore. Why? What happened? I’m still the same person, I work just as hard.”

Some polls suggest that this relative optimim of younger women might cause a problem for Hillary at the polls. Younger women who report less discrimination at work tend to support Clinton in lower numbers than older women who say sexism has interfered with their careers.

In urging the passage of the Paycheck Fairness Act so that workers who discuss their pay can’t be fired or retaliated against for learning about their co-workers’ salaries, Clinton said equal pay was just one part of her larger agenda of economic equality for women workers, including paid leave and access to quality, affordable childcare.

“If talking about equal pay and paid leave and more opportunities for women and girls is playing the gender card, then deal me in,” she said. 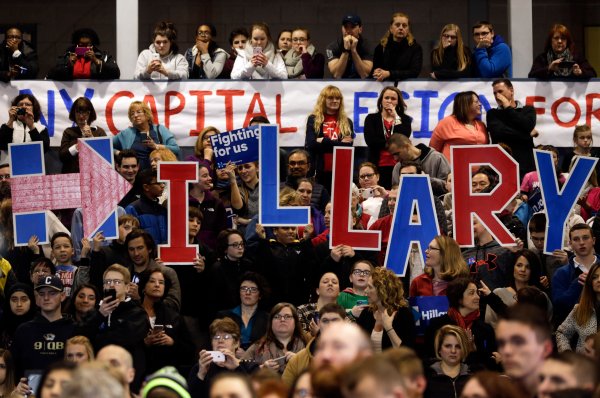 Young Clinton Supporters Fight Back
Next Up: Editor's Pick