Brazilian President Prepares For Her Next Impeachment Battle

Brazilian president Dilma Rousseff was fighting Tuesday for the votes to prevent her being impeached ahead of a crucial vote in congress expected as soon as Sunday.

Police in Brasilia have built a six-foot barricade outside congress to separate the anticipated hundreds of thousands of pro and anti impeachment demonstrators before the vote by the full lower house of congress.

On Monday night, a key congressional committee voted to recommend that impeachment proceedings against Rousseff continue. Lawmakers voted against Rousseff, who is charged with using state bank funds to mask a budget shortfall, 38 to 27, amid furious scenes, with politicians shouting over one another and waving opposing placards.

The process will now proceed to a vote by the full lower house, where the opposition will require 342 of the 513 lawmakers for it to pass to the senate. As of Tuesday, 299 were in favor, with another 99 either undecided or declining to reply, according to an extensive survey by the O Estado de S.Paulo newspaper.

But there were also signs that the momentum had turned in the president’s favor after a bruising few months. A poll showed support for impeachment dropped seven points to 61%, with a similar number also supporting the ouster of the man who would replace her, vice-president Michel Temer.

“The government knows that their best chance of blocking impeachment is in the vote in the lower house,” says Juliano Griebeler, of the Barral M Jorge political consultancy in Brasilia. “At the moment that looks possible, but there could yet be further political shocks, such as another round of arrests in Operation Car Wash.”

Rousseff’s Workers’ Party government has been severely damaged by Operation Car Wash, in which a federal judge is investigating $3 billion in bribes paid by state oil giant Petrobras. Scores of politicians, many from Rousseff’s party, are said to have benefited, and funds are said to have been siphoned to her 2014 reelection campaign. Her predecessor Luiz Inácio Lula da Silva was detained for questioning by federal police last month. The political paralysis has worsened the worst recession in three decades and deep public anger at the entire political class has seen more than a million people on the streets.

Ironically, it may be the universality of that ire that hands Rousseff a lifeline, with few in Brazil enthusiastic about handing power to the Brazilian Democratic Movement Party (PMDB), her former coalition partner that is also entangled in scandal. If Rousseff were to be impeached, she would be replaced by Temer of the PMDB, who yesterday released an audio tape of a speech apparently prepared for that eventuality, talking of the need for a “government of national salvation.”

But it is unclear if Temer himself could provide that, with general election polls showing him registering support of two percent. Last week, a Supreme Court judge ordered the opening of impeachment proceedings against Temer for breaking the same fiscal rules as Rousseff. If he too were suspended from office, Eduardo Cunha, the speaker of the lower house who is leading efforts to impeach Rousseff and is also a member of the PMDB, would assume the presidency. But he is facing money laundering charges over allegations that he was paid $5 million in bribes in the Petrobras scandal and stashed the cash in offshore bank accounts.

After the defection of the PMDB from her coalition left her vulnerable, Rousseff has been scrambling to gather the one-third of votes in the lower house that she needs to defeat the impeachment motion. Lula, the former president, has been working as an informal advisor to Rousseff after his appointment as her chief of staff was blocked by the Supreme Court and the pair have offered ministerial jobs to smaller parties in exchange for their support, Brazilian media reported.

On Monday night, in Rio de Janeiro, tens thousands of government supporters turned out for a rally with musicians and intellectuals in which Lula angrily denounced their opponents. “The special commission was mounted by Cunha,” he said. “It is his team. Our fight will be in the chamber. On Sunday we will have clarity.”

In Brasilia, pro and anti impeachment supporters have already made camps along the city’s main esplanade, at the head of which sits congress, the presidential palace and the supreme court, in anticipation of a decisive week.

If the house passes the motion, and the supreme court does not block it, Rousseff will be removed from office for 180 days while the senate investigates. A committee would write an indictment, which would then need to be endorsed by two-thirds of the full senate, which observers believe would likely happen. If it does, Rousseff would lose the presidency and be banned from public office for eight years. 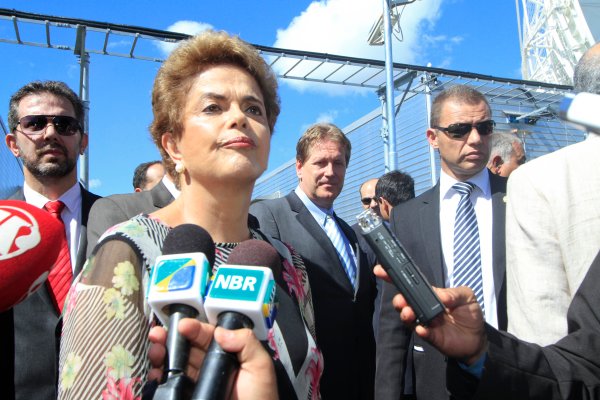