When Daveed Diggs walks down the street in New York City these days, he often gets recognized as someone very particular: Thomas Jefferson. The actor and rap artist plays the founding father—as well as the Marquis de Lafayette—in Broadway’s record-shattering Hamilton, eight times a week. As a result, he says, fans often think of him as if he were Jefferson’s modern-day persona.

“I think people understand I’m not actually the real Thomas Jefferson,” he tells TIME, with a laugh, but Jefferson is still a complicated person with whom to be associated. Diggs grew up in California, son of a white, Jewish mother and an African-American father. Meanwhile, Jefferson was a Virginian elite who was one of the most important men in the shaping of the United States but who also owned slaves—who, most historians now agree, included some of his own children. (The song “What’d I Miss” contains a brief reference to this history: the “Sally” whom Jefferson asks to open a letter for him would have been Sally Hemings.)

Doing justice to both sides of Jefferson’s legacy, while also creating a contemporary character out of one of the most famous men in American history, was just one of the reasons why it was helpful to have historian Ron Chernow—whose biography of Alexander Hamilton is the show’s source material—on stand-by. “We had Ron in the room most of the time, which was incredible,” Diggs says. “We’d be like, ‘So, if I do this thing with the character does that ruin history or is it, like, a fair adaptation?’”

But director Thomas Kail also told the cast, Diggs says, not to make their character interpretations into a book report. “We were to use what was useful in terms of telling this version of the story,” he says, “and the way that we made [Jefferson] function in the show is to make him incredibly charismatic.”

Read more: What We’re Still Getting Wrong about Thomas Jefferson

Diggs’ version of Jefferson is more than just charismatic—he’s flamboyant and funny and, as TIME’s review put it “a scheming dandy.”

“History is about who tells it, and I feel like I’ve been given this opportunity to like, re-imagine and retell the story,” Diggs says. It’s not lost on him that he’s making the audience fall in love with a guy who, in his words, “is really pretty sh—ty.”

Still, he says, the end result is worth it if it inspires viewers to think twice about what they learned in school: “I think it’s cool that the association of all of us in this particular production with these characters gives audiences a reason to learn more about them.” 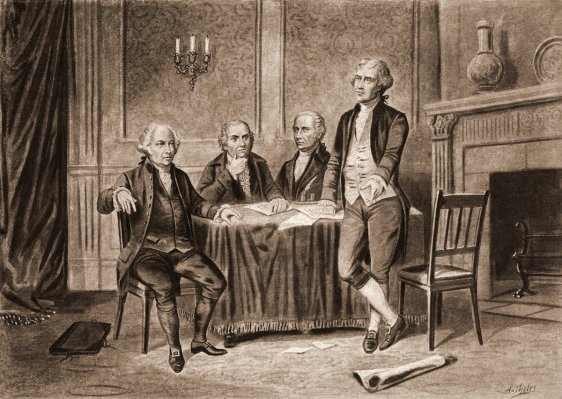 How the Rivalry Between Thomas Jefferson and Alexander Hamilton Changed History
Next Up: Editor's Pick