Bernie Sanders touted the alignment of his policies with the ideas of Pope Francis on Saturday, praising the leader of the Catholic church and denouncing economic inequality, as he prepares to visit the Vatican next week.

“I must tell you that I am a very great fan of the role that Pope Francis has been playing in talking about inequality in this world,” Sanders said during a campaign stop in New York City on Saturday, the Washington Post reported. “He has been out there talking about the need for a moral economy . . . an economy in which we have a moral responsibility to pay attention to what he calls ‘the dispossessed.’”

The Vermont Senator, who is Jewish, announced Friday that he will attend a conference on income inequality at the Vatican next week, days before the high-stakes New York primary. In an interview announcing his visit, Sanders expressed his admiration for the popular Pope, commending Francis for addressing the need for morality within the global economy.

It is not clear whether Sanders will meet with Pope Francis during the visit.

Sanders has previously praised the Pope, whose social and and economic beliefs align with many of Sanders’ political opinions. In a September interview with Canadian Catholic network Salt and Light that aired in February, Sanders called Francis a socialist and said he has “in a very bold way” raised the issue of the “idolatry of money” and advocated for people who have been pushed aside by society.

Democratic candidate Hillary Clinton, who is a Methodist, has also said she admires the Pope, and she praised his leadership of the Catholic church. Ahead of Francis’s visit to the U.S. last year, she said the world needs more “leaders of conscience, particularly leaders of faith, who say what they believe in their heart.” 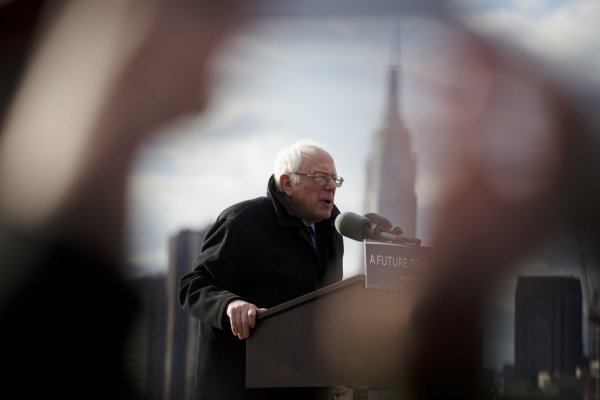 Sanders Hopes to Cut Clinton's Delegate Lead in Wyoming
Next Up: Editor's Pick