With the first battles of insurrection waged that April 24 and the General Post Office (GPO) in downtown Dublin now occupied by rebel forces, P. H. Pearse stood under the portico of the GPO to tell passersby—and the world—the reasons for the earlier gunfire and combat. Reading a formal proclamation declaring “The Provisional Government of the Irish Republic,” Pearse, the president of the just-named Republic, used present-tense verbs and bold language to make his case: “Ireland, through us, summons her children to her flag and strikes for her freedom.” The second sentence he read that Easter Monday in 1916 notes that his kindred fighters, assembled from members of the Irish Republican Brotherhood, the Irish Volunteers, and the Irish Citizen Army, were “supported by her exiled children in America” and, somewhat more vaguely, “by gallant allies in Europe.”

In the Proclamation, Ireland’s “children” and the “exiled children in America” join forces as the Easter Rising begins. Aside from “the Irish nation,” America is the only other country he specifically names. Great Britain, the ancient enemy of an independent Ireland, is dismissed as “an alien government” and “a foreign people and government” without more explicit identification.

For Pearse and his followers, the journey to the GPO on April 24 depended on plotting and planning that had taken place in both Ireland and America over the course of several years. In the United States, John Devoy saw the Rising as his life’s crowning achievement. Born in 1842 in County Kildare, Devoy was exiled by the British government to America in 1871. A member of the secretive Irish Republican Brotherhood (IRB) before he was twenty, he worked to recruit to the Republican side Irish soldiers serving in the British army, and in 1865 he helped IRB founder James Stephens escape from prison—before being arrested himself on February 22, 1866. At his trial a year later, he pleaded guilty to the charge of treason felony and was sentenced to imprisonment of fifteen years at hard labor. After nearly five years of incarceration, including the pre-trial period, he received amnesty, banishing him from the territory of Great Britain until the end of his sentence.

In the opinion of one commentator, Devoy kept himself on a war footing for over half a century, and his wait wasn’t in vain. As much as anyone, he embodied the American “exile” referred to in the Proclamation. Although Devoy became a naturalized U.S. citizen in 1883, for nearly six decades in his adopted country he never stopped dreaming about independence for Ireland. He headed up Clan na Gael (the American counterpart to the IRB and also a secret organization); raised money for republicanism (contributions from the United States proved critical in financing the Rising); and engaged in journalism (besides working on newspapers in New York and Chicago, he launched the Irish Nation in 1880 and The Gaelic American, a weekly newspaper based in New York City and foursquare republican in its viewpoint, in 1903). In short, Devoy kept freedom for Ireland the animating principle of his life. For the Rising, and though three thousand miles away, he was simultaneously planner, paymaster, and propagandist.

While Devoy played different yet intersecting roles, he also balanced his approach. The ideologue was also a pragmatist. The consummate insider who whispered conspiratorial schemes to other Clan members was also a well-known journalist and public speaker. The proud Irishman was an equally staunch defender of American ideals. Historical assessments of Devoy often compare him to Lenin for what he contributed to the cause of Irish independence, and someone once observed that “only the pen of Balzac could do him justice.” Just five feet six and solidly built like a fighter, his thick beard complemented his intense gaze.

Devoy built on a foundation earlier exiles and immigrants had established. Particularly during the famine years (1845–1852) and their aftermath, the numbers of the American Irish community swelled with remarkable speed. According to statistics compiled by the Commission on Emigration and Other Population Problems in Dublin, 740,216 Irish emigrants departed for America between 1851 and 1855, with a total of 989,834 through 1861. During the next decade (1861–1870), another 690,845 followed. In the seventy-year period between 1851 and 1921, some 3,794,852 people left Ireland for the United States—out of a total of 4,514,017 who emigrated from there. Counting second-generation Irish in America, more Irishmen and -women resided in the United States by 1900 than lived in Ireland.

Many arrived carrying little more than a grudge for the British. For some, the great hunger produced even greater hatred—and a longing to see their native land as a miniature America, independent and free from England. In 848, Henry Grattan Jr., a member of the House of Commons from County Meath, told a session of Parliament at Westminster about a conversation he had the year before at an Irish seaport with a man preparing to sail to the United States. In Grattan’s telling, “I advised him to remain at home. ‘No, Sir,’ said he, ‘I will go to the Land of Liberty.’ ‘But consider your sons’ was my reply. ‘Oh! They will come back,’ was the response, ‘and when they do come back it will be with rifles on their shoulders.’ ” 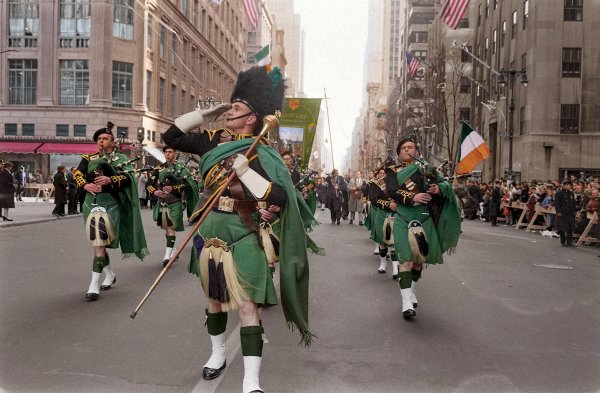 Celebrate St. Patrick's Day With Colorized Photos of Irish Americans in the 1960s
Next Up: Editor's Pick