The First Migrants Deported Back to Turkey Under an E.U. Deal Face an Uncertain Future

A police officer escorts a migrant from a Turkish ferry, carrying the second group of migrants deported from Europe to the port of Dikili district, Turkey, April 8, 2016.
Ozan Kose—AFP/Getty Images
By Jared Malsin/Dikili, Turkey

The men stepping off the boat carried few belongings: a backpack, a blanket, a light jacket. Escorted by uniformed officials, they walked one by one down a gangplank lined on both sides by police officers, into the control of the Turkish immigration authorities.

They were among 45 Pakistani men sent by boat to Turkey from Greece on Friday morning, making them some of the first people deported under a Turkish-European agreement intended to halt the historic wave of migrants seeking to enter Europe by sea. A reported 124 people were scheduled to be deported on Friday from Greek islands under the agreement, which calls for migrants arriving in Greece via the informal sea route to be returned to Turkey. After surviving the potentially lethal crossing from Turkey to Greece across the Aegean Sea—a journey that took the lives of hundreds of migrants last year—all of them are now back in Turkey.

Under the arrangement completed on March 20, European and Greek authorities plan to deport migrants arriving by sea to Greece, sending them back to Turkey. In exchange, Turkey received a promise of eventual visa-free travel for its citizens in Europe, and billions of dollars in funds were pledged to help Turkey deal with the refugee crisis. Refugees in Greece awaiting evaluation of their claims to political asylum are exempted from deportation. The deal also stipulates that some Syrian refugees will be permitted to fly to Europe from Turkey. In theory, the deal is one-to-one: one refugee enters Europe for every one that is sent home.

The European Commission says the arrangement is designed to end what it calls “irregular migration,” and replace it with formal routes into Europe. More than a million people entered Europe by such irregular means last year, including more than 800,000 who made the perilous journey by sea to Greece, according to the International Organization for Migration.

Read More: The Messages That Hold Refugee Families Together

But critics say the new arrangement abdicates Europe’s responsibility under international law to assist people currently fleeing war, political strife and economic deprivation. In addition, human rights groups say the deal has created more chaos in Greek refugee camps, and exposes deportees to dangerous conditions in Turkey, where authorities are sending Syrian refugees back into the warzone in Syria, according to Amnesty International.

It also remains to be seen whether all the provisions of the deal will be implemented. In a speech on Thursday, Erdogan threatened to withdraw from the agreement if Europe did not uphold its end of the bargain. “If the European Union does not take the necessary steps, then Turkey will not implement the agreement,” he said.

The Pakistani deportees arrived on Friday morning aboard a 98-foot Turkish-flagged ferry called the Lesvos after departing the Greek island of the same name. After the ship docked in the small Turkish town of Dikili, officials, some wearing surgical masks, escorted each migrant onto the docks, where they were processed individually before being sent onto waiting busses. The majority of the Pakistanis appeared to be young men no older than their twenties. Journalists were barred from entering a cordoned area around the docks and were unable to speak to the deportees or the officials on site.

Under a measure passed by the Turkish parliament on Thursday night, the Pakistani citizens—who are considered economic migrants, rather than political refugees fleeing war—are expected to be detained and then deported to Pakistan. Hours after the first boat arrived, a second vessel, the Nazli Jale, docked at the port in Dikili, unloading another 79 migrants, including people from Iraq, Egypt and Afghanistan. The first person to disembark the second ship appeared to be a woman in a wheelchair.

The two ships that landed at Dikili on Friday were the first to arrive since deportations began on Monday, when three ships carrying an estimated 200 people, also Pakistani citizens, returned from Greece. In the interim, there is growing evidence that the migration deal is failing so far in its aim to deter people from attempting the sea crossing to Europe. According to Greek authorities cited by Reuters on Friday, 149 migrants arrived by sea on three separate islands in just 24 hours. The previous day, another 76 arrived. But the deal does seem to be working for the European countries who were looking to reduce the flow of migrants—Germany, which has taken in the most migrants, has seen a huge drop in refugee applications.

Overwhelmed Greek authorities say they have nowhere near enough staff to implement the E.U. deal, and officials have already made critical mistakes in processing the deportees. On Monday, 13 asylum seekers were accidentally deported to Turkey, although they are supposed to be excluded from the deal. The E.U. had previously vowed to allow those who apply for political asylum to stay in Greece until their applications are evaluated. That places formal asylum seekers in a separate category from the rest of the thousands of refugees arriving in Greece, although their reasons for migrating—including war and civil strife—may be the same. According to a UN official quoted by the Guardian, Greek police “forgot” to process their asylum applications.

Amnesty International said on Thursday that thousands of refugees in detention centers in Greece are being held in “appalling conditions.” The group said migrants, automatically detained by Greek authorities, are packed into tight quarters in containers, with not enough blankets to go around. The detainees include pregnant women, young children and infants. On April 1, Amnesty also reported that Turkey is “rounding up and expelling” large groups of Syrian refugees, sending them back to their war-torn country. The group said the findings exposed critical flaws in refugee policy in Turkey, the country Europe is now relying on to handle the a new wave of people expelled from Greece. “In their desperation to seal their borders, EU leaders have willfully ignored the simplest of facts: Turkey is not a safe country for Syrian refugees and is getting less safe by the day,” said John Dalhuisen, Amnesty’s director for Europe and Central Asia in a statement.

Turkish officials deny the allegations that Syrian refugees were rounded up and returned to Syria. 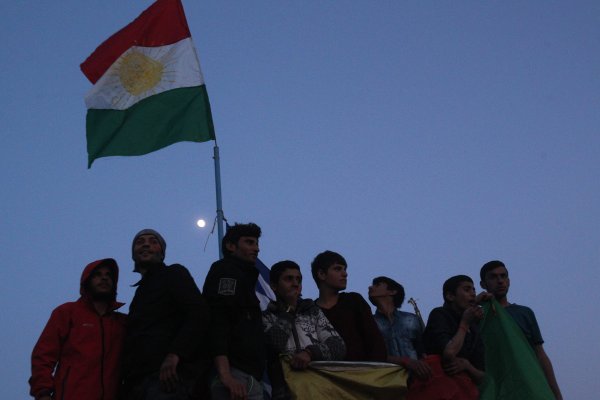 Meet the Iraqi Refugees Who Are Going Back to Iraq
Next Up: Editor's Pick