President Bill Clinton engaged repeatedly with Black Lives Matter protesters who interrupted a rally in Philadelphia on Thursday in a series of tense confrontations, defending his own and his wife Hillary’s positions in the 1990s.

The protestors challenged Clinton throughout his speech on the policies of his presidency, including the crime bill of 1994 and the welfare reform legislation of 1996, both of which are reviled by the Black Lives Matter movement.

They held provocative signs, including “Hillary is a murderer,” which a woman said she meant in reference to the death of Libyan dictator Muammar Gaddafi, according to MSNBC, who Clinton advocated overthrowing.

Clinton forcefully stood by his record. “If you think it was bad in the 1990s, if you think record increases in income and record low unemployment, record decreases in poverty, record small businesses forming, you better go with them,” Clinton said of the Black Lives Matter protesters, “otherwise you better elect Hillary president.”

At one particularly fervent moment, protesters seemed to chant against Hillary for her comments twenty years ago in 1996 when she called criminals “not just gang of kids anymore,” but “super-predators.”

Bill argued back, suggesting Hillary’s comments had been taken out of context. “I don’t know how you would characterize the gang leaders that got 13-year-old kids hopped up on crack, and sent them out onto the street to murder other African-American children,” Clinton said hoarsely. “Maybe you thought they were good citizens: she didn’t.”

“All I know I this election is about the future,” Clinton continued. “They’re trying to blame her for something she didn’t do.”

Black Lives Matter protesters have interrupted numerous Democratic candidates’ events this year, first derailing Vermont Sen. Bernie Sanders and former Maryland Gov. Martin O’Malley at the liberal Netroots conference in Phoenix in July, and even taking control of the microphone at a Sanders event in Seattle last year. Hillary Clinton has been heckled at several events, including a rally in Atlanta and a private fundraiser in South Carolina.

The protesters have sought to make an imprint on the race, holding candidates to account and publicizing their views on criminal justice reform. They have met privately with both Sanders and Clinton and helped shape their platforms.

Bill Clinton on Thursday defended some aspects of the crime bill such as the assault weapons ban and funding to expand police forces. He said that along with the Brady Bill, it helped reduce crime rates, though he said he was not in favor of the increase in sentencing. “We a had a 46-year low in the deaths of people by gun violence and who do you think those lives were that mattered? Whose lives were saved, that mattered?” 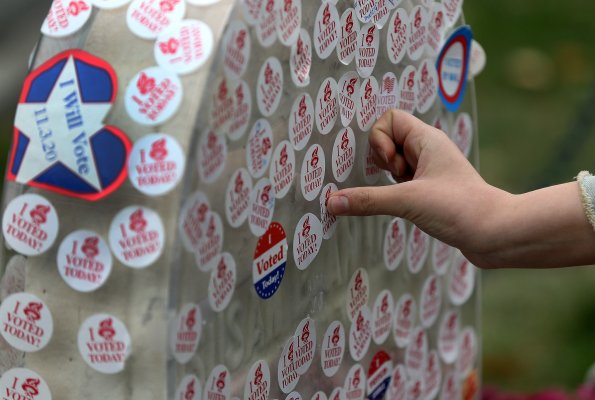 The 2020 Election Was a Breakthrough Moment For Young Voters
Next Up: Editor's Pick