Why the New iPad Pro Could Be Your Next Camera

By Olivier Laurent and Callaghan O'Hare

When the first iPad came out in April 2010, it didn’t even have a camera. At the time, the device was marketed as the first in a new category that fell between a conventional laptop computer and an iPhone.

It was only in 2011 that Apple added a 0.7 megapixel camera to the iPad 2. The number of pixels has gradually increased over the years, but the iPad has remained relatively low-tech as far as cameras go. Still, that hasn’t prevented people from using their iPads as one. In New York City, you can see them everywhere: from the statue of liberty to Times Square, or at concerts. Often, they are surrounded by people chuckling. Tumblr accounts have been created to mock them, and articles warn that Friends Don’t Let Friends Take Photos With an iPad.

But is this about to change?

Apple’s new 9.7-inch iPad Pro now sports the same advanced camera system as the iPhone 6S. Featuring 12 megapixels, a fast f/2.2 aperture lens, and the powerful A9X processor, the camera can take sharp images in most conditions. The results are good enough in low-light situations and excellent in bright settings.

When the iPhone 6S came out last year, we asked for photographers’ feedback. For Benjamin Lowy, the quality of the resulting images was impressive, “especially for such a small sensor,” the photojournalist told TIME. “When you print them, they hold up very well. There’s a lot of information there.” So you can expect the same amount of information in images shot with the new iPad Pro.

The major difference is the device’s screen size. Suddenly, you have a 9.7-inch viewfinder — more screen real-estate to carefully compose and frame your images. Third-party apps like Adobe Capture can up the ante with tools like a digital level to ensure that your images are straight. And the screen’s size makes it the perfect device when post-processing your images. We tested Adobe’s Photoshop Fix to smooth out or sharpen our images, using our fingers or the Apple Pencil for precision work.

The result is an incredibly fast and powerful capture-to-sharing mobile device that should, from now on, be taken seriously. Of course, we can’t guarantee you won’t be getting weird looks — it still looks strange to pull out such a large device to take photos. But, as the saying goes, the best camera is the one you have with you. 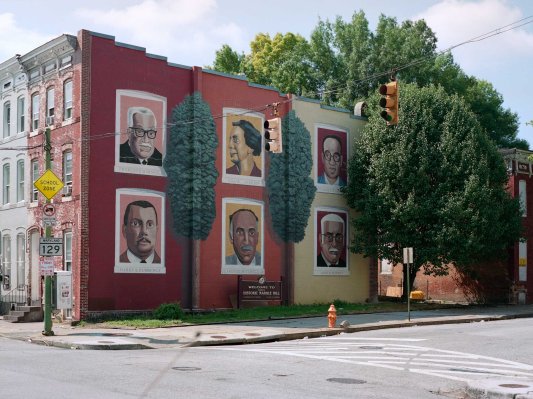 Searching for Answers in Baltimore a Year After Freddie Gray's Death
Next Up: Editor's Pick