9 Questions We Still Have About the Rogue One Trailer

The Rogue One trailer confirmed most of what we already knew about this Star Wars spinoff. A Rebellion crew must steal the plans for the first Death Star so they can destroy it. The story takes place between Episode III and Episode IV. It’s been billed as a boots-on-the-ground look at the life of Rebel soldiers. Just think: Saving Private Ryan in space.

But we also have a few new facts, like that British actress Felicity Jones plays Jyn Erso, a criminal sent on a mission to steal the plans. (See a full explainer of the trailer here.)

I’m not here to answer all of your questions—only LucasFilm president and Force Awakens producer Kathleen Kennedy can do that. I’m just here to tickle your brain with a few queries and maybe point out a few details you missed on the first watch. Here we go. SPOILERS FOR THE FORCE AWAKENS AHEAD.

Let’s address the most obvious rumor first: Jyn Erso is the mother of Rey (Daisy Ridley) from The Force Awakens. People have been trying to figure out Rey’s parentage since December. Could she be the daughter of Luke? Han and Leia? (My personal favorite theory is that she’s the granddaughter of Obi-Wan.)

Now we have another potential parent in the mix with Felicity Jones’ character. They certainly are both handy with a gun. But we don’t see any signs of Jyn being able to use the Force in this movie, and the Force is very strong with Rey—for what that’s worth.

Who is the dude in the white cape?

Looks like an Imperial officer of some sort played by Ben Mendelsohn. One fan theory is that he’s playing Grand Moff Tarkin from the original trilogy — or if he’s another Moff, a title given to Imperial bosses. (Some Internet folks have also questioned whether one shot shows him walking on water. I think that water is just super shallow.)

Another lineage rumor: Mendelsohn is playing the father of Jyn Erso. The theory goes that the reason the Rebels send Jyn, a criminal, to retrieve the plans is because she has an in: her father is an officer with the Empire. This might also explain why she’s seen wearing a uniform with an Imperial logo on it at the end of the film. (More on that in a bit.)

Also if the original Star Wars trilogy has taught us anything, it’s that everyone is related.

Who is Forest Whitaker playing?

Is he a good guy or a bad guy? He looks kind of terrifying, but not necessarily villainous. (If you look on IMDb you’ll notice that most of the character names are not listed.)

Why are the Stormtroops so fashion-forward all of the sudden?

Black and gold are the new white, guys.

Who is Donnie Yen playing?

The actor and martial artist took out that Stormtrooper with just a few flicks of his wrist. Impressive considering this is a world where lightsabers and blasters exist.

Who is the guy in the black cape?

We get a very quick shot of a hooded figure in a black cape. Could this be Darth Vader?

Will Boba Fett show up? Obi-Wan?

Rumors have been swirling about which (if any) of the Episode IV characters could show up in the movie, including Vader. Mon Mothma is definitely in it. You may remember her as the woman who briefed the Rebels on the Battle of Endor plan in the original trilogy. Now she’s here telling Jyn about her mission.

So will we get glimpses at other heroes and villains from the original trilogy? Boba Fett is perhaps the best contender — it’s rumored he’ll get his own spinoff in 2020 (after the Han Solo spinoff in 2018).

Is the Force really not going to be a part of this movie?

We finally have a Star Wars trailer without a single lightsaber. Since this is a war story about the soldiers and spies in the background of the main Star Wars films, it’s likely that nobody in the movie will be able to use the Force. Then again, if that caped figure is really Vader…

Is Jyn an undercover spy or a bad guy?

Jyn is wearing an Imperial gunner uniform. Most likely this is her undercover outfit. But then again, that’s what everyone thought when we saw Finn take off his Stormtrooper helmet at the beginning of the Force Awakens trailer, and he turned out to be an actual Stormtrooper, albiet one who defected). We’ll have to wait and see. 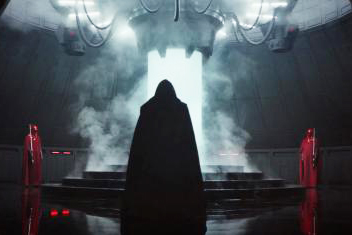 7 Things We Learned From the Rogue One: A Star Wars Story Trailer
Next Up: Editor's Pick