Who is More New York: Hillary Clinton or Bernie Sanders?

There are truisms about New Yorkers that everyone knows. They are combative and proud. Tolerant. Ambitious. “Poetical,” said E.B White. They have a “focus around money and the media,” scoffs Ted Cruz. And they are particular about the way they eat a slice of pizza: Fold it.

Allow Bernie Sanders to weigh in on that last point. “I’m for picking it up and eating it,” the Brooklyn native told the local Fox affiliate last week.

With the state’s Democratic primary less than two weeks away, there has rarely been a better time to go all in for New York. The former senator Hillary Clinton, an adopted daughter, and Sanders, a native son, are circling each other for the title of best New Yorker. It is a competitive sport, played out in speeches, roundtables, television ads and media interviews in the Empire State.

Clinton began last week by praising the state’s proverbial patchwork. “We don’t all look the same or sound the same—or worship the same either—but we pull together,” she said at the Apollo Theater in Harlem last Wednesday.

Then Sanders sent some love to New York City’s outer boroughs: “My wife was born in Brooklyn, New York!” Sanders boasted to a crowd in the Bronx on Thursday.

Clinton tipped her cap to New York’s up-by-the-bootstraps ethos: “What I love about New York is we don’t whine or moan about it. We roll up our sleeves and we get to work,” she said.

And Sanders winked at the honored tradition of subway fare-beating: “Jump over the turnstile,” he joked when asked how one rides the subway.

It is the most attention New York has gotten in a presidential election in decades.

New York is an important state for both candidates. It will send more delegates to the Democratic convention than any other state so far, and after Sanders’ big win on Tuesday in Wisconsin— his sixth out of seven states—Clinton and her aides are hungry for a victory. If Sanders manages to win New York, it will embolden him and stir further doubts about Clinton’s campaign.

Above all, both Clinton and Sanders have to protect their reps: they risk suffering a loss on what they both could fairly call home territory. Clinton is the ambitious immigrant who came to New York looking for opportunity; Sanders is the ornery Brooklynite who left for greener pastures.

The Clintons bought a house in 1999 in Chappaqua, a suburb of New York City, and she represented the state in the Senate for eight years. She fought for federal funding during the post-9/11 recovery and won a landslide victory in her 2006 race. She has visited all 62 counties, tasted virtually every cuisine in the state, from Gianelli’s famous sausage in Syracuse, an aide pointed out, to New York’s famous upstate apples.

Recently, Clinton has taken to expressing her gratitude to the state that launched her political career. “New Yorkers took a chance on me, and I will never forget it,” she said last week.

Sanders, the son of a Jewish immigrant father from Poland, grew up in a cramped apartment in the Midwood neighborhood of Brooklyn and attended the local public schools. He played handball in the streets, ran cross country races in the Bronx’s Van Cortlandt Park and studied a year at Brooklyn College around 1960.

The Vermont Senator has been touting his Brooklyn roots of late. “I am very proud I was born here in New York City,” he said last week at a rally in the Bronx.

In a way, the pair reflects two different flavors of New York.

“Bernie Sanders seems more like a bus kind of guy to me. I’d imagine him taking the B44,” U.S. Rep. Hakeem Jeffries said in an interview, referring to a bus route in central Brooklyn near where he and Sanders both grew up.

Jeffries, who represents parts of Brooklyn and Queens in Congress, has endorsed Clinton, as have most of New York’s leading politicians, including Mayor Bill de Blasio, Gov. Andrew Cuomo and both of New York’s Senators.

“Hillary Clinton is clearly more cosmopolitan,” Jeffries added. “She’s the type of person that could relate both to Brooklyn as well as to what we refer to as ‘The City,’ a.k.a. ‘Manhattan.’”

Their appeals to New York are part of a long-established tradition of political pandering. Presidential candidates do their best to localize their campaigns and capture the local flavor. Gov. Martin O’Malley sang the Iowa Waltz for Iowans. Carly Fiorina was mocked in January when she said she was supporting the University of Iowa in the Rose Bowl against her alma mater, Stanford. This week in dairy-rich Wisconsin, Cruz told reporters of his love for cheese. “I like cheese on cheese,” he said.

Sanders gets props from his supporters for his upbringing in New York. “Even though I’m from the Bronx and we got our thing against Brooklyn,” said supporter Nestor Lopez after a rally in the South Bronx’s St. Mary’s Park, “he knows the New York show.”

But Sanders left the city in 1968 for good, choosing instead a town—Burlington, Vermont—that is more or less the opposite of New York. When Sanders was 12 years old and living in Brooklyn, he would have paid 15 cents for a single subway token. For nearly the last two decades, New Yorkers have used pre-paid Metrocards.

In an interview with New York Daily News, it did not appear that the Vermont Senator was aware of this invention. “What do you mean, ‘How do you ride the subway these days?’” Sanders said incredulously. “You get a token and you get on.”

It’s these moments that Clinton supporters seize on, insisting their candidate is a wiser New Yorker than her opponent. Sanders gets no “street cred” for leaving, Rep. Yvette Clarke, who represents Sanders’ old Brooklyn neighborhood, said in an interview. “Does Senator Sanders know what beef on weck is?” asked her traveling press secretary, Nick Merrill. (Beef on weck is a specialty roast beef sandwich found primarily in Western New York.)

Clinton herself seems eager to undermine Sanders claims to his hometown. “My opponent says, we’re just not thinking big enough. Well, this is New York, nobody dreams bigger than we do,” Clinton said last week at the Apollo Theater in Harlem. “But this is a city that likes to get things done! That’s what we need for our president, too.” And the coup de grâce in an interview with CNN a week later: “Look, I think I know the state a lot better,” she said.

That may be hard to contest. She’s been to all corners of the Empire State, from Montauk to Buffalo, some places many times. Clinton kept a bowl of New York apples in her State Department office. She, her husband and then-Mayor Michael Bloomberg dropped the ball in Times Square to ring in 2009.

But Clinton is not a native New Yorker herself and not much accustomed to its rougher edges. She almost never works out of her Brooklyn campaign headquarters, choosing instead to visit a Manhattan office.

That hasn’t stopped Clinton from repping the concrete jungle. “The fellow who’s from New York?” she challenged Donald Trump on Tuesday in Brooklyn. “I wish he’d get out of one of his towers and actually walk the streets.”

And as for eating pizza? Clinton folds it. 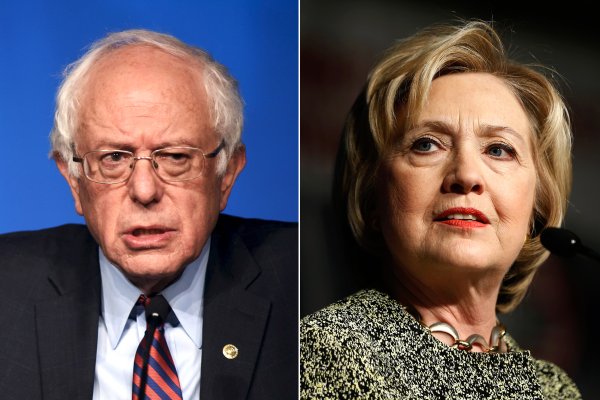 Clinton and Sanders in Bitter Clash Over Qualifications
Next Up: Editor's Pick