The DEA Will Soon Decide Whether It Will Reclassify Marijuana

An Israeli woman works on marijuana plants at the BOL (Breath Of Life) Pharma greenhouse in the country's second-largest medical cannabis plantation, near Kfar Pines in northern Israel, on March 9, 2016.
Jack Guez—AFP/Getty Images
By Fortune

The Drug Enforcement Administration says it will make a decision in the coming months that could prove to be a watershed moment for the burgeoning legal marijuana industry.

In a memo to lawmakers this week, the DEA announced plans to decide “in the first half of 2016” whether or not it will reschedule marijuana, according to The Washington Post. Cannabis is now listed under the Controlled Substances Act as a Schedule 1 drug, a categorization it shares with other drugs, such as heroin and LSD, which the U.S. government defines as “the most dangerous drugs” that have “no currently accepted medical use and a high potential for abuse.”

Advocates for marijuana legalization have long argued that the drug should be rescheduled, considering marijuana’s relative safety when compared to a drug like heroin, which caused roughly 11,000 overdose deaths in 2014, according to the National Institutes of Health. The argument for rescheduling marijuana also revolves largely around the drug’s potential for medical use, as 23 states have already legalized medical pot to treat a variety of maladies—from cancer to chronic pain—and U.S. Surgeon General Vivek Murthy even admitted last year that “marijuana can be helpful” for certain medical conditions.

Should the DEA decide to reschedule marijuana, bumping it down with supposedly less dangerous drugs such as cocaine (Schedule 2) or ketamine (Schedule 3), the move would likely open the door for expanded research of cannabis’ potential for medical applications. As it stands, the government has an exclusive contract with a University of Mississippi research lab to grow marijuana for the purpose of medical research, and the DEA notes in its letter that the government supplied an average of just nine researchers with marijuana for research purposes per year between 2010 and 2015.

Rescheduling could also have a major financial effect on the legal marijuana industry, which some estimates suggest will hit $6.7 billion in sales this year while expanding to nearly $22 billion by 2020. While more and more states have voted to legalize marijuana in some form over the past several years, the drug remains very much illegal on the federal level—an inconvenient fact for a rapidly expanding industry that has led to a range of issues for marijuana-related businesses, from a lack of banking options to federal tax issues. 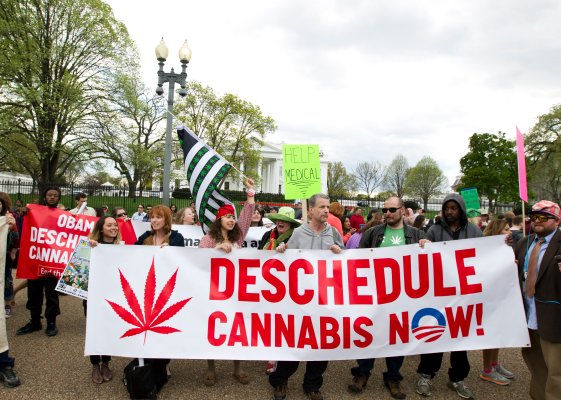 Marijuana Activists Smoke Up Outside White House
Next Up: Editor's Pick