The People v. O.J. Simpson Finale Proved the Show Is a Modern Masterpiece

Tuesday night’s finale of The People v. O.J. Simpson was enough to make a viewer want much more—and feel very grateful that’s all there was.

Over a perfectly pitched ten episodes, the FX series methodically built its own multilayered case. The show sought to prove that the collision of race and power in the O.J. Simpson trial was both completely sui generis and the forerunner of contemporary policing controversies; that Marcia Clark, played by Sarah Paulson, had been mistreated by her contemporaries and by history; and that a TV show with a great deal on its mind could still move elegantly and with self-assurance.

The real O.J. trial stretched on for months on end; the televised one, also a ratings hit, was over all too swiftly. But that accounts for its power, and not just because its limited run guaranteed the stars would actually be able to participate. In an era that has become defined by the notion of there being “too much TV”—and too-long runs of shows to endlessly binge—The People v. O.J. Simpson‘s episodes each had a specific point and point-of-view. There wasn’t a “filler episode” to allow the writers to put story pieces into place, and there was not a single missed opportunity to convey information or emotion.

From the baggy suits on all the men to the casting, perfect down to the bit parts, the show hit all the right notes, and its few missteps (for instance, an early overemphasis on the Kardashian family) yielded brilliance nonetheless (David Schwimmer’s performance as an increasingly torn Robert Kardashian). The smallest thing could be parsed: the jury forewoman stumbling over the name “Orenthal James” when delivering the verdict was one of the finale’s many such touches, a reminder that history is, even or especially in the small ways, subject to human error and oddity.

A lot of the show’s emotion seems to this viewer somewhat fictionalized, up to and including the dynamic between Clark and Christopher Darden in their final moments onscreen, as they literally support one another on a walk to get a drink as companions. Who cares? Over its run, the show moved from straight history to history play, growing more and more brazen in using characters to illustrate points that were larger than the trial. It’s very easy to say, airily, that the O.J. Simpson trial was representative of larger trends in the culture. This show did the work.

As for the show’s final moments, in which the show depicted the real Simpson, Kardashian, Clark and the rest while telling us where they ended up—I’m no particular fan of onscreen chyrons telling us where characters ended up. And the show is so immersive in its time and place that ending on O.J. Simpson’s realization in 1995 that he’s a pariah would have had its own very special kind of power. But I appreciated it as a way to bring us back to the unresolved matter at hand. The final image of the show is of two people the series never showed onscreen at all: Nicole Brown Simpson and Ron Goldman. That the facts of the case got so far away from them is a historical accident; that the series about all the factors that led to that misplacement of priorities ends by trying to redress the balance just a little is the best kind of grace note. 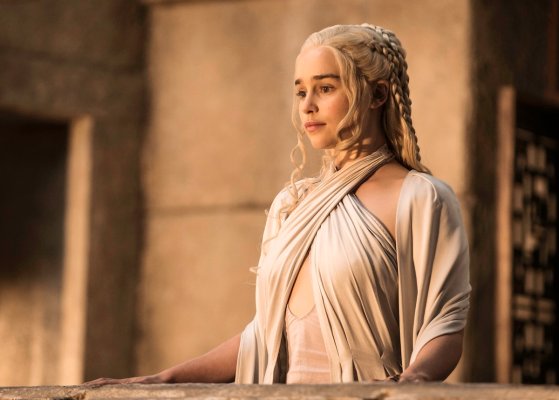 In Emilia Clarke's Ideal Game of Thrones, All Men Must Strip
Next Up: Editor's Pick