Why I Started Lying to My Fitbit

Let’s face it: There aren’t many relationships that need full and constant honesty to function. In fact, it’s kind of the opposite. Keeping certain opinions or online purchases to ourselves is an essential kindness in marriage. I even know people who curate what they tell their therapist for fear of not being a likable enough client. “I need someone in my life who likes me just for the me I want to see myself as,” they say. But they don’t mean it.

And of course, we know that our social-media feeds are really just an endless personal infomercial, as much fantasy as truth. Studies show we also lie to our doctors about what we eat and drink and smoke. And they hedge right back. They don’t like to tell you you’re 15 lb. overweight any more than your best friend would. Instead, it’s all: “I’d like to see your BMI down a few points,” the same way they’d say, “I’d like to see Starbucks bring back the small-size cups. That’d be good.”

Subscribe here to get an essay from Susanna every Sunday.

But at last I’ve entered into an utterly truthful relationship. It began last summer when I got one of the new wearable fitness trackers. These things don’t just count your steps anymore. Now they know everything about you, so there’s no point in lying to them. The Fitbit wristband monitors my heart rate, and it knows not only how many hours I sleep but also how many times and exactly when I was “restless” in the night (6x) and that I was totally awake from 1:06 a.m. until 1:21 a.m. last night. It’s more interested in me than I am.

In return, I’ve told Fitbit how much I really weigh, a secret that I’ve never revealed to anyone while sober. Not even my ex-husband knew, and more dangerously, not even the people who set up bungee jumps and parasailing rigs. (I’m somewhat sure that the bungee guy took one look at me and guessed that I did not weigh 123 lb., but never mind.)

Once I opened up to Fitbit about my weight, it set up a daily calorie allotment for me. All I have to do is tell it everything I eat. And it tells me when I’ve gone over. A little bar graph goes red on my phone. It’s indisputable. It’s instant. It’s the brutal truth. On the other hand, when I do well and have many “active minutes” per day, Fitbit is incredibly supportive. It blinks. It sends sweet, celebratory messages to my phone and email. And it remembers all our anniversaries, like how six months ago I could manage only 11 active minutes a day.

At first I considered just not telling Fitbit about the curry puffs they were handing out at office parties. But deceiving Fitbit would be like writing a fake diary, which people do, but only when they want to publish it later. And besides, no one will ever see my Fitbit log if I can help it. I’m on the hunt for some sort of third-party Fitbit app that erases all my data if I die.

I realize that the people who run Fitbit have all these intimate details of my life, as does Apple. And if a backdoor iPhone hack ever gets into the wrong hands, the world will know what I and the 78 million other people who bought trackers last year had for breakfast, not to mention all our real measurements. It could make the celebrity naked selfie scandal of 2014 look tame. Until then, I plan to think of all my personal info out there in the cloud the way I think of the ladies in those old-fashioned lingerie shops where they fit you for bras or the receptionist at a dermatologist’s office. They are isolated islands of honesty, disconnected from the rest of your life.

But as we all know, app-based relationships don’t usually last. Fitbit and I have already had ups and downs in our short time together. I left it behind when I went on vacation in Costa Rica last month. I did yoga with my daughters and watched blissed-out sloths racking up only four or five steps an hour. (Moss was literally growing on their backs.) I ate untallied bread recklessly. When I got home, I put Fitbit back on, but I didn’t feel as connected anymore. I started omitting little things, like the popcorn I eat at the office. I kept “forgetting” to log my weight. The Fitbit effect is fading.

And I just found out about a new device that’s a kind of S&M Fitbit. There’s no sharing. And no compliments. It’s called a Pavlok, and it allows you to self-administer a shock of up to 450 volts via a wristband if you engage in a habit you’re trying to stop. Creator Maneesh Sethi thought it up after he hired a woman on Craigslist to slap him if he went off task at work. (His productivity went way up.) A guy in the Pavlok testimonial video says he shocked himself just for smelling potato chips, and a woman named Tasha can’t even look at peanut-butter pie anymore. Now the company is releasing an interface that permits Pavlok to communicate with your Fitbit and automatically zap you if you don’t reach your goal for the day. It could be a whole new beginning for me and Fitbit.

This originally appeared in the March 21, 2016 issue of TIME. 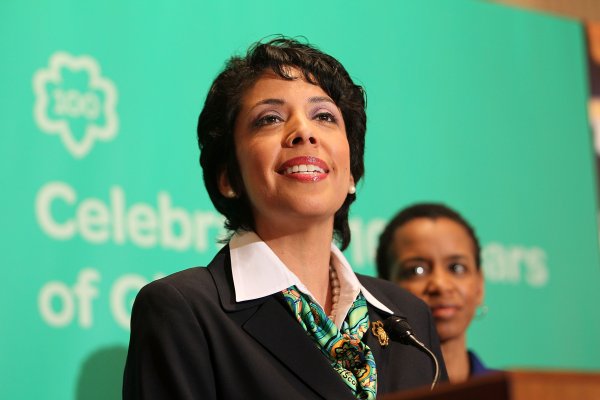 Girl Scouts CEO: Why We Need to Nurture Girls’ Potential
Next Up: Editor's Pick