Ted Cruz could hardly contain his excitement in the lead-up to Tuesday’s primary in Wisconsin, where he is the favorite over Donald Trump.

Visiting the Mars Cheese Castle in Kenosha with Wisconsin Gov. Scott Walker, the latest mainstream Republican to back his presidential campaign, the Texas Senator proclaimed himself a lover of the dairy land state’s signature export. “To be honest, I like cheese on cheese,” he joked between samples.

At a subsequent stop he played along when a reporter asked if he would arm the “cheese curds,” a play on the Middle East ethnic group at the center of the foreign policy debate.

Cruz had good reason to be happy. Polls show him up by as many as 10 points over Trump as he looks to secure a victory in the pivotal state. Such a blow-out would assure him the vast majority, if not all, of the state’s 42 convention delegates, and make Trump’s path to the nomination before the Republican convention in Cleveland all the more unlikely.

But a Wisconsin victory would bring more to Cruz than just delegates. It would also validate Cruz’s efforts to build a broad coalition of Republicans to stop Trump even in states where he should have been favored.

Cruz has united the state’s conservative talk radio, it’s three-time elected GOP governor, and a host of local officials behind his candidacy—a level of consolidation he had yet to muster on the campaign trail.

For Trump, the state is set to be a disappointment, despite an all-out effort that included skipping family events to campaign and increasing his paid media buys in the final days. The Midwestern industrial and agricultural state has an open primary that should have been a Trump advantage, but for the candidate known for selling out venues, his final event was barely at half-capacity.

The state’s high-turnout and high-information voters are an anomaly on the campaign trail, a function of the state’s political culture. But Trump, who has seen some of his best successes in states with higher turnout, is likely to meet his match. Republican observers maintain Trump made a critical error when he repeatedly attacked Walker’s economic record in the state.

On the GOP side, the state awards its delegates in a hybrid formula where the winner of each congressional district’s vote wins 3 convention delegates, with the balance awarded to the highest statewide voter-getter.

On the Democratic side, the proportional contest is the latest battlefront for former Secretary of State Hillary Clinton and Vermont Sen. Bernie Sanders.

Clinton aides have been lowering expectations over the past week in the state, pointing to Sanders’ inherent advantages in the state: Wisconsin Democrats are liberal and predominantly white, with a large number of college students. The state’s open primary means independents can vote as well, which has given Sanders a boost in the past.

But even if Sanders wins—it would be his sixth straight victory—Wisconsin is unlikely to change the course of the primary. Sanders has an overwhelming disadvantage in delegates, lagging Clinton by around 230. Clinton can increasingly claim the mantle of the party: she has so far won nearly 9 million votes in primary contests, about 2.5 million more than Sanders.

After Wisconsin, the candidates move on to New York and the Eastern seaboard, where Clinton is favored.

“The delegate math is on our side,” said Clinton campaign manager Robby Mook in a memo. And “with each passing week, it’s becoming increasingly unlikely that Senator Sanders will be able to catch up.”

Sanders was in Wisconsin campaigning heavily over the last weeks, seeking to attract students as well as a large base of disaffected unions that have been weakened by Walker’s policies. Clinton was in New York last week and on Monday, reflecting, perhaps, where her attention is. Former President Bill Clinton was campaigning in Wisconsin on Monday. 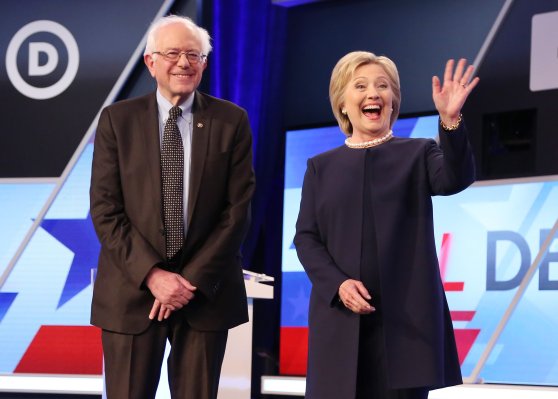 Clinton and Sanders Agree to Hold Brooklyn Debate
Next Up: Editor's Pick