All night long, the game had that feel. It was tight, intense, bound to come down to the very end. Before 74,340 fans at NRG Stadium in Houston Monday, Villanova and North Carolina played a national championship game with wild swings. Carolina couldn’t miss in the first half. Villanova got hot in the second. The undersized Wildcats hit tough shot after tough shot, and on defense, pestered Carolina’s longer players down low. The Tar Heels couldn’t hide their frustration. Two free throws from Villanova’s Phil Booth — who came off the bench to score 20 points, on 6 for 7 shooting — gave the Wildcats a double-digit lead, 67-57, with 5:29 to go.

When Villanova won their last championship in 1985, the Wildcats slayed Georgetown, who was heavily favored and featured Patrick Ewing, the best player in the county. They were a charming underdog with a rascally coach, Rollie Massimino. This Villanova team spent a portion of the regular season as the top team in the country. ‘Nova romped through the first three rounds, knocked off the top-seeded team in the tournament — Kansas — in the Elite 8, and then wiped out Oklahoma in the national semifinal, by an historic margin. The Wildcats thoroughly earned this championship.

Until it slipped away.

Carolina finally started clamping down on D, blocking shots, using their size. The Tar Heels sank a couple of huge threes. With a minute left, they were down just a point, 70-69. Carolina suffocated Villanova on the next possession: Booth drove into the lane, with nowhere to go, before Isaiah Hicks of North Carolina fouled him. Cheap call, but no matter: Booth hit both foul shots to push the lead back to three, 72-69. Carolina pushed the ball up the floor and Marcus Paige drove for the quick two-pointer, but he blew the layup! But somehow, he wrestled the ball for an offensive rebound, and willed it back into the basket. 72-71 Villanova.

Now things got really good. Because college basketball — on that big a stage, with a national title at stake — has never seen a final sequence like this one. Search around all sports to find a championship finish that will cause you to scream in disbelief, twice. It won’t be easy.

Carolina took the ball out under its own basket. Johnson inbounded it to Berry, who crossed half-court at 12.3 seconds. Since college basketball introduced the three-point line in 1986, coaches have faced an end-of-game dilemma. If you’re up three in the waning seconds, do you foul the opposing player before he can launch a three-point shot, putting him on the foul line instead? Math says that’s a sound strategy. The surest way to prevent a player from making a three-point shot is not letting him take one.

But many coaches fear their players will inadvertently foul an opponent while he’s shooting a three, giving him three free throws. So they just play D.

Villanova coach Jay Wright chose this strategy. It seemed to be working. Berry dribbled to his right, still back near the half-court logo, with 9.4 seconds left and Villanova’s Mikal Bridges in front of him. The whole gym knew Berry was looking for Paige, who had come off a screen from Johnson: Villanova big man Daniel Ochefu denied Paige the ball 0ut high, on the right side of the floor. Berry threw a bounce pass to Paige anyhow. Ochefu dove for the ball, somehow missed it, and fell to the ground, giving Paige an opening. At 8.3 seconds, Paige caught the ball. He took two dribbles with his right hand and raised up to shoot with his left. Villanova’s Ryan Arcidiacono, however, was in perfect position to help: he jumped at Paige, disrupting his shot.

But in mid-air, at 7 seconds, Paige double-pumped, sending Arcidiacono soaring by him. A half-second later, Paige — feet still off the ground — let a three-pointer fly. It was the type of desperation heave you try while messing around with your friends in the driveway. It never goes in. With 4.7 seconds left, Paige’s miracle rattled in the basket. Tie game. Bedlam. Disbelief. Timeout Villanova.

The Wildcats now had less than five seconds to go the length of the floor and win the game. Otherwise, heartbreak and overtime. Could Villanova bounce back after surrendering that lead, and suffering Paige’s gut punch? Ochefu grabbed a mop from a young attendant, and started cleaning up a wet spot along the baseline, easing the tension a bit. Kris Jenkins inbounded the ball. At times in this game, Jenkins looked like Charles Barkley in his prime: too small, a tad rotund, but still unstoppable. He hit a three earlier in the half that put Villanova up by seven points. Jenkins was 94 feet from the basket. No one was guarding him.

Jenkins tossed it into Arcidiacono, who dribbled down the left side, past Ochefu’s mop-work. Jenkins trailed behind him, all alone. Arcidiacono crossed his dribble to his right hand, and passed mid-court, in front of the NCAA logo, at 2.7 seconds. Jenkins still trailed him, like a running back in the option play, still solo. Two Carolina defenders, Berry and Isaiah Hicks, converged on Arcidiacono. North Carolina’s Brice Johnson remained back in the foul lane, not guarding a soul. Jenkins called for the ball. “Arch! Arch! Arch!” he screamed. Arcidiacono had an easy decision. He flipped the ball to Jenkins while crossing in front of Berry and Hicks, creating a natural screen for his teammate. Jenkins caught it at 1.5 seconds, set himself, and released a rainbow. Hicks lunged at it, late, waving at air. Jenkins, whose mom discouraged him from taking outside shots when he was younger, won the national championship with a long three.

Cue the confetti. Villanova won it all at the buzzer, 77-74. Carolina fought back and made it a game. And we’ll all get to relive these final five seconds, for years. 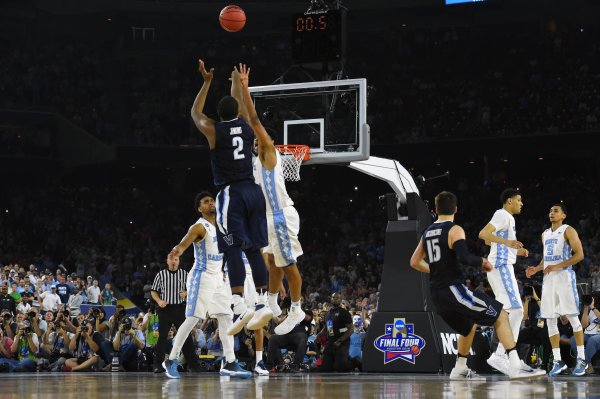 Watch the Buzzer-Beater That Ended the NCAA Championship
Next Up: Editor's Pick