Amazon's New Gadget Turns Your Speaker System Into An Echo

The good: Amazon’s Alexa voice assistant comes to the speakers you already own

Who should buy it: Audiophiles who want the Echo’s smarts in their existing sound setups

The Amazon Echo, an Internet-connected smart speaker that can answer owners’ verbal questions and requests, has quietly become one of the hottest gadgets of the past few months. And with the arrival of the new Tap and Dot, Amazon is taking the Echo’s smarts, powered by a Siri-like software called “Alexa,” and packing them into two new form factors.

The Tap is a smaller, mobile version of the Echo, whose power cord keeps it stuck indoors. The Dot is meant to connect to your existing sound system, bringing Echo’s smarts to the speakers you already own.

Both devices function almost identically to the Echo. And both are compatible with all the great third-party apps (called “skills”) that already exist for that device. But the Tap and Dot are two very different gadgets. And while the Tap may be one step back, the Dot is two steps forward.

Not only a handy digital assistant, Amazon’s original Echo is also a great speaker. But some audiophiles weren’t quite ready to throw away their Bose with the the bathwater. And who can blame them — there’s no reason to mothball a perfectly good speaker just because you can’t order a Domino’s pizza on it.

Amazon’s answer for those would-be users is the Dot, an $89 device slightly larger than a tobacco tin. Plugging the Dot into an audio system or speaker via a cable makes the device “smart,” able to handle questions like “What time is the Mets game?”

Ask Dot a question or make a request, and the device’s lights will glow blue as the voice assistant issues its answer over your speaker. I’m looking forward to using Dot with my home theater setup for playing Spotify, controlling my Hue smart lights, and asking my surround sound system dumb questions like I was Tony Stark.

Dot can also connect to speakers via Bluetooth. This was the most pleasant surprise in playing with Amazon’s latest gadget. I plugged the Dot into the wall on one side of the room, while music streamed from my Bluetooth speaker located on the other. This is helpful because you can place Dot in an area where it will better hear your requests, but you can stash your speakers where you prefer to relax. With Dot’s far-field voice recognition technology, it can hear your queries from a room away, even when music is playing.

Dot’s biggest downside is that it’s currently hard to buy. To manage limited availability, Amazon decided that the only way to buy a Dot is to place the order using an Echo. “We wanted to have Echo customers who have helped us shape that product be the first to try this new device,” says an Amazon spokesperson.

Sadly, that leaves many people out in the cold. If you want a Dot, you better strike a deal with an Echo owner who doesn’t want theirs. Don’t ask me, though. This one’s a keeper. 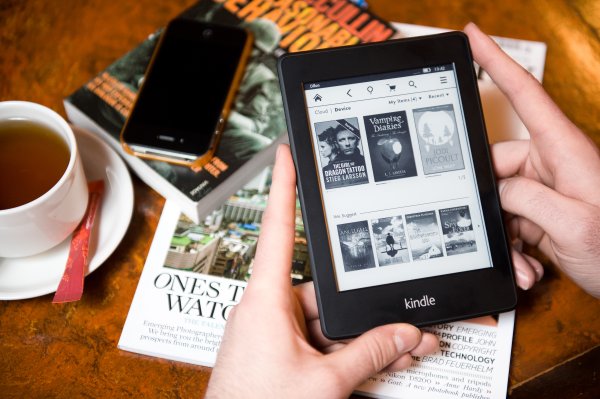 Amazon CEO: We've Got a New Kindle Coming
Next Up: Editor's Pick