Anita Hill on Confirmation, What Joe Biden Did Wrong and the Clintons

Twenty-five years after appearing at Clarence Thomas’s Supreme Court confirmation hearings and telling the Senate Judiciary Committee that Thomas, her former boss, had sexually harassed her, Anita Hill will be thrust back into the spotlight with the HBO movie Confirmation. The film chronicles those hearings, and the media frenzy that surrounded them, with Scandal’s Kerry Washington starring as Hill.

Today a professor at Brandeis University, Hill says she has mixed feelings about the episode. She believes that the committee, led by Joe Biden, then the committee chair, didn’t offer her a fair hearing. The episode did inspire millions of women to speak out about sexual harassment and assault and encouraged many women to run for public office. Hill spoke with TIME about why Thomas’ declaration that the proceedings were a “high-tech lynching” hurt African-American women, how the 2016 presidential race will affect women’s rights and the evolution of feminism from the days of the Monica Lewinsky scandal to Hillary Clinton’s campaign for the country’s highest office.

How do you feel about being the subject of this film?
The film depicts an important moment in our history. It’s part of our fabric. Usually I get that question in the form of, “Well do you really want to bring this all up again?” Yes. Twenty-five years later, we have an entire generation of people who were not even born at that time. It will help them understand where we come from and hopefully give them information to keep going forward.

What were Kerry Washington’s questions for you?
One thing that I loved about her was that she does her homework. So she wasn’t asking me basic questions about the hearing. I think she was very interested in tapping into my emotional state throughout the hearings.

What is the legacy of the hearings?
A conversation which had been private can become public, and you see the legacy of that now with college women protesting sexual harassment and assault.

But the hearing also influenced how employers would react to sexual harassment, how universities would react to it, and we’re still trying to dig out from that. The Senate, instead of reflecting the best practices that had been developed at that point, lapsed into combativeness. The hearings showed people what happens when representatives don’t make a real attempt to get to the bottom of issues and to understand how sexual harassment works.

Did you expect more help from Democrats, like committee chairman Joe Biden?
I expected a fair process. If you file a sexual-harassment complaint in an office, what you find in the best instances is a neutral investigative process. That never happened. I did expect that the chair would be fair and gather the testimony from the relevant witnesses, like the three women who were not called in to testify, like the experts on sexual harassment that could have helped inform the committee about how the problem manifests itself.

Have you spoken to Vice President Biden since the hearings?
No.

How would the hearings be different if they happened today?
I’m not sure they would happen.

What did you think of Justice Thomas breaking his long silence on the Supreme Court?
I am not objective when it comes to Clarence Thomas, and I shouldn’t even pretend that I can be.

What do you think of the possibility that Judge Merrick Garland won’t get a hearing anytime in the near future?
It’s a travesty. Whatever the outcome is, he deserves a fair process, and that’s really all I’ve been talking about all along. There’s a process in place. Conduct it fairly, and we’ll see whether or not he should be confirmed.

Some conservatives have said the movie is liberal propaganda. What’s your response to that?
I really don’t have any idea what they’re talking about. I know that there was a lot of research done, there was outreach to people involved on all sides of the issues.

You teach courses on gender equality at Brandeis. What impact do you think Hillary Clinton winning the election would have?
I think we need a female President. It’s very symbolic. People sort of say, “Oh well, that’s not anything.” But I think it’s a lot. We know from research that girls — and boys — respond to role models, and to have women as models of leadership I think is significant to [children’s] development.

But we also have to have someone who really understands the experiences of women, at work and in the home, in terms of policies need to be developed to address questions of equality — why we need equal pay or access to childcare or family leave.

I’ll give you an example: Ruth Bader Ginsburg and the Lily Ledbetter case. I think if Ruth Bader Ginsburg had not been such a clear and strong voice — in that one case in particular, and in many others — we still would have the court requiring women to somehow on their own find out what their peers are paid. We would have policy where many women would never be able to recover for decades from lost wages. So that’s why it’s important to have, as Ruth Bader Ginsburg herself said, nine women on the court.

As another likely candidate, we have Trump who has made blatantly sexist remarks.
Whether we vote for the person or not, the President is a model. The President sets the standard for public discourse, for how young people in particular imagine leadership. The things that come from Donald Trump’s mouth about women, that sends a horrible message.

During this presidential election some women have argued millennial women who grew up with Title IX and laws against sexual harassment take those things for granted. Do you think that’s true?
I don’t think they take things for granted. I do think we don’t do necessarily a great job about teaching people a history about how they got to where they are, but that’s different than taking things for granted. I think they’ve got real strong ideas about how they want to be treated in the workplace. They may not realize the obstacles that will come their way exactly, but they have strong feelings about fairness and equity.

And that’s the legacy that I want them to remember. They don’t necessarily need to know my name, but to take that away. You see that on campuses with Title IX, they’re standing up for themselves. They’re filing complaints. And I hope that the film can bring new energy and new inspiration to them.

What do you think of the way the media treated Monica Lewinsky?
Even if it was consensual, that power imbalance was damaging. It sent a message to young women in the workplace about how to “get ahead.” And that to me was one of the issues we miss when we say it’s two people with a power imbalance, but it was consensual. I’m not willing to let it go at that.

Now Hillary Clinton is being asked questions about Lewinsky. Is that valid?
It’s not idle gossip. It has consequences, in terms of Hillary’s record. But unfortunately, the narrative pits women against each other, and that is sadly typical in the media. But I’m hoping with more inclusive voices in the media we will be able to tell the story about women’s experiences in a way that’s true to what those experiences are.

That women-against-women narrative is so pervasive. And yet it was a group of Congresswomen who demanded that Biden and the committee hear your testimony.
I will say: if those women from Congress had not marched over to the Senate and demanded a hearing, I do not think it would have happened. That, to me, is leadership. And that’s why we need more women in leadership positions. We haven’t even come close in terms of representation to a critical mass. 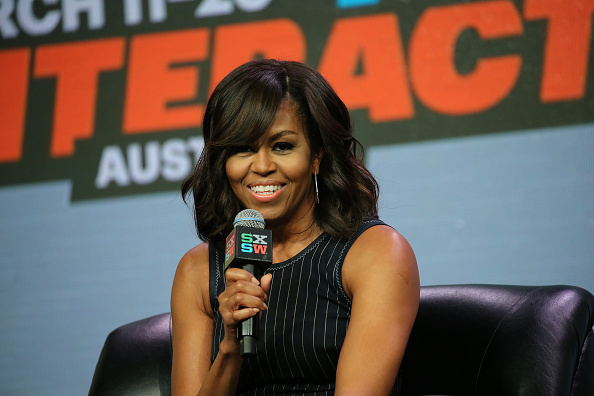 Michelle Obama's Viral Turnip Vine Is Back — With Steph Curry
Next Up: Editor's Pick