The good: Accurate and fluid motion controllers; allows players to walk around in a virtual environment; strong selection of games
The bad: Expensive; lots of gear to keep track of; must remain tethered to PC
Who should buy: Gamers with a compatible PC seeking a virtual reality experience that’s more about interaction and exploration than roller coaster thrills

Looking down at the landscape littered with intruders, I aligned my shot with what I perceived to be precision. Pulling back with my right arm, I launched an arrow that ever so narrowly missed my target, barely grazing his helmet. This was possible because the two video game controllers I was holding in my hands can transform into nearly any tool depending on the situation: a bow-and-arrow in this case, in others an enchanted staff that can cast fire or a magic paintbrush capable of conceiving anything from animated snowflakes to glowing rainbows.

These are a few of the experiences I had using the $799 HTC Vive virtual reality headset, which began shipping to customers on April 5. The gadget runs on Steam created by Valve, meaning it will look familiar to gamers who typically use the gaming storefront on a PC or Steam Machine. Like the Oculus Rift, the Vive is meant to bring powerful, immersive, high-end virtual reality experiences to the home. But it differs from the Rift and other competing products in important ways.

While many of the Rift’s games and experiences require you to move your character with a video game controller (Oculus’ motion controllers are coming later this year), the Vive allows you to physically interact with the virtual environment you’re seeing through the headset. This means you can lift a virtual bow-and-arrow and position your arms as if you were actually holding the real weapon to fire it. You can pick up and examine objects as if you were holding them in your hand—a charming characteristic that’s sure to work its way into mystery and puzzle games. These elements add a new dimension to virtual reality that makes it feel all the more authentic. The Vive provides the most wowing experience of VR so far.

MORE: These Are the 5 Best HTC Vive Launch Games

But an experience like this also means there’s a bit more work to be done when it comes to the setup process compared to the Rift. Two base stations are included in the Vive kit, which work best when mounted in a high area at opposing ends of your room. These black boxes emit lasers that scan the room, which are detected by the Vive headset and its controllers. This system helps the PC keep track of where the Vive and motion controllers are located in the virtual environment.

The Vive then scales apps and games to fit in a real-world space of up to 15 x 15-feet, which makes objects and environments appear at a size that makes sense for the room you’re currently playing in. To get the best results out of the Vive, though, you’ll have to clear a decent amount of empty space, which can be a challenge for those living in tighter quarters.

If you’re worried about walking into walls, there’s a safety measure in place to ensure you don’t venture beyond the Vive’s designated area to prevent such accidents. When setting up the Vive, the machine will ask you to map out the space in which you plan to use the headset by physically tracing a border around the room with a controller. This is what the Vive calls the “play area,” and if you come close to its border during gameplay, a glowing, Matrix-esque grid will appear to warn you to stop. This is subtle but effective—the grid appears prominently enough to alert you, but not so much that it interferes with gameplay.

The setup process takes roughly 20 to 30 minutes and is relatively simple thanks to the Vive’s tutorial. Launching the Vive app on your desktop will walk you through all of the steps, which generally include logging in with your Steam account, mounting the sensors, plugging the headset into your computer, turning on the controllers, and calibrating the room.

You can also access the room calibration tool any time within the Steam interface if something doesn’t feel right. The first time we set up the Vive, for example, we calibrated the floor incorrectly, so the game’s virtual ground sat at my waist instead of near my feet. Fixing the issue only took a few minutes.

The Vive is just as conspicuous as it is mesmerizing. Because it generates a digital environment that feels ultra realistic, it needs to remain tethered to a powerful PC to prevent any latency—just like the Rift. The downside is that a trail of dangling wires follows as you move around in virtual reality, which you’ll need to be aware of during gameplay to avoid tripping. It can sometimes take you out of the experience, but it’s worth the trade off to avoid lag and stutter.

Although the Vive headset looks and feels slightly bulkier than the Rift, it fits snugly and was comfortable to wear. I didn’t find myself toggling the focus or adjusting the straps very often, which is helpful for maintaining a seamless experience.

With Oculus’ Rift, you’re restricted mostly to sitting experiences, waggling thumbsticks or tapping buttons on a gamepad—the novelty’s all in what you can do with your head. The Vive adds both of your hands by way of large dual wands that look a bit like Boba Fett’s Slave One. The difference these make in virtual space is staggering.

MORE: Which Virtual Reality Headset Should I Buy?

Instead of indirect controls, your hands become whatever an experience warrants: a pair of grasping gloves or laser-spitting guns, or a single, swooshing paintbrush. It’s partly next-gen Wii, sure, but with far more precise motion tracking, the crucial distinction being that all the input-output’s transpiring around you instead of on a flat two-dimensional screen half a dozen feet away.

It’s a difference you can measure in astonished expletives whenever you slip the headset onto curious passerby. In Google’s bundled Tilt Brush, for instance, players transform empty space into a montage of stirring chromatic light by swinging a virtual brush around. Rifle through a simple selection tool and you can add twinkling stars, smoke, swirls of blinking neon or frame your creation against a cosmic backdrop.

Freebie download The Lab allows you to visit the top of a mountain by way of vertiginous vantage points in what amounts to a VR-movement tutorial, teleporting around (including over to a stomach-dropping precipice) by simply pointing a wand and clicking. In another, you can slingshot spheroid robots (styled after Wheatley from Portal 2) at piles of boxes in a warehouse (an obvious nod to Angry Birds). It’s breezy proof-of-concept stuff, but an obvious go-to showcase, say a friend drops by and you want to show them what the whole VR thing’s about.

The other bundled Vive must-try, Job Simulator, lets you wing donuts at a frowny floating computer or joggle 2-liter bottles of soda until they detonate. The year is 2050, robots have supplanted human labor, and so it’s left to virtual reality to remind us what line-cooking, office-cubing and store-clerking was like—or would have been through a lens anarchically. Owlchemy Labs’ turns busywork into a carnival of irreverent gestures, laying playgrounds of objects before your Mickey Mouse-gloved hands and letting your imagination do the rest.

And if you’d rather try a straightforward adventure, Cloudhead Games’ $29.99 The Gallery: Call of the Starseed exemplifies why virtual reality’s breaking wave of whatchamacallit experiences work best when moving you gradually through otherworldly venues in lieu of barf-o-rama spectacle. Call of the Starseed kicks off an episodic story inspired by 1980s dark fantasy films and old-school graphical adventure games, sending you after a missing sibling and through a gauntlet of environmental puzzles. But it’s just as much about the thrill of using two hands to perform intuitive actions, like holding a flickering candle up in near darkness to tease the mysteries from a hand-scrawled note.

Should you buy one? The Vive is expensive, not particularly lacking in commitments (it requires a significant amount of space and wiring), and requires a beefy PC. But it’s the most immersive and complete VR experience out there right now. The additional $200 over the Oculus, for example, seems to be made up for by the advanced touch controllers which come with the Vive. If you have money to burn and an interest in virtual reality, for now, HTC’s Vive is the device to beat. 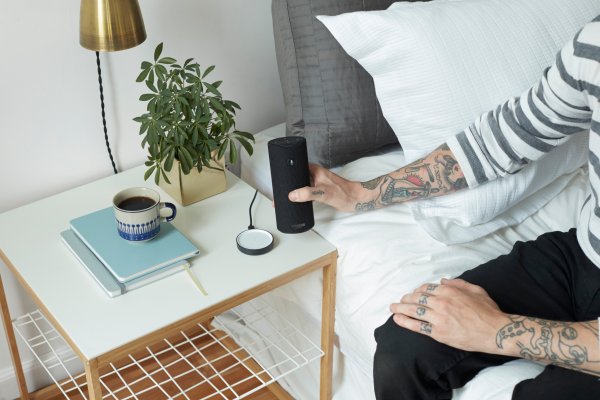 Review: The Amazon Tap Will Leave You Wanting More
Next Up: Editor's Pick