The Environment Is Finally Making an Impact on the Democratic Race

Hillary Clinton speaks at a rally in Purchase, on March 31, 2016.
Seth Wenig—AP
By Justin Worland

A testy exchange on Friday between the Democratic rivals Hillary Clinton and Bernie Sanders over their respective ties—or lack thereof—to the fossil fuel industry led both campaigns to accuse the other of spreading false information.

The spat, which began with the circulation of a video showing Hillary Clinton lose her cool when confronted by a Greenpeace activist, centered largely on the narrow debate over what constitutes a donation from the fossil fuel industry.

But the video—filmed at a Thursday rally and released by Greenpeace—also may also have brought climate change the most attention the issue has received in nearly a year of non-stop campaigning.

Clinton dispatched New York Mayor Bill De Blasio to defend her record of pushing for measures to combat global warming while Sanders’ campaign manager suggested that his rival would not follow through on her promises because of her connections to energy companies.

Democratic voters see climate change as a key election issue in this election cycle with 68% of the party’s voters calling it a “very serious problem,” according to a Pew Research report. But nonetheless global warming has received little attention in the presidential race.

That may be because there’s not much to talk about. Both candidates have laid out aggressive plans to reduce carbon emissions that make those President Obama’s initiatives look tame. Clinton aims to produce 33% of the country’s electricity from renewable sources by 2027 while Sanders aims for 100% renewable energy by 2050. Both opposed the Keystone XL pipeline.

More recently ahead of the New York primary, both have said they support the state’s ban on oil and gas fracking. Indeed, most political groups focused on the environment have remained neutral in the contest.

That’s why it makes sense that this week’s feud would be centered on a highly-technical debate. Clinton—like any other candidate for federal office—is legally barred from taking any direct money from corporations. She can and does take money from the people employed by fossil fuel companies. But so has Sanders. The Sanders campaign argues that Clinton has relied on fossil fuel lobbyists to raise money, and that’s fundamentally different.

“You cannot take on an industry if you take their money,” said Jeff Weaver, Sanders campaign manager, in a statement. “If the Clinton campaign wants to argue that industry lobbyists giving thousands of dollars to her campaign won’t affect her decisions if she’s elected, that’s fine.”

But no matter how you define a fossil fuel donation, either Democratic presidential candidate would be the most ardent supporter of addressing climate change ever to be nominated as a candidate for president from a major political party.

— With reporting by Sam Frizell 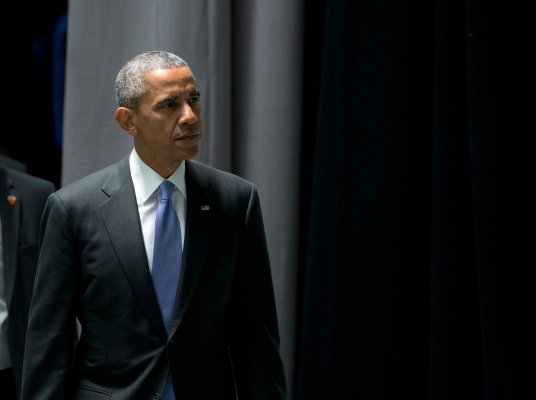 Obama Says Trump 'Doesn't Know Much' About the World
Next Up: Editor's Pick