These Are the 5 Best HTC Vive Launch Games

Oculus’ two-handed Touch controller should rectify this disparity when it ships later this year. But until then, the Vive leaves the Rift in the dust, its touch controls so intuitive that they seem an essential part of the virtual reality experience.

Here’s a list of our five favorite Vive experiences so far.

Wing donuts at a frowny floating computer. Make a compact disc and carrot smoothie. Joggle two-liter bottles of soda until they detonate.

Owlchemy Labs’ Job Simulator turns busywork into a carnival of irreverent gestures, laying playgrounds of objects before your Mickey Mouse-gloved hands and letting your imagination do the rest. The year is 2050, robots have supplanted human labor, and so it’s left to virtual reality to remind us what line-cooking, office-cubing and store-clerking was like.

Couple tinker toys with Newtonian physics and the ability to maneuver all those bits and bobs with your hands and you get Northway Games’ funky builder. Click a button and watch your creations amble off in whatever direction you’ve aimed them. Making progress means getting your inventions to endpoints in levels that grow increasingly convoluted.

Can you build a basic scooter that will roll in a (relatively) straight line? Another with the suspension of a Batman-ish Tumbler that can clamber over a bed of cubes, cylinders and pyramids? How about a series of rollers with 360-degree rotating legs that can climb, caterpillar-like, up a bunch of steps?

Feeling more artistic? More a pointillist or taffy-puller? How about a calligraphist of the unknown? Tilt Brush lets you turn the air around you into a painterly montage of gorgeous chromatic light. And it’s not just a 3D brush with bottomless reservoirs of paint. Flick a selection tool and you can add twinkling stars, smoke, swirls of blinking neon — or frame your creation against a cosmic backdrop.

HTC partner Valve takes a swing at virtual reality with a bunch of Portal-flavored demos. Visit the top of a mountain by way of vertigo-inducing vantage points in what amounts to a VR-movement tutorial, teleporting around (including over to a stomach-dropping precipice) by simply pointing a wand and clicking. Slingshot spheroid robots (styled after Wheatley from Portal 2) at piles of boxes in a warehouse in an obvious nod to Angry Birds. Pull the vibrating string of a bow to fire arrows at spear-waving munchkins trying to storm a tiny castle, the tracking precise enough to distinguish between shooting protective helmets off heads versus body shots.

It’s breezy proof-of-concept stuff, but an obvious go-to showcase, say a friend drops by and you want to show them what the whole VR thing’s about.

The Gallery: Call of the Starseed

Cloudhead Games’ The Gallery: Call of the Starseed exemplifies why virtual reality’s breaking wave of whatchamacallit experiences work best when moving you gradually through otherworldly venues in lieu of barf-o-rama spectacle.

Call of the Starseed kicks off an episodic story inspired by 1980s dark fantasy films and old-school graphical adventure games, sending you after a missing sibling and through a gauntlet of environmental puzzles. But it’s just as much about the thrill of using two hands to perform intuitive actions, like holding a flickering candle up in near darkness to tease the mysteries from a hand-scrawled note. 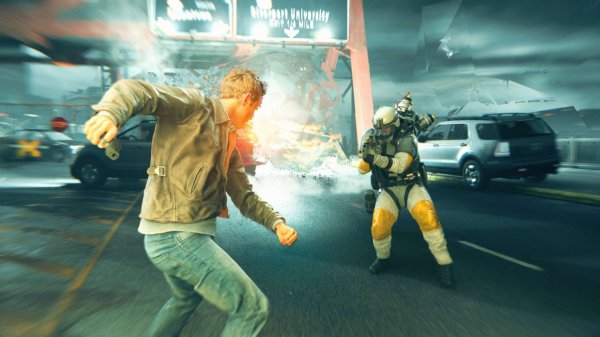 Review: Quantum Break Has Great Actors But a Meh Story and Gameplay
Next Up: Editor's Pick