Vermont Governor on Marijuana Legalization: It's What 'Enlightened States' Do

In the next few weeks, as Vermont Gov. Peter Shumlin nears the end of his time in office, his state could make history. If he has his way, Vermont will become the first state in the union to legalize marijuana through its legislature. The four states that have already legalized recreational pot—Colorado, Washington, Oregon and Alaska—all did so by taking the issue to voters through ballot initiatives. The Vermont Senate passed a marijuana legalization bill in February and it is currently being debated in the House.

TIME spoke to Governor Shumlin, a Democrat, about the war on drugs (“failed us miserably”), what he’s learned from other states (“no edibles”) and his personal experience with marijuana (“we inhaled”). The interview has been edited for brevity and clarity.

TIME: You’ve called problems with heroin addiction in your state a “full-blown” crisis. Do you see any connection between legalizing marijuana and problems with that illegal drug?

Shumlin: You can understand why someone would ask. And the answer is this, I do see them as separate. We have an opiate problem. Oxycontin has been handed out like candy, and that has led to the full-blown heroin crisis America is facing today. On marijuana, we have just the opposite challenge. The war on drugs has failed us miserably when it comes to marijuana policy, which is why so many states are by referendum legalizing marijuana. I’m hoping that Vermont will be the first state that does it legislatively because we have learned from the states that have made mistakes doing it by referendum. We are trying to pass the first cautious, sensible marijuana legalizing bill in the country.

What makes it more cautious and sensible than others?

What I meant by that is: No edibles. And you can only have a small amount of marijuana at one time, an ounce or less. Tax rates that are low enough to drive out the black market drug dealers. No smoking lounges. In other words, avoiding the pitfalls and embracing a more logical policy. About one in eight Vermonters admit to buying recreational pot on a monthly basis. We decriminalized an ounce or less, so you virtually get less of a criminal penalty for buying [small amounts of] pot than you do speeding on the highway. Although we wish you wouldn’t smoke pot, just like we wish you wouldn’t drink too much, we’re going to let you do it without getting in trouble with the law—but you still have to go buy it from a drug dealer? They don’t care what they sell you from their cache, whether it’s marijuana or other drugs. They don’t care how young you are. That’s why we moved to a regulated market for alcohol.

So you feel that doing this legislatively rather than by referendum is giving you more control over the process?

Absolutely. Let’s just take where we are right now in Vermont. Prime Minister Trudeau has said he’s going to legalize it within two years in Canada, and that’s our northern border. Our southern border is Massachusetts, and they’re having a referendum this fall. Frankly, if theirs passes, it gives us all the negatives of a bad marijuana bill and none of the positives. They can have up to 10 ounces. They’ve got edibles that have led to problems in Colorado with kids getting access and adults not knowing how much of this candy to eat. We have other states in the Northeast that are talking about moving toward legalization by referendum, including Maine. So Vermont needs to be proactive. We need to pass a cautious thoughtful bill that puts drug dealers out of business, gets this stuff out of the hands of kids, and gets all the benefits of a regulated market. And use the revenue to fight addiction generally.

Do you believe marijuana is less dangerous than alcohol, as reform advocates often claim?

This is what I know. I don’t want Vermonters smoking pot. It makes you kind of goofy and unproductive. I have alcoholism in my family, and I gotta tell you, that’s a really bad idea. It destroys lives, destroys families. I also don’t think you should smoke cigarettes. I can guarantee you that will kill you early. But I’m always surprised that we talk about pot as if we don’t have legal alcohol and legal tobacco sales. Government doesn’t want you doing any of those things in excess but to continue to pretend that by outlawing marijuana, you’re keeping it out of the hands of kids and adults is a level of denial that as governor—I can’t live in La La Land …

When we had this debate—to legalize, not to legalize—the reasons to not legalize are almost always as if you don’t have a problem already. Like, what’s it going to mean for our kids? Well, kids will tell you it’s easier to get pot in Vermont than it is alcohol. Then they say, what about people who are drugged driving on the roads? Well, what about the one in eight Vermonters who are using recreational marijuana right now? So if you’re willing to acknowledge that you have a problem, you’re much better dealing with a regulated market than an unregulated market.

Both heroin and marijuana are currently viewed as “Schedule I” drugs by the federal government. What do you think about those being put legally on par, and should the government reclassify marijuana as Sen. Bernie Sanders has advocated?

I agree with Sen. Sanders that we should make the federal change. I’m also a governor. Governors can actually get things done. And if I lived under the illusion that this congress would get anything done that was sensible, I wouldn’t be trying to do it myself.

On edibles, do you believe they should never be legal or just not be legal until problems with them have been better addressed?

I’m just saying: go slow, be cautious, let’s go about this very carefully. I���m not saying never. I’m just saying let the other states that are wrestling with edibles continue to wrestle with it. When you ask [Colorado] Gov. Hickenlooper, ‘What are some of the problems you’re having?’ The first words out of his mouth are ‘Don’t do edibles.”

I think Colorado has found that it’s been a positive for the economy, not a negative. When I suddenly find that my niece is going skiing with her college buddies in Colorado instead of Vermont, and they had never gone skiing in Colorado before on spring break, it doesn’t entirely escape me that there might be some allures to Colorado today that they didn’t have a few years ago for college-age kids—or young people who are looking for jobs. Denial has never been a good economic development strategy. And if I didn’t believe that by regulating, you’d have a better shot getting it out of the hands of kids—having a regulated product where you know what’s in it and driving the criminal element out of the market—I wouldn’t be proposing this. I think it’s going to make our state better and stronger, not weaker.

There’s a lot of talk about California possibly legalizing by referendum in 2016. What effect would that have on other state legalization efforts?

There is no question that the war on drugs has failed when it comes to marijuana policy, that America is going to move to a more sensible policy state by state. And I think the more enlightened states are trying to get ahead of this one … We’re all spending huge amounts of energy focusing on the evils of pot smoking and we hardly talk about the fact that in 2010, we sold enough drugs legally through our pharmacies in the form of Oxycontin to keep every adult American high for a month. That has led to death, destruction, addiction to heroin that’s affecting every state in America. And then we flip out about the possibility that we could move to a more sensible approach to marijuana. I want to drive the drug dealers out of the pot market. I’m also proposing that our physicians limit the number of Oxycontins that they can pass out for minor medical procedures. I’m trying to take both on, head on.

Vermont Sen. Bernie Sanders has also talked openly about using marijuana. Have you ever tried it? 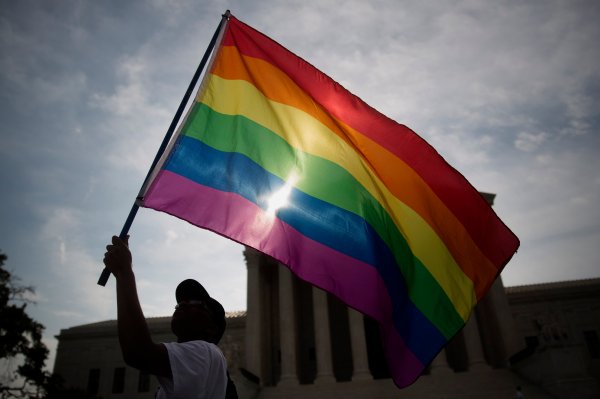 Why So Many States Are Fighting Over LGBT Rights
Next Up: Editor's Pick