Meet the Iraqi Refugees Who Are Going Back to Iraq

For the Doski family, the arrival to northern Iraq’s Erbil International Airport last week was bittersweet.

Fayez Al Doski waited with his wife and two children as immigration officers went over the one-way travel documents issued to them by the Iraqi embassy in Germany. Like tens of thousands of other asylum-seekers last year, he paid smugglers to take his family to Europe, joining the more than 86,000 Iraqis arrived on the shores of Greece in 2015 alone.

“I sold my car and I sold everything in my house,” says Doski. The family flew to Turkey, tossed their passports and paid smugglers $7,000 to get them to Germany. But it didn’t turn out to be the utopia they had imagined.

“It was horrible,” says Doski. He describes bad food and life in cramped quarters with other families from the Middle East, North Africa and Afghanistan. “The kids were having problems.”

It didn’t help that Doski wasn’t allowed to work. The family was left to depend on a stipend from the Germany government. Doski had big plans to get job, a home for his family, put his kids in a good school and start a new life, but it wasn’t that easy. And after four months in Germany, they gave up, saving the money from German stipend and buying tickets home to Iraq. “This is what’s left from $7,000,” he says, pulling out a couple bills at the arrivals gate in the airport. “Forty euro.”

The International Organization of Migration (IOM) assisted more than 1,000 Iraqi migrants voluntarily return from Europe in February alone, and some 5,000 since October of last year. In February the demand was so great that that IOM chartered a flight from Belgium to Baghdad to return 106 in one day. “Many of them tell us they did not find what they expected to,” says Sandra Black, a spokesperson for IOM in Iraq, which helps migrant families trying to return home from Europe.

Read More: Trapped in No Man’s Land in Greece

Like the Doski family, many Iraqis in Germany didn’t wait for assistance and simply saved or borrowed money to buy they own tickets home—which means the number of returning Iraqis is likely much higher than the IOM figures. “There is no plane from Germany that doesn’t have them,” says a security guard in the arrivals hall.

In their home in Bardarash, about 20 miles east of Mosul, Doski shows the empty space where they used to have sofa. They sold that to finance the trip to Germany, along with his wife’s sewing machine and the bit of gold she had. “Now I feel embarrassed,” he says.

Doski shows videos of their dangerous crossing of the Mediterranean, with people on the boat praying to God as they see the Greek shores approach. He shows more pictures of the family in Germany, posing by monuments and playing in the snow.

On top of the tough conditions in Germany, their future as asylum-seekers was uncertain. Most Syrians seem likely to get automatically get refugee status in Germany, but for Iraqis it’s less clear, though many experts believe they will eventually be granted asylum. “They gathered information mostly by word-of-mouth, some by social media,” says Black. “[They] may not have been fully informed about the asylum application processes in the countries they were going.”

After months of waiting in Germany, Doski still didn’t know if they would be granted refugee status. The country has been overwhelmed by the wave of migrants, having received nearly 500,000 new asylum claims in 2015.

Some returnees recalled attacks on fellow migrants and refugees, saying it made them feel unsafe in Europe. Right wing groups have protested the influx. In Saxony, Germany in February a migrant shelter was burnt to the ground while onlookers cheered.

According to the IOM most Iraqis left for Europe because they felt they had no future in Iraq. Many were were already displaced from areas under ISIS control or where fighting continues with the militants. They had been living in relatively safe areas but return home was not an option. Chancellor Angela Merkel’s seeming welcome may have been a pull factor. Many, like Doski made a rushed decision to have his family smuggled to Europe, fearing the route would be shut. Now a deal between the EU and Turkey to try and close the smuggling routes into Europe is making the trip more difficult, and it may already have affected the number going. There were more than 62,0000 registered arrivals on the shores of Italy and Greece in February but in March that number is below 40,000

The situation in Iraq hasn’t changed. The fight against ISIS continues, and economic opportunities are few. In the northern Iraqi Kurdish areas the economy is in such bad shape that the Kurdistan Regional Government (KRG) can’t pay the civil servants or the peshmerga fighters their salary.

For those returning voluntarily, the IOM offers reintegration assistance, including cash, training or even some funds to help them start a business. But Doski and his family are starting again from scratch. They have no money and he is looking for a new job to support his family. “I regret that I went there,” says Doski. “But thanks be to God, we are home.” — With reporting by Salar Salim 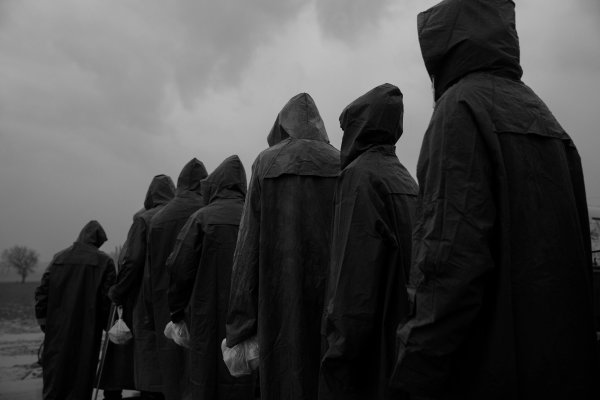 A New Purgatory for Thousands of Refugees
Next Up: Editor's Pick