Hillary Clinton reminded chanting Bernie Sanders protesters at an event in Westchester, New York, that she leads the Vermont Senator in the popular vote totals in the Democratic primary, and scolded them to “hear the contrast between my vision” and her opponent’s.

The exchange came during a Clinton campaign event in Purchase, New York, where a group of pro-Sanders protestors began chanting, “if she wins, we lose.” As they left the auditorium, Clinton’s rebuttal came quickly. “I know the Bernie people came to say that,” Clinton said, “we’re very sorry you’re leaving.”

“As they’re leaving, I want to say I have earned 9 million votes in this election,” Clinton said. “I have 1 million more than Donald Trump and I have 2.5 million more votes than Bernie Sanders.”

Then she criticized Sanders’ free college tuition program, pointing out that the Vermont Senator’s plan puts funding in the hands of the country’s governors, many of whom are Republicans.

“He goes around telling young people he’s going to give them free college. Well I wish it were so,” Clinton said. “But you go and read the fine print, which anyone should do when someone makes a promise about something being free—you read that fine print and it basically says, yeah, it’ll be free if the governors of America put in about $28 billion.”

A small but vocal group of Sanders supporters have said recently they would not back Clinton’s White House bid if she is the nominee. The so-called “Bernie or Bust” movement has reached high-profile levels, with Sanders backer and actor Susan Sarandon saying she would consider voting for Donald Trump over Clinton.

Clinton leads Sanders by nearly 300 pledged delegates with about 60% of the delegates assigned.

Clinton will have to bring back Sanders supporters if she wins the nomination. “I talk to some of the young people and I say, you know, you may not be supporting me but I’m supporting you,” Clinton said as the protesters left. “I will work for you, I will fight for you, I just wish that there were an opportunity to actually talk and listen to each other. We’ve got to unite when this primary fight is over we gotta unite and make sure weve got a Democrat in the White House.” 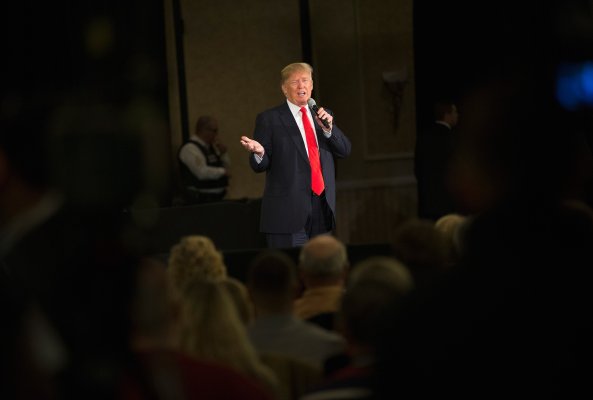 Trump U-Turns Into a Corner
Next Up: Editor's Pick