WASHINGTON, DC - MARCH 31: Prime Minister Shinzo Abe of Japan (R) greets President Park Geun-Hye of the Republic of Korea as President Barack Obama looks on during a meeting at the Nuclear Security Summit March 31, 2016 in Washington, DC. World leaders are gathering for a two-day conference that will address a range of issues including ongoing efforts to prevent terrorist groups from accessing nuclear material. (Photo by Dennis Brack-Pool/Getty Images)
Pool—Getty Images
By Maya Rhodan

Through Obama’s two terms in office he’s used the Nuclear Security Summit to advance the U.S.’s goals of curbing nuclear proliferation. Only nine countries are known to have nuclear weapons, including the five members of the National Security Council. The country believed to have the greatest nuclear arsenal, Russia, is notably absent from this year’s summit, however.

The nuclear deal the U.S. and other permanent members of the United Nations Security Council ironed out is a nod to the efforts promoted at the summit, but with the threat of terror groups like ISIS getting their hands on nuclear weapons looming large, this year’s event has taken on new focus. In the wake of the attack in Brussels, the interest in preventing ISIS from gaining more power has only grown.

Obama will meet with a group of world leaders Friday to discuss the threat of ISIS and the steps necessary to prevent the terror organization from gaining access to nuclear materials.

“A terrorist attack with an improvised nuclear device would cost an enormous amount in terms of human life, and could also have profound political and economic and environmental effects on global security as well,” said Deputy National Security Advisor Ben Rhodes on a call this week. “This is a challenge that demands the type of international cooperation that we are promoting through the Nuclear Security Summit process.”

The Nuclear Summit also provides an opportunity for the president and other world leaders to discuss the threat posed by North Korea. Earlier this year, the North Korean leadership claimed to have successfully conducted a hydrogen bomb in an underground test. The test was not confirmed independently, but the threat of North Korean nuclear proliferation is real.

On Thursday, President Obama and high level officials met with President Park Geun-hye of South Korea and Prime Minister Shinzo Abe of Japan for a meeting to discuss the threat.“Trilateral security cooperation is essential to maintain peace and stability in Northeast Asia, deterring the North Korean nuclear threat, and the potential of nuclear proliferation,” Obama said after the meeting.

The president is also using the gathering to address issues he considers threats to global security, but many of his political opponents consider distractions from more pressing threats. On Thursday, Obama and President Xi Jinping of China released a joint statement on the Paris Climate Agreeement, which they both agreed to sign on April 22. President Obama has called climate change the “greatest threat” to global security. 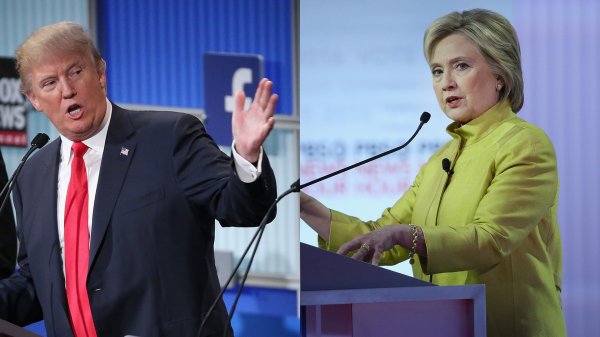 Watch a Virtual Debate Between Clinton and Trump
Next Up: Editor's Pick