My 'One Shining Moment'

And there I was, about a minute into the montage, to the left of the screen, running off the Princeton bench after the Tigers upset UCLA in the first round of the 1996 tournament. I was a little-used reserve on that team, and was in the shot for a blip, wearing my warmup. Basically, I was an extra: not exactly the way I dreamed of appearing in “One Shining Moment” as a kid. But hey, I’ll take it. At least my girlfriend at the time, who also grew up loving college hoops — and the song — said she was impressed.

In most sports, after a championship game TV viewers flip the channel or head to bed. Not so in college basketball. For three decades, “One Shining Moment” has followed the men’s national title game: with keyboards, trumpet filigrees and R&B stars like Pendergrass and Luther Vandross crooning lyrics such as “And when it’s done/win or lose/you always did your best/cause inside you knew,” the tune doesn’t skimp on the schmaltz. Still, it hooks you in. Players dream of appearing in it, and fans can’t get enough of it. Last year over 10 million people watched “One Shining Moment” on CBS. The 2016 montage, which will run on TBS for the first time, will mark the 30th straight year it has aired (CBS aired the prior 29 editions). How did this song become the soundtrack of March Madness?

Like for so many endeavors, its inspiration came in a bar. In 1986, after finishing a gig at the Varsity Inn in East Lansing, Michigan, David Barrett — who a few months later would be described in a CBS press release as a “modestly successful club singer” — took a seat at the bar. He couldn’t help but notice the waitress next to him. “She was more beautiful than Helen of Troy,” Barrett says. Larry Bird highlights were playing on the barroom TV. In an attempt to chit-chat with the waitress, Barrett expounded on Bird’s greatness. Not all that impressed, the waitress left. But Bird’s exploits stuck in his head. Barrett wrote a song title — “One Shining Moment” — on cocktail napkin.

The next day, while waiting for a friend who was running late to brunch, Barrett scribbled the lyrics on another napkin. He went home and wrote the music in 20 minutes. “It was as pure of a writing moment as I’ve ever had,” Barrett says. Later that year, he was crashing at a friend’s apartment New York City during the NBA finals — Bird’s Celtics vs the Houston Rockets. Barrett told his pal, then-Sports Illustrated writer Armen Keteyian, that he had written a pretty good song. Keteyian informed Barrett that CBS — where Keteyian now works as a correspondent for 60 Minutes Sports and 60 Minutes — was looking for sports theme. Barrett recorded “One Shining Moment” and sent it in; in a January 1987 press release, CBS announced it would air the song after the upcoming New York Giants-Denver Broncos Super Bowl. “The song was chosen by CBS Sports over many familiar tunes and original recordings by popular artists because it so aptly identified an athlete’s moment of glory,” the network wrote.

But the broadcast ran long, and “One Shining Moment” got cut. A CBS executive, however, told a disconsolate Barrett that since he wrote the song for basketball, it belonged with the Final Four. Wise move. “One Shining Moment” perfectly captures the emotions of March Madness: the giddy underdogs, the enraged coach, the crying senior who last his final game.

How? During the instrumental intro, we see a flurry of activity — flipping cheerleaders, dancing players, mascots running, jumping, waving their costumed arms. (In 1990, the Connecticut Husky dove headfirst into the foul lane). Then the ball is, indeed, tipped; the vocals begin. Vandross, who recorded his version of the song before his 2005 death, has sung One Shining Moment in 12 of the last 13 editions. He’ll do so again on TBS; NE-YO will sing team-specific versions on TNT (for North Carolina) and truTV (for Villanova). In 2010 Jennifer Hudson got the call, but fans disapproved of her frequent appearances in the montage. No offense against Hudson, but “One Shining Moment” nuts have a purist streak. Keep it all about the basketball. “We got a little bit of flak for that,” says Sean McManus, chairman of CBS Sports. “But that’s about the extent of the controversy we’ve had around ‘One Shining Moment.'”

The Cinderellas always get their due. Few will forget Hampton coach Steve Merfeld getting a lift from one of his players after the number 15 seed stunned No. 2 Iowa State in 2001. During the “it’s more than a contest / it’s more than a race” crescendo, bet on seeing a wounded player — check out a bloodied Marcus Camby during the ’96 edition. Sad fans and band members are a staple: Villanova’s Roxanne Chalifoux, aka Crying Piccolo Girl, inspired many memes in 2015.

Schools left out of the montage feel jilted; fans will share their frustration. “We had a theory in the edit room,” says Shawn Robbins, a CBS producer who worked on “One Shining Moment” from 2011-2014. “If you want to be in ‘One Shining Moment,’ win the tournament. You’re probably going to be in the last shot.” Confetti falling on the title-winners, holding the championship trophy, hits the right closing note.

The song holds special meaning for the players. After the title game, the winning team stops its on-court celebration cold to watch “One Shining Moment” on the Jumbotron. “I remember watching the song very clearly,” says Chicago Bulls center Joakim Noah, who won back-to-back titles with Florida in 2006-2007. “It’s the moment you can finally exhale a little bit. It’s a beautiful part of the culture.”

Indeed. By the way: I’m now married to that girlfriend who liked my shining moment, brief and benchwarming as it was. Coincidence? Think I owe David Barrett a beer. 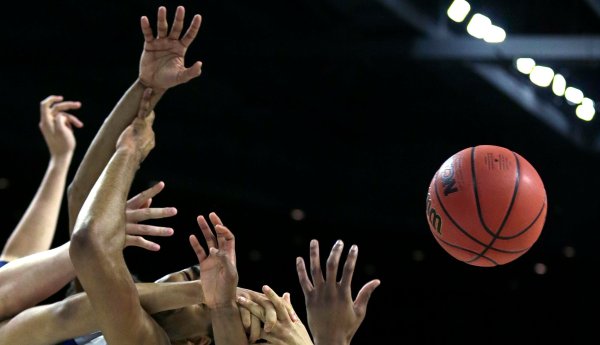 The NCAA Final Four Ranked by Academic Performance
Next Up: Editor's Pick