Sounding off on Linklater's Hit Parade

Almost as appealing as the cast of newcomers Richard Linklater assembled for Everybody Wants Some!! is the inspired, genre-crossing soundtrack compiled by the director with music supervisors Meghan Currier and Randall Poster. Spanning everything from hard rock to new wave to country, funk and disco, it’s available on CD and cassette with 16 tracks, but fittingly the double-LP vinyl version offers eight additional songs. Linklater, who says he “was the guy who listened to a little more new-wave-y stuff” when he played college baseball at Sam Houston State University in Huntsville, Texas, chatted with TIME about a few of his favorites.

“My Sharona,” the Knack

“The Knack was the greatest teen-sexual-angst band of all time. Every song was about the same thing, and that’s what being a young guy is all about.”

“That song is so pivotal in cultural history. It’s the Rosetta Stone of hip-hop. I told the cast, ‘We’re just going to ride around and listen to this song, all 13 minutes of it.’ That sets the tone for the whole movie.”

“Everybody Wants Some!!” and “Ain’t Talkin’ ‘Bout Love,” Van Halen

“Van Halen will always be a seminal band. They represented a changing of the guard in rock gods. I saw them in 1978, opening for Black Sabbath, and a lot of people speak of that as being a real game changer.”

“Give Up the Funk (Tear the Roof Off the Sucker),” Parliament

“What can you say? George Clinton and Bootsy Collins were the guys. I remember one of my college roommates had their album. It was a good era for R&B and funk.”

“Bad Girls,” Donna Summer “Nobody I knew would admit to liking disco. You might go out to a club to dance to it, probably wearing a ‘Disco sucks’ T-shirt, but you wouldn’t listen to it at home. But frankly, that stuff ages so well. I would rather listen to those songs than some of the sincere singer-songwriter stuff. The lyrics were always simple and repetitive–people make fun of that–but they hold up because of the beats. Disco was very sexual.” 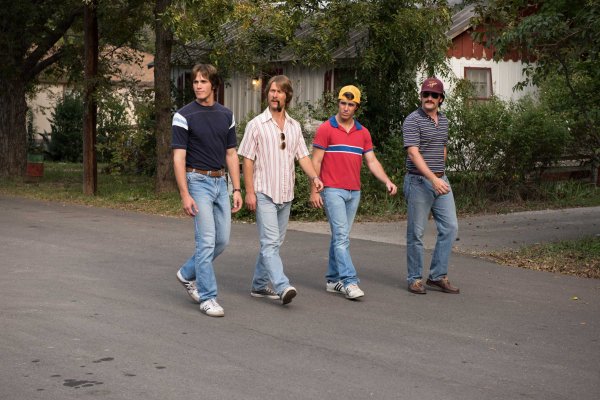 Review: Everybody Wants Some!! Deserves a Third Exclamation Mark
Next Up: Editor's Pick