The U.S. Plans to Increase Its Troop Presence in Europe in Response to an 'Aggressive' Russia

The U.S. plans to increase its troop presence in Europe with the rotation of an armored brigade “in the wake of an aggressive Russia in Eastern Europe and elsewhere,” the military announced Wednesday.

“This Army implementation plan continues to demonstrate our strong and balanced approach to reassuring our NATO allies,” General Philip Breedlove, the top U.S. commander in Europe, said in a statement. “They will see a more frequent presence of an armored brigade with more modernized equipment in their countries.”

Starting next February, continuous troop rotations will bring the U.S. Army’s total presence in Europe to three brigades, which are composed of about 4,500 troops. The Army also plans to replace and upgrade its current equipment in Europe.

Defense Secretary Ash Carter identified Russian aggression in Europe as one of five key challenges when he previewed the Pentagon’s 2017 defense-budget request last month. The Pentagon asked for $3.4 billion, quadruple the previous year’s funding, to support its European Reassurance Initiative, an operation launched in 2014 after Russia annexed the Crimean Peninsula. 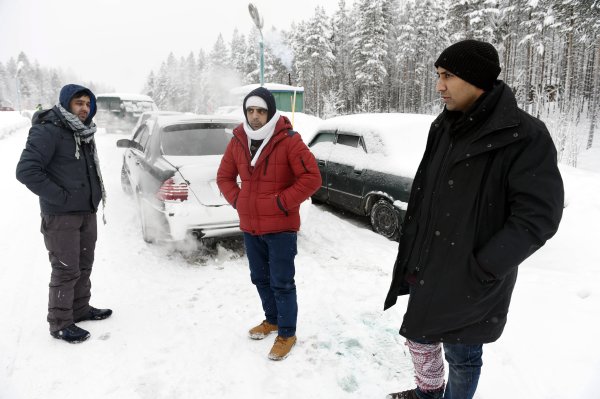 Finland and Russia Temporarily Close Border to Migrants
Next Up: Editor's Pick