Rep. Raúl Grijalva: How to Prevent the Next Oil Spill

Oil from the explosion of the Deepwater Horizon oil rig floats in the Gulf of Mexico near Orange Beach, Alabama, June 18, 2010.
Kari Goodnough—Bloomberg/Getty Images
Ideas
By Rep. Raúl Grijalva
Grijalva is a U.S. Representative for Arizona.

A little more than six years ago, a Senate committee held a hearing about a major blowout on a rig off the coast of Australia. At that hearing, we were assured such an environmental tragedy couldn’t happen in the United States. “Releases from oil and gas operations are rare,” a BP executive said, “and the application of technology has enabled a dramatic reduction of releases from our industry over the last 30 years.”

Less than six months later, the Deepwater Horizon exploded, and the BP oil spill started releasing nearly 5 million barrels of oil in what is widely considered the worst environmental disaster in U.S. history. Numerous investigations into the incident found that much of the blame could be traced to a culture of complacency in the offshore oil and gas industry that led companies to believe that their past luck in avoiding blowouts meant that future ones were almost impossible. In fact, they were walking a tightrope with no safety net, with the regulations designed to protect the environment, and the public unable to keep up with the dizzying pace of the industry as it moves to deeper and more dangerous waters.

The Department of the Interior moved quickly to regroup and reorganize, instituting emergency safeguards and stricter reviews that allowed the industry to start drilling again. And drill they did, to the point that offshore oil production in 2017 is projected to set an all-time record. Unfortunately, it appears that the industry’s hubris and overconfidence may also be reaching record highs.

Their target now is the so-called “Well Control Rule,” which the Department of the Interior proposed last April, just shy of the five-year anniversary of the Deepwater Horizon. The rule finally–finally–proposed new standards for blowout preventers, the crucial backup-of-last-resort that failed catastrophically during the BP blowout, and incorporated other critical lessons learned from that disaster.

One would think that the offshore industry, chastened by the abject and obvious failure of their cutting-edge technology just a few years previously, and grateful to an administration that allowed them to return to work before these new standards were even in place, would work constructively to help enact these essential new safeguards.

But, perhaps unsurprisingly, they are acting like they’ve forgotten all about 2010, and are hoping that we have as well. The Gulf Economic Survival Team, an industry-allied group founded in 2010 to pressure the Obama administration to begin issuing offshore drilling permits as quickly as possible following the Deepwater Horizon, recently began a campaign to kneecap the Well Control Rule.

First they produced a report that hews to the standard and discredited industry playbook of claiming that every new regulation will decimate jobs and the economy, ignoring the lives and businesses that would be decimated if another Deepwater Horizon were to occur. Second, they began a campaign, aided by their Republican allies in Congress, to strong-arm the Office of Management and Budget in the White House into requiring another public comment period on the rule. Their goal is simple: delay the rule long enough until there’s a new occupant of the White House, potentially one that takes offshore drilling safety a little less seriously.

But this is a serious matter, and every new deepwater well is a roll of the dice. Low oil prices make this rule even more critical: While it’s easy for companies to prioritize safety when oil is $100 a barrel and the profits are gushing, at $35 a barrel companies may start to cut corners and “seek efficiencies.” Invariably, particularly for some of the smaller companies offshore, a commitment to safety is one of the first things thrown overboard when the financial outlook starts to sink.

The Well Control Rule is long overdue. Commonsense protections against another devastating offshore blowout are too important to be held hostage by economic scaremongering or pleas of “we’ve learned our lesson, it won’t happen again—just don’t put strong rules in place.” The administration, thankfully, seems to have learned the risks of complacency and overconfidence. The industry, unfortunately, seems to be taking a little longer to get the message. 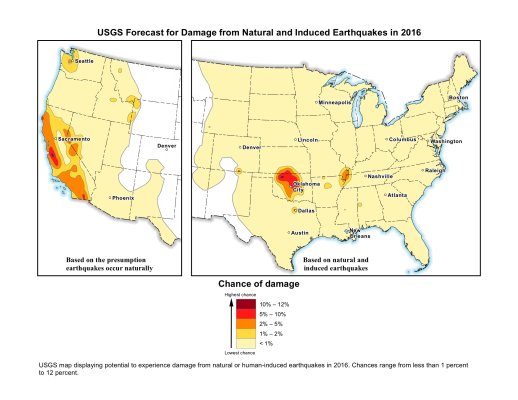 Oklahoma Has Growing Earthquake Risk
Next Up: Editor's Pick