What Life Is Like for Prisoners After Their Sentences Are Commuted

Barbra Scrivner wasn’t supposed to be in Washington. In 1995 she was sentenced to 30 years in prison for her involvement in a meth-distribution ring. Twice she tried to take her own life. But in December 2014, President Barack Obama commuted her sentence, freeing her to return to Fresno, Calif., to live with the daughter she missed out on raising over the 21 years she spent behind bars. And on March 24, 2016, almost exactly three years before her projected release date, she came to Washington to push politicians to do the same, and more, for others.

Decades into the “war on drugs” — with overcrowded prisons eating away at state and federal budgets and recidivism rates high among drug offenders — politicians on both sides of the aisle are recognizing that draconian policies weren’t that effective. Both the House and the Senate have bipartisan bills designed to chip away at mandatory minimum sentences that have forced judge’s hands in many instances. The bills would make some of the changes retroactive. There are other efforts too, like a change to federal sentencing guidelines, which led to the release of 6,000 federal prisoners over a period last fall. And as more changes come down the pike, there are more and more chances to examine the challenges and opportunities facing individuals upon their release from prison.

For his part, Obama is beginning to loosen up too. Compared with his predecessors, Obama had been unwilling to pardon or commute the sentences of prisoners early in his presidency. At one point, Professor P.S. Ruckman of Northern Illinois University went so far as to call Obama one of the “least merciful” Presidents in American history. As of Wednesday, when Obama shortened the prison sentences of 61 drug offenders, the total number of individuals whose sentences he has commuted while in office ticked up to 268. That remains far short of the thousands of prisoners many projected the President would release. About 44,000 people have applied to have their cases reviewed and sent to the Justice Department for clemency consideration, according to a recent report by Reuters. And a recent report by USA Today found that the focus on the clemency initiative has shifted focus from the traditional role of the pardon office. According to the report, there are over 10,000 cases pending.

Scrivner thinks all politicians should do more. When she was behind bars fighting for release, she became, in her words, a “poster child for clemency.” Her transition out has ushered in a new chapter. Now she’s a vocal advocate for criminal-justice reform.

“I understand why they say there should be mandatory minimums — there are certain specific cases where I see why it’s necessary,” she says. “But they have to be very specific. I think they need to leave the discretion up to the judges.”

When Scrivner left federal custody in July 2015, she says the experience was surreal. But soon after she got home, reality hit. Her recently deceased father had reverse mortgaged his home, and she wasn’t in a position to save the home. She went to a halfway house where she was told to get a job. She had no clue how, and the assistance she was given during her transition back into society, she said, didn’t help much.

“Back in the day, you go to a business, you say you want a job, they hand you an application, you fill it out, you hand it to them,” she says, mimicking a scribbling motion on a desk in front of her. She learned very quickly that was no longer the way things were handled — applications are now available online. But once she sat down to fill out job applications, she struggled with what to say.

“I must have put in about 100 applications, and I’m trying to figure out, So how do I write this? How do I sell myself?” she says. It’s not that she wasn’t gaining skills behind bars. While Scrivner was in prison, she took classes in sex and drug education, psychology, and social work. A recovering addict, she mentored in the drug-treatment program for 12 years. And she’s 11 credits away from earning her bachelor’s degree in biblical studies. She just wasn’t sure what to say and how to say it. “It was really hard and a little discouraging, but I wasn’t going to give up,” she says. Scrivner eventually moved to Portland, Ore., where she’s originally from, to be closer to family. Now she works for a nonprofit organization that helps people transition out of homelessness.

And although she does not think the re-entry system is designed for prisoners to fail, she does wish she’d had more help along the way.

The petite woman, with colorful tattoos dancing up her slender wrists, sat in the downtown D.C. offices of Families Against Mandatory Minimums, or FAMM, along with dozens of other former federal prisoners who had come to town to celebrate the organization’s 25th anniversary. For two decades the organization has advocated for the release of prisoners who’ve fallen victim to the nation’s draconian drug laws. Many of those gathered were women who had gotten caught up in schemes with their boyfriends like Stephanie Yvette George, who also spoke to TIME. Some of whom were released thanks to changes in the law. Others, like Scrivner and George, whose sentence was commuted by Obama in 2013, had pleaded with countless judges to no avail and ultimately had their fate handed down by the President — the only person with the power to free the hordes of nonviolent drug offenders who could have received shorter prison sentences had they been convicted under the current law. But they’d both come to Washington to share their stories with as many people who were willing to listen — journalists, activists and lawmakers.

For George, transitioning to life after prison is a constant challenge. Before her release, her 19-year-old son was killed — she last saw him when he was 15. Her goal is to ultimately mentor young people headed down the wrong path, either in juvenile facilities, group homes or schools, to serve as the role model she never got to be for her own kids. Getting there, however, hasn’t been easy. George has faced difficulty getting a job in the field she wants and is currently clocking about 20 hours a week at a chain restaurant in Florida.

“I pretty much just take it day for day,” she said bleakly.

If the conversations from that sunny March Thursday made anything particularly clear, it’s that life after prison is equal parts exciting, new, discouraging and lonely. “I’ve had many people say to me that prison infantilizes you because you’re told when to eat, what to wear, when to sleep, where you can move. You don’t have many choices,” says FAMM’s president Julie Stewart. “And then you get out and you have to make all of the choices.”

She adds, “It’s an unbelievable challenge. And yet we expect people to do it, and do it fairly quickly and easily and without going back to prison.”

Past data show that prisoners who were released under previous changes did not fall back into a life of crime at above-average rates, but anecdotally, their lives are a constant struggle. A little less than a year after her release from prison, Scrivner is on the right path. And yet, she says, it doesn’t always feel like it. Every day she faces an internal feeling of inferiority after being thrust into a society that has historically been tough on criminals. Her past is her biggest burden, and yet it’s her story that helps her connect with lawmakers and advocacy groups in her ongoing efforts to bring attention to criminal-justice issues.

“Every day I battle with that; I get up and I’m like, ‘I am a person in society. And I am doing good.’ And I need to walk with my head held high and not think in the back of my head, What would these people think if they knew where I just came from?” she says through tears. 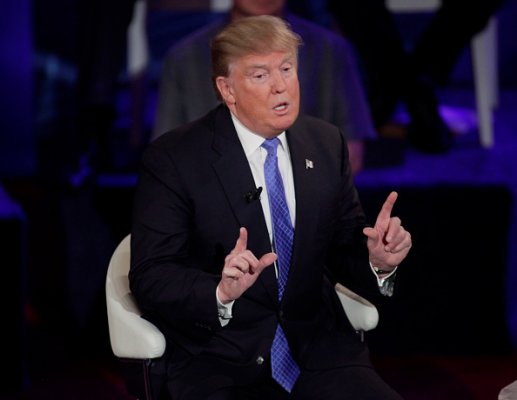 Trump Wants to Free the Nuclear Genie
Next Up: Editor's Pick