Donald Trump stirred controversy on Wednesday when he said in an interview with MSNBC’s Chris Matthews that “there has to be some form of punishment” for women who have abortions, were the procedure banned. As Matthews pressed the candidate to explain his specific views, which he summed up as “pro-life,” Trump elaborated that he also did not believe a man whose partner sought an abortion should be held legally liable.

The remarks immediately elicited reaction from politicians and activists on both sides of the debate. Anti-abortion conservatives distanced themselves. As Trump’s rival John Kasich put it, “of course, women shouldn’t be punished” for having an abortion. Current mainstream anti-abortion views tend to advocate for legal punishments for abortion providers, rather than for women, who are often referred to as victims of the crime rather than perpetrators. After the interview, Trump quickly issued a statement walking back his earlier remarks, clarifying that “the woman is a victim in this case as is the life in her womb” and that the provider would “be held legally responsible, not the woman.”

Anti-abortion advocacy groups sometimes claim that a legal stance sympathetic to women who seek abortions is a historically accurate version of the way abortion was treated prior to Roe v. Wade. But the real history of criminalized abortion is a little more complicated.

It is true that U.S. law when abortion was illegal tended to target the doctor or other providers. TIME’s own archives show the punishments of those involved with abortion. A 1936 story tells of a trial of 14 people who were charged with running “an amazingly widespread and efficient chain of Pacific Coast abortaria extending from Seattle to San Diego.” A 1941 issue describes Dr. Nathaniel Collins, who was arrested during a raid of “one of Manhattan’s biggest abortion mills.” And a 1944 report covered the conviction of “one of the best abortionists in the U.S.,” Mrs. Alice Mary Heinrich Chairman, who was called “a good practitioner” in a field where “most abortionists [had] only a smattering, if any, of medical training.”

And the idea of the woman as the victim of the crime shows up in the records, too. A 1962 TIME article highlighted the issue of unsafe abortions being performed “on kitchen tables and the back seats of cars,” and the unfortunate women who got involved in them—who were, as the article explained, regularly the subject of tabloid headlines like “BODY OF ABORTION VICTIM FOUND IN PARK.” (It’s worth noting, however, that being treated as a victim did not mean there were no social or health consequences for someone who had an abortion.)

But it is not the case that U.S. abortion bans have historically been targeted solely at providers. Though enforcement varied, the letter of the law did often say having an abortion, not just providing one, was a crime.

As early as 1845, New York made having an abortion a crime punishable by three to twelve months in prison. In 1958, a TIME story on a new report on the state of abortion in the U.S. explained the modern version of that law:

Women could also be jailed for refusing to testify against their doctors, even if they were not arrested for their own part in the procedure.

Trump’s original statement that a man whose partner had an abortion would not be liable is also in line with history, as described by Before Roe V. Wade: Voices that Shaped the Abortion Debate Before the Supreme Court’s Ruling: even in cases where a couple had mutually agreed to seek an abortion, the threat of jail did not fall on the man involved.

Trump’s comments came the same day the Food and Drug Administration approved a new label for an abortion-inducing drug. 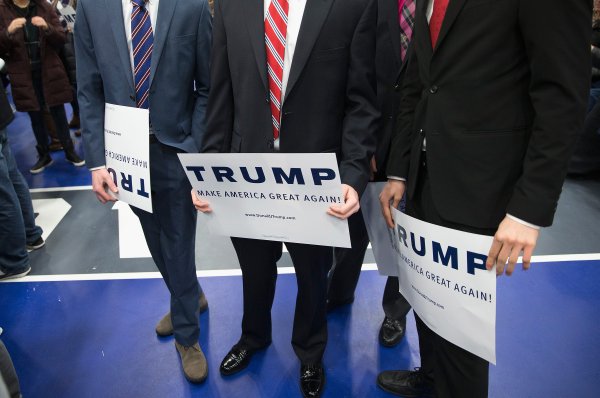 The Truth About the Trump 'Chalking'
Next Up: Editor's Pick